Fumbling for my car keys, I reached down into my bag and found them tangled up into the red flashlight that I had previously added onto my new collection of nonsense key chain mania. I didn’t need the flashlight, besides it was too heavy anyway. It was 6:45pm and pitch dark outside. The streetlights are a blessing around here. I had to make the 7 o’clock meeting. This was my first AA meeting I was ever attending.

I hurried out to my car and zoomed off to the Catholic Church where they were holding the meeting. I knew where the church was, but when I pulled in, there were five different buildings on the property itself. I pulled up to where it was lit up the most. I looked around and was relieved to see other people were pulling in too. I waited for a couple of minutes. I then realized that the people who were coming out of their cars had children with them. It was more of a school-type of church with classrooms lit up on the right hand side of the building. I got out of the car and went over to read the list of services they had available. They were all CCD listings. I walked back to my car and drove around the other buildings.

Everything was dark and I couldn’t see where I was going. I drove back over to the lit parking lot area and got out of my car to head inside the building. The doors were locked. One of the nuns saw me through the big windowed doors and started walking over. She opened the door and asked if she could help me.

“Where is the lower chapel?” I asked, trying to be discreet about my whereabouts.
“Oh, for the AA meeting?” she blurts out, loud enough for the parents to take a peek over at me.
“Yes.” I said, almost giggling because of my embarrassment.
“Oh dear,” she says as she looks over at the lower chapel located across the cemetery, “You may have hard time seeing because it's so dark down there, but it’s in that old stone church house, but there aren’t many lights outside. Please be careful.”

(This photo below was taken the next day while it was bright enough out to see where I was walking.) 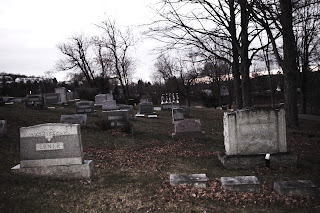 I head back into my car and start driving toward the cemetery. There is no road leading to this building- only a pathway through the cemetery. Great. This should be lots of fun. So as I was walking through this dark cemetery with the moon shining on me, I kept hearing a little howl from beyond. I felt like I was in some weird horror movie. I tried to ignore it and pretended that it was way too far away to even sense or see me. I heard the howl louder now. I started walking faster and faster until I tripped and fell. I fell onto a tombstone that had a family friend’s name on it. I freaked out and ran back to my car. As I sat in my car, I noticed that my knee was bleeding. I then saw the little puppy that was walking through the cemetery howling---actually whining.

I tried catching my breath and gave it another shot. I really needed to go to this meeting. Now that I knew the howls weren't coming from some hungry wolf, I walked with a little more ease toward the big stone cathedral building. There were red lights illuminating the chapel windows and there were two doors on each side. The architectural art on this building was amazing—almost had a European touch to it. I tried opening each door. No luck. It was way too dark and at this point, I wished I hadn’t removed my flashlight from my key chain previously.

I walked back over to my car frustrated and seriously upset and drove home. Screw it. God doesn’t want me to go to AA so I’ll go home and have a drink. Thoughts went through my head about giving up and just not caring at all. The frustration of not being able to find a simple meeting had me rustling in the freezer for the bottle of vodka until something nudged at me.

“Go to the directory on the computer.”

I ended up finding an 8 o’clock meeting a few towns over. I jumped back into my car and said a little prayer as I zoomed off once again. I then got stuck in heavy traffic. I couldn’t believe my luck! I was about to scream bloody murder. After the traffic cleared and I kept driving, I found where the church was and pulled into their parking lot full of caravans filled to the brim with kids. Another CCD class was being held and I couldn’t find any section where there was a separate meeting going on. I walked around and around until finally I saw a man with his two children. I stopped him and asked, “Where is the lower chapel?” He gave me a look, smiled, and then said in a whisper-like voice, “Oh, they usually hold meetings in that church over there, however it looks too dark to walk over. Bring your car if you have to go there.”

I look, and again, it’s creepy and dismal. I was so sick of waltzing through ancient churches looking for help. PLEASE GOD HELP ME! Seriously. I’m gallivanting around God’s house, at least He can do is guide me, right? 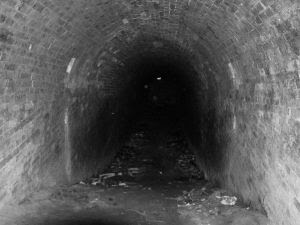 So get this: I walk up these ancient stone stairs in the pitch dark. It led me into a short creepy tunnel, however it seemed like I was walking in there forever. I get to the end of the tunnel and saw a light. (No I didn’t die out of frustration and this certainly wasn’t heaven.) Over at the lit up area, I met a cowboy. (This is definitely starting to sound like a weird dream.) He looks at me, tips his hat and says, “You hear for the Tupperware party,” and then winks, as though he’s saying, “AA is right here ma’am.”

I walked inside and was swarmed by dozens of women asking if I was new. Oddly enough, I had coffee after this entire anxiety-provoking experience. It wasn’t so bad after all. But I still have the scar to prove my efforts of getting there.