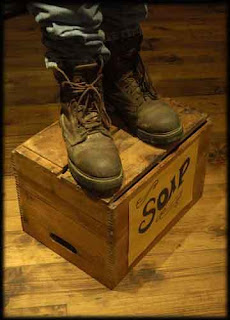 The morning started off bad. We ran out of coffee and had to use a blend from a gift bag we got a few months ago with an Elvis logo on it. The coffee was irritatingly strong and tasted like freshly brewed mierda. It’s the thought that counts, right? I headed back into the kitchen to pour no brand cereal into my bowl. Madelene insists on getting the “Cheerio-like” cereals in a ‘no brand name’, but hell if she’s touching my Special K. Anyway, while pouring the contents of this disgusting cereal, a huge blobby cereal grain covered something or other fell out into the bowl. Whatever was in the factory or scurrying around apparently fell right into the box. Lovely. Mind you, this was after the fact Madelene ate two bowls of it. That’ll teach her. I won’t be suing, although I really could use the extra cash.

I’m highly sensitive and grumpy today. I am avoiding every single person that knows me or may meet me in person accidentally. I am in full isolation mode. You may read my words but hell if you’re gonna get a real live person on the phone or even see me for that matter. I’m not even PMSing. Everyone, including my neighbors are irritating the hell outa’ me. Maybe I’m pregnant. Who knows? Stranger things have happened, like the pregnant “man”, right? Maybe I’m pre-menopausal? Eeek.

This should be a joyful time in my life with setting up for my upcoming wedding and looking forward to a beautiful life with my Madelene, but it somehow turned out to be a tension cord for other people.

Here are my gripes about an array of things that are irritating me. Bear with me because I’m in a pissy mood and need to vent.

*There are some who “assume” that because Madelene and I have been together for 15 years, (and have separated a coupla’ times during that period), that we no longer are intimate. First of all, it’s nobody’s business what we do behind closed doors. However, let me publicly announce that it’s never been so good as it is today. Pffft. Nuff’ said about that. I hate talking about my sex life because it’s absolutely distasteful.

*My mother won’t let me take her out for ishnips (a friend clam strip appetizer) and a few drinks because she feels that I cannot afford it since I now have a new condo and more bills to pay. No, I don’t have a million dollar mansion or ten luxury cars sitting in my garage that I don’t have, but I think I can afford $3.99 a plate for some damn ishnips. Now I can’t even have lunch with my own mother like I used to before I started living here. Instead, I left her house and bought 2 lbs of Chilean sea bass (which is $22 per lb) and expensive wine for Madelene and I to enjoy later that evening. And to think, we didn’t end up in the streets after that meal. I know my mother cares about my well-being and affordability, but it’s sad to think I can’t take her out to lunch anymore.

*This next gripe may sound childish and probably most likely is, but every single one of my sisters has received some type of “surprise party” or something set up just for them. From birthday parties, engagement parties to bridal showers, bachelorette parties and baby showers. I went to all of their showers, surprise parties, weddings and other parties which were fun, but none of them ever attended my parties. Waaa waaa waaaa, right? There were a couple of important parties I didn’t attend, only because I genuinely didn’t feel well. I got flak for not attending a couple of them from my mother. I personally don’t want a “surprise party” but it would be nice if my family would attend a function I’m having once in a while. Sometimes I think it’s because of the guest list---that they may not be able to relate to some of the LGBTabcdefghi groups. Whatever. Assumptions assumptions. It’s not like I ban the heterosexuals from my parties, in fact, sometimes they outweigh the gays and lesbians at my parties. (Not physically of course.) Or maybe it's because it's too small of a venue for them. Hrmm. The root cause of this issue I have is that I don't feel my life or my relationships are ever taken seriously by the people I love the most, which hurts.

*“Hey, we’re getting married!” Do you know I didn’t get one “congratulations” from my family? Only one sister congratulated me. It’s not that I want a pat on the back for getting married, but now that it’s finally legal and we’re having a nice ceremony in MA, it would be nice if my family took my relationship seriously as a heterosexual one. I'm not even expecting any of them to travel 6 friggin hours from NY to MA either. I realize that is just too much. I understand my parents not ‘getting it’ because they’re old school and not used to it, so I appreciate their total acceptance with my lifestyle- period. They’ve accepted me from the day I came out of that stuffy closet.

*I was warned not to have a baby in fears that I may ask my parents to baby sit or have one of my sisters watch them. First of all, I would never do that. I would hire a trusted baby sitter and pay them. Yes, I can afford a baby sitter. Then the discussion went on to say that I’ll be sick and that I would never be able to handle being pregnant. The least expected parents are usually the best ones. I was advised to take my nieces and nephews for a few nights, but in my own personal opinion, without the appropriate discipline that I feel they need, (with all due respect) I would have no control if they don’t listen to me because I have no right to discipline them since I am not their mother. A day visit or seeing them with their mother is good enough for me. I love them all, but refuse to watch them overnight in fear of an uncontrollable situation. With discipline, I mean verbal control and letting the children know that they can’t get away with b/s. I don’t believe in hitting a child.

So for now, for this year, I am without child because this is our first year in our new home and I want to be able to enjoy Madelene and share a romantic, fulfilling life with her on many levels. I refuse to let others dictate how my life should be and I’m sick and tired of some people trying to justify their life by comparing it with mine.