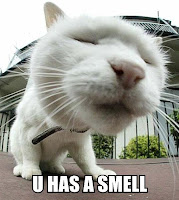 I stink. See, I bought this new cologne/perfume, sort of a unisex type of toilet that I “thought” smelled really good when I first was introduced to it. Somebody at a friend’s party was wearing it, so I asked what it was. Now, stupidly enough, they told me. I don’t ever tell anyone what I wear or the combos I mix, because then they’ll run out and get it themselves or protest against it…not sure which one. Anyway, like a copycat unoriginal moron, I went out and bought the love potion myself. I was excited to go home, spray myself a few times with this magic concoction and head out to dinner with my sweetie. Here’s one of my secrets: I always apply lotion on top of the perfume to lessen the blow, if it’s a pungent and strong solution..
Result: I smelled like one of those perfume samples in a magazine. I smelled like an old Vogue insert from 1982. This perfume isn’t one of those cheap drug store kinds either – it’s a well-known and expensive brand that I already smelled on somebody else...key words being: somebody else. I’m reminded of "body chemistry" and how different one perfume smells on another person. My body chemistry is fighting this battle and losing. At night, I have this long drawn-out process of washing my face, exfoliating, primping up, flossing and brushing my teeth and then throwing myself under a pile of covers. Well, last night when I tried to fall asleep, the smell was there to haunt me. The smell was in my hair, my chest, and my arms – it was everywhere. I got up and tried washing every area I could have possibly sprayed. 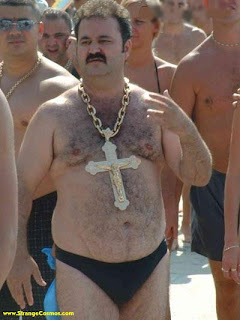 My nose finally became numb to it all and I fell asleep, only to wake up and rise and shine to the smell of bad perfume. This perfume – or cologne should I say, actually reminds me of an old boyfriend who used to shower in the stuff. (Different stuff mind you.) But, I was picturing him with his little fancy silk shirt buttoned down low with his curly chest hairs sticking out amongst his gold Italian figaro chains that held gigantic crucifixes, along with Italian horns to ward off any evil spirits. (Which is a sin in itself – Italian horns and crosses are like sacrilegious and all.) That’s neither here nor there.

Back in my disco single days, I bought this stuff that had natural human pheromones in it. (Sounds gross right? How the hell did they extract that stuff? Probably from dead people.) Anyway, I tried it to only come to the conclusion that it only attracts dogs. Small dogs mind you. I started dating this girl (you know who you are), and I went to go pick her up for a date. I figured that I’d wear the stuff to see if she gives me that twinkle in her eye… (Hopefully not twitching from my perfume.) So, I walk inside her apartment and her little dog comes charging at me and jumps on top of my shoulder, licking my neck and practically fornicating with me. (I wanted the owner of the dog to do this!) We couldn’t figure out why her dog was getting so “cozy” with me. The dog was usually skittish and high-strung, much like a Chihuahua, so this was quite a mystery…or was it? I wasn’t about to tell my girlfriend that I used some “love potion” that was possibly taken out of the coroner’s office, so I remained quiet and acted just as baffled as she did.

That was the end of buying human pheromones online.

Back to current times: I stink. I stink like a French male whore, never mind female. If you walk inside my apartment, you’ll think there’s a man hiding in the closet somewhere. All femininity has been lost all because I wanted to try a new scent. Unfortunately, science tells us that women are generally attracted to scents of a masculine nature – regardless if their preference leans towards women. So, I want to stick to the science theory and lure my girl in with some alluring aroma…