Can Our Deceased Loved Ones Visit Our Dreams? 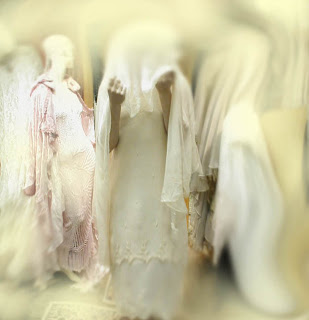 Leesa’s done it. She took the “crud” out of my system. The “crud” being referred to as writer’s block or just 'I don’t wanna write' type of phase where all I post are someone else’s words or just plop a video onto a post. Voila – a post! So now I am going to ride the coattails of my friend Leesa, who is an amazing writer, thinker, soul-searching, thought provoking and beautiful person. (Can I get any more adjectives in there?) Okay, she’s sexy too!

On her post entitled, “’Til Death Do Us Part (Maybe)”, she explained her thoughts regarding her deceased grandmother visiting her dreams. She tossed around the idea that maybe it was her neurotransmitters in her brain that conflicted with the actual – wait – “possible” notion that it could very well be her grandma’s spirit coming for a visit. Toggling the theory of science vs. religion and spiritual encounters, Leesa triggered some memories I’ve had of my grandmother “visiting” me in my dreams right before her death. I told my mom that I was going to Brooklyn to see grandma before she died. I had it all planned out for the following Saturday. My mom warned me not to go, because she thought I would get disturbed over the sight of how my grandmother looked like now, as opposed to when I remembered her before having the stroke and literally becoming a vegetable in bed for months. The beautiful, robust redhead was now down to bones and white hair. Was I prepared to see her like that?

I didn’t care. I still planned on visiting grandma. I wanted to say my last goodbyes. It was important to me. A few nights before, I went to sleep and dreamt that my grandmother was talking to me, telling me not to go, because she didn’t want me to see her like that. Mind you, during this dream she was still alive, yet not conscious. My hard-hardheadedness told her no and that I was still planning on seeing her. Two days later, my mother came into my bedroom and told me grandma had passed away. Her “hard-hardheadedness” beat my own stubborn ways. We were very much a like in many areas. In fact, at her funeral, I found out that her birthday was the same as mine – February 4th. She always celebrated it on February 5th. No one ever explained why she said her birthday was on the 5th instead of the 4th. (If any family member is reading this, please explain to me…) Was it because she wanted me to have “my day”, or was it because she just messed up? I always said to her, “Grandma, I wish our birthdays were the same!” On the day of her funeral, they made her up to be what I remembered her to be: the beautiful robust redhead…the woman she wanted me to see.

I can’t say for sure if it was actually my grandmother visiting me in my dreams, however, it’s a comforting thought and belief that makes me believe that grandma was protecting me from a traumatic encounter.

Thanks, Grandma! And thanks Leesa for making me 'think' again!
So what do you think? Do you feel that it is in fact, the neurotransmitters in our brain that make us conjure up these dreams of our deceased loved ones? Or do you think it's really true that they are trying to communicate with us through our dreams?
death dreams ghosts visiting our dreams religion spirituality