A Korean, a Behemoth and an Italian Girl at the Checkout Counter... People are such inconsiderate, irritable, self-absorbed moronic idiots lately, I swear. It’s like, you try to give most people the benefit of the doubt and they seem to just vomit ugliness everywhere. And no, I’m no angel to begin with…and therein lies my dilemma...
Picture it. New York, 2008. Tuesday, late afternoon standing in line at a local Korean market buying fresh salmon for dinner…say 4ish or so… I had just gotten back from the big supermarket buying staple groceries, fighting the mass crowds of people who were pushing, shoving and wrestling one another for the very last can of habichuelas, because there was a snowstorm brewing outside. God forbid we go without a smoked ham and apple crumb cake for a day or so. A little woman standing outside of the supermarket while it was snowing asked if I could give her a ride down the road, however, her cart was full of groceries and my bus of an SUV had tons of wood piled up in it, plus the bulk of groceries I had going on myself…and of course, the thought, “She’s can be a serial killer! Hell no!” (Which is the reason why most New Yorkers don’t stop when they see someone sick on the street or someone hurt – they think it’s some kind of scam. We’ve been traumatized to all you Midwesterners who are reading this.) Highly unlikely, however there are cabs everywhere. I’m sure she was okay. I’m sure. I hope. 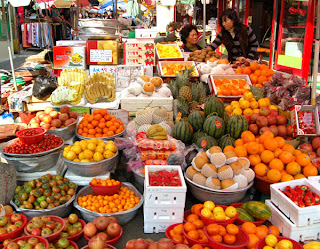 Anyway, back to standing in line at the Korean market… There were two women standing in front of me. One was checking out her produce. She was a large, say 6 foot tall and big all around, and the other woman behind her was about 4’11, skinny and fragile looking. I see this behemoth-looking woman fumbling in her purse for her wallet. She pulls out an American Express card.

“Ah, no, we don’t accept that here.”
“Well you used to!” the behemoth blurts out. Now mind you I’ve been coming to this market since it opened and they never once took American Express. They’ve had the same machine there for years.
“So you don’t take American Express anymore?”
The cute little Korean guy looks down, frustrated that his words weren’t understood, possibly taking too long, when the woman starts growing angrier.
“Huuuuuuuuullllllllllooooooooooooooo?” she says, as though he was some idiot.

Deb’s temper rises. I was fuming over the way she made this cute little man feel like a pile of shit.

“I’m not sure if you heard him or not, but he doesn’t take American Express, never has, and not once since this place opened have they taken a card that is hardly accepted anywhere.” I said…hoping I wouldn’t be eaten.
“Well they should have a damn sign that says that!”

“Maybe if you opened your eyes ma'am, you’ll see the bright yellow sign that tells you what they do accept. They also don’t accept Monopoly money, however, they didn’t list that as things they ‘don’t’ accept.” I replied.

I’m still waiting for this woman to take a bite of my left shoulder at this point. She throws some fresh cash on the counter that looks like it’s just been spit out of an ATM machine and grumbles a few obscenities at the Korean guy and me and then waddles out of the store furiously.

When my turn came, I plopped my 2lbs of salmon on the counter and said, “Tough crowd tonight, huh?”

He just looked at me in fear.

Now, I never, ever get myself involved with outside arguments or things that have nothing to do with me, but this woman was so mean to this guy and so stupid that it made my blood boil. It was then, when I walked out of the store to see her piling into a minivan full of bratty screaming kids and saw the parking sticker for a hospital that she works for. Can you imagine the day she had?