Can Cell Phones Disturb Your Sleep?

See how resourceful I am? I’m even recycling news! I’ve always wondered why I wake up every single hour during the night. It’s seldom that I get a full night’s rest. At first, I thought it was a bladder problem, then I thought it was just stress or whatever was brewing in my life, and then I even came to the conclusion that I had sleep apnea. I even stopped eating past a certain time just to see if that would help. ...Nada. I still woke up “thinking” I had to use the bathroom. I did, however, if I were in a deep slumber, I’d wake up in the morning after a full night of sleep and run like hell to the loo instead. There has to be another issue. 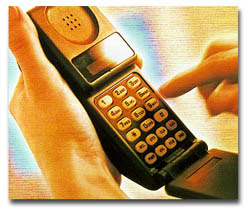 Last night, I pulled the covers over myself and turned on the news so I could see the forecast for the next day. This is a normal ritual for me and then I turn the TV off and try to sleep. The newscaster said, “Are you having trouble sleeping at night and not getting a full night’s rest? Cell phones may be to blame!” I perked up and looked over at my cell phone, sitting on my night stand ready to take any incoming calls from anyone that would annoy me that late.
"Mobile phones severely disrupt sleep patterns, according to scientific research into their impact on human rest, funded by the Mobile Manufacturers Association.

The research undertaken by the Electromagnetic Academy based at the MIT, in the United States, exposed 71 men and women, aged between 18 and 45, to mobile phone radiation as they prepared to sleep.

According to the study, monitoring under laboratory conditions showed the initial ‘light’ phases of sleep in the subjects were affected. In addition, “exposure to 884 MHz wireless signals, components of sleep, believed to be important for recovery from daily wear and tear, are adversely affected."

The research also found that those exposed to mobile phones during their sleep appear to have more headaches, than those not exposed.
A more detailed article dated January 20th by The Independent sheds further light on the study.

‘... The findings are especially alarming for children and teenagers, most of whom – surveys suggest – use their phones late at night and who especially need sleep. Their failure to get enough can lead to mood and personality changes, ADHD-like symptoms, depression, lack of concentration and poor academic performance.’"
From: Textually.org
I had the best sleep last night, after turning my cell phone off for the entire evening. Was it all in my head, or is there really some truth in this?
While talking to Madelene the other day, who recently got a partial hysterectomy due to large fibroids, said that the side which had numerous fibroids, was exactly where she carried her cell phone. I found that to be interesting. Ever since her job required her to wear a phone on her hip at all times, she developed huge problems that grew inside her: large tumors that were so big, they were nearly starting to apply pressure on her organs. A normal uterus weighs approximately 6 ounces, where Madelene’s weighed 10 pounds. The normal size of the female uterus is 6-8 centimeters. Madelene’s size was 20 centimeters and still growing. The doctor told her that it was equivalent to a 6 month stage of pregnancy.

What about wireless internet? Almost every one of us has it. If we don’t have it, our neighbor’s network is seeping into our homes, leaving us to vulnerable air waves that can be potentially dangerous. I’m sure sometime soon, the news will blare out a message that wireless internet is the lead cause of cancer. Watch.
Am I overreacting?
cancer cell phones cell phones disturbing sleep fibroids insomnia uterus wifeless internet WiFi