What? You're Offended, Nelson Garcia? 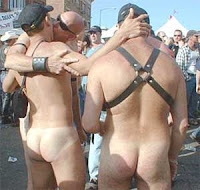 There are tons of hidden people out there online, surfing, lurking, participating in conversations, as well as pretending to be people they’re not. There are others who love to ruin someone’s reputation, only due to different beliefs and opinions. Blogs are blogs. They’re not a good resource as far as looking up important information about a person. I’ve come across many blogs that exploited innocent people, giving harsh opinions and judgments about them. It’s their right to speak their mind, but when does it come to the point of lying straight out about them?

Yesterday was my second year of blogging. Within that time, I’ve met some really awesome people, whether they were writers or people who stopped by to read what I had to say. I was honored. I started this blog because I was writing a book at the time. I’m a new writer- not a big top seller on the Barnes and Noble’s shelves, (I wish) however, it took a lot of energy, time and healing to write A Prayer Away From Healing. I was going through a rough break up and found solace by praying to God about my problems and writing down how God helped me through it all.

I don’t claim to be “accomplished”, as some people keep describing me as. I’m just a person who loves to put her thoughts, ideas and beliefs in a book or in a blog. I had several people who have read me insist that I went under different aliases, that I wasn’t really “gay”, and how my very own opinions were offensive. One person, who goes under the name of Kevin, was offended by one of my comments over at another blog. I explained that I didn’t particularly care for the word “pride” when speaking about my lifestyle. I also went on about how I thought the gay pride parades weren’t for me. I didn’t like some of the marchers who walked around half naked, holding explicit picket signs and having sexual encounters right in front of children and other people. How does this look for the gays and lesbians who are trying to tell society that we’re not freaks?

As the debate got heated, I made an apology over to Kevin, stating that my opinions may have been harsh, and that I was sorry if I had offended him. Another blogger that goes under the name “NG”, Nelson Garcia, had written me a very nasty email stating that I gave Kevin a “half ass apology”, because my apology was coincided with an embarrassing event that took place in my life days after. The whole story revolved around my sense of pride, and how I was reacting to everything lately in a negative way. I was being honest and opening up to my readers. Kevin graciously accepted my apology and we resolved everything civily. Nelson Garcia was still infuriated by it all.

Nelson continued to harass me, and then resorted to lying about me on the internet. He stated on his blog that I was going under a different alias- who happens to be "Loud Mouth". He usually sides with me, and no- he is not my alter ego. He is a real person who I know personally. Nelson kept emailing me with insults and threats that he was going to reveal how my book was selling. Okay… Fine. Knock yourself out, but why would you put all that negative energy into a person you don’t even know? He stated that he was going to display my ranking number each time a New York ip or surrounding area would appear on his blog. (His assumption of my area included cities that were nearly 5 hours apart from one another...great tracking system!) Please---state my ranking numbers so people will buy my book! I was hysterical over his obsession with me- then I saw what this guy is all about. He’s an angry little gay man who doesn’t talk about anything other than exploiting people and politicians who have been caught in sexual acts or some other controversial matter. He’s a busybody- a wash woman if you will. He thrives on gossip, particularly the Republican Party. He looks to defame and embarrass, when in fact, the embarrassing part about this all is his very own blog.

Nelson Garcia has an ad out on his blog that says, “Hot Gay Hook Ups For Men”, while he blasts politicians and bloggers about having opinions of their own. It was part of a google ad. In his profile description, it reads:

“The views and or opinions are mine and mine alone and do not necessarily represent the views of the online gay and lesbian community. So there.”

So there? Is Nelson the only one allowed to have an opinion or thought? It baffles me that there are so many closed-minded homosexuals out there, when in fact, they are craving for acceptance from others. How can he gain acceptance by bashing every single person who has made a humanly mistake, or has done things differently than him? Or...has he done the same and is just reflecting upon his own nature? He’s a the ultimate hypocrite who doesn’t understand the meaning of tolerance…yet this is what “his community” stands for? This is what they fight for? Don’t you have to give back in order to receive? Maybe not in Nelson’s world, but the desire to tear people down is a sign of unhappiness within himself.

I’m starting not to like the phrase “gay community”, only because we have so many unique individuals that I wouldn’t want to be associated with. Am I being discriminating? I don’t believe so, but when a strong-minded gay person starts bashing everyone and their mother out of pure anger and resentment, you have to take a step back and think, what are his/her motives?

The ironic part about this all, is that there are sites that Nelson is affiliated with, which distribute and emphasize on gay sex. It’s purely promiscuous and actually, down right smut. So, when I read his new post about some politician going down due to sexual exploitation, I have to wonder how this makes Nelson feel, since he’s living in a perverse world of his own.

Take a peek at Nelson Garcia’s blog and notice the anger he stirs up…within himself. Pray for him, that his anger subsides and that he becomes more tolerant to those who are like himself. It's kind of sad.

It’s a shame that my view on the “gay community” has dwindled because of people like Nelson Garcia. I really don’t feel that my opinion about the gay pride parades is offensive, since some of the marchers are offensive to me. How can I ever think to bring my nieces or nephews to one of these, if there is way too much sexual activity going on? You just can’t anymore. It only takes a few to ruin a good thing.
defamation gay pride parades gay sex homosexuality hypocrites NG blog republican party sex slander