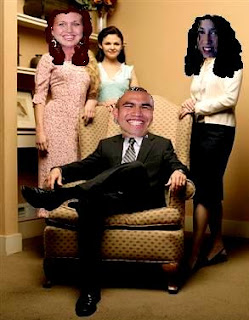 Yes, you read that right. I’m making the big move. I’m off to Denver to go live with Dani, Curtis and Maxime. Or wait- did I put that in the wrong order? I’m sorry. Curtis, Dani and Maxime. We have to make sure that the men are first and the women are last.

I’m excited though. They’ve opened their home to me. You can hear their invitation here. They’re providing me with my own bedroom within their home. My sister wives are setting me up with a ‘surprise husband’… Curtis. We are all going to be one happy family. See, when Maxime moved over to Denver to move in with Curtis and Dani, they were planning a “surprise husband”. Well, Curtis is one lucky man. He not only has two wives, he has three now. I plan to marry him a week after my stay, so we can fornicate as soon as possible. I hope my sister wives show me the ropes. Polygamy at its finest. I’m no longer a lesbian anymore. I’m a radical Christian fundamentalist that will be attending the Denver Bible Church.

So many events have been planned! Our first outing will be at a gay pride fest. We’re going to picket and warn these lost souls that they’re all headed straight to hell! We’ll march around their festival and scream on the top of our lungs, “God made Adam and Eve, not Adam and Steve!” We’re clever like that. We’ll then take a ride down to the nearest military funeral to see if a gay soldier lost his life in the war. We’ll protest around the mourners with antigay pickets that read, “Gay soldiers go to hell!” We’ll smile and laugh, as we tell their loved ones where they are headed. It’s for the best you know.

After a long day of warning these sick perverts who hate God, we’ll head over to the Denver Bible Church and pray for them. We’ll pray for these heathens, who’ve taken pleasure in wicked activities and who’ve influenced others around them. We’ll pray that God will throw a bomb on them, leaving nothing but a birdcage of ashes. We’ll sashay over to the alter and sing Christian songs, like, “Another One Bites the Dust”, to show the seriousness of this, and “I’m Coming Out”, to show how we’re straight and proud!

We’ll head over to the club afterwards and dance the night away in rainbow colored strobe lights. Drinks will include pretty colored martinis and a margarita for Dani- as she prefers them.

We’ll come home to our sanctuary, where no one can see behind our closed doors. We’ll let Curtis do the interior decorating for my new room, and I’ll let Dani borrow my Birkenstocks for her next outing. Maxime will be quick to borrow my Indigo Girls, and KD Lang CDs. We’re all going to have a great time learning about one another as sister wives.