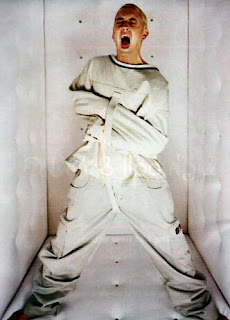 What is anger? It’s a negative emotion stemming from something. That “something” may not have anything to do with the subject that the anger spilled upon. The blogger who goes by the initials, “NG”, Nelson Garcia, is angry. He’s infuriated…but by what? He was angry well before he got upset with me for my opinions. I’ve looked into the archives of his blog and sifted through posts about attorneys, losing cases, exploiting politicians caught in sexual acts, as well as bashing other bloggers for having strong opinions…like he does.

He stated, “And she has the unmitigated gall to tell me I need God in my life. If anything, honey, you are exactly why I don't need God in my life.If ever there was a more exemplary case of why it is I'm disdainful towards the christian gay community, this be it.Dare I say (or write) again.. I won't be at all surprised to read one day that Debra Pasquella has gone ex-gay. In fact, the sooner she does, the better the gay community as a whole will be off.” 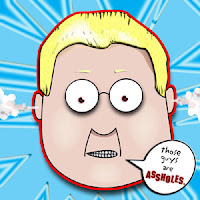 My opinion? He does need God in his life. When I come across those who don’t have a particular belief system, faith, or believe in the trinity, they become angry, because there’s nothing to live for other than their own mortal lives. There are no set morals, because to them, they turn to dust after they live on this earth, with no spirit to follow afterwards. Maybe that's it--no spirit? They’re angry because other people are happy. He’s not happy with himself. Just scrolling through his bitter blog I am reminded of that lost boy in school who felt isolated from everyone. He was gay and probably mocked for it. What he should have done was turn it around in a positive way, instead of becoming this middle-aged bitter person. In some cases, you get the results that left many devastated, such as those school shooting tragedies. Isolation, bitterness along with the desire to hurt, destroy or ruin somebody are all ingredients for a madman. I seriously believe that.

Good people enjoy the positive results of their words, but those who are treacherous crave violence. Those who control their tongue will have a long life; a quick retort can ruin everything. ~Proverbs 132-3

He feels it would be better if I weren’t in the “gay community”. As far as Nelson is concerned, I’m not in the “gay community”. I’m among them, and around other people who are heterosexual as well. I don’t discriminate against straight people, as he apparently does. Most people that are in my life are heterosexuals. Due to the high amount of discrimination that the gays and lesbians have, it left a bad taste in my mouth. Don't get me wrong, I have many homosexual friends, but most are heterosexuals. I don't choose their friendships due to their sexual orientations.

I also want to point out that I do love my fellow Christians—even those who are opposed to my views. He asked why I even deal with people like Christine, Mark and Dani. We debate, and sometimes it does get hairy, I will admit, however, I admire each and every one of them for their strong faith in God. We can relate on many levels…except for the fact that my beliefs lean towards the concept that homosexuality isn’t a sin. I’ve witnessed more anger through NG’s blog, more so than any one of the mentioned Christians above. (Dani can be a bit harsh, but she sincerely invited me to live in her home to convert me, which I thought was a nice attempt.) Her beliefs are WAY strong, yet they’re her “truths”, so she feels that she’s doing a good thing. Again, I admire it. We’ve come to a civil point in our debates where we know where we both stand.

Nelson Garcia won’t let anything go. He’s stewing over every single thing that comes his way.

“That said, the claim that I'm promoting a book is fraudulent. No, I didn't e-mail Debra; In

fact, once it was made clear from other bloggers that someone associated with Debra was playing games at my expense via other blogs, I decided to play a game too which apparently worked since no sooner did I announce it, Debra, who said, and you can read for yourself that she was blocking my e-mail wrote me back denying it all.” 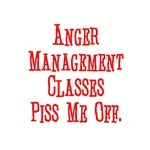 Lie after like after lie with this guy. The NG blog is full of lies and deception. First of all, I have never, ever claimed that he was promoting a book. Him? And the only reason why we have begun this little war is because of his nasty emails to me. There is nobody that I know of who is associated with me who “played games” on other people’s blogs. I could swear on a bible...but I don't believe he could. Why should he? He doesn't even have God in his life. It makes it that much easier.

I did block Nelson’s emails, because he was harassing me. I told him he could stop reading my blog if he was so offended. That’s his right and its that simple. He kept on sending me nasty little tidbits of his anger and then I blocked him. Anyone would have blocked this maniac.

Those who are godly hate lies the wicked come to shame and disgrace. ~Proverbs 13:5

Nelson, with all due respect, stay on your blog and I’ll stay on mine. I think this debate is unproductive and pointless. You’ve failed to present your side in a tactful or respectful way. You’re against everything that anyone stands for. You’ve lied profusely, and it’s quite embarrassing to see you go through this.

I have the right to do the same. I just choose to do it in a much different way…and that’s what makes us unique. The weaknesses that the humankind struggles with are your own. Maybe you should consider relating to people, rather than judging them. Hasn’t the “gay community” suffered enough? Yet you're so busy trying to get everybody to accept you...I just don't get it.
My advice? Find God or find yourself a good martini bar. The first one's on me!