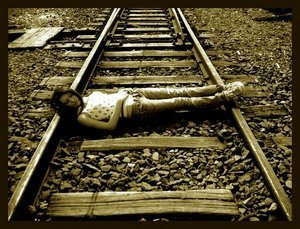 Has it reached a full two years since Dani and I have been debating over whether or not I am able to actually be a “Christian lesbian”? Regardless, we always seem to go over this topic. Sometimes, it’s dramatic and heated up. Other times, it can be a civil conversation between two adults who love God. The only difference is, Dani fully believes I don’t love God enough, because I refuse to transform into a heterosexual. Her belief, as many of you know, is that God intended to only join a man and woman for procreation.
I can totally respect that, due to the bible not being so black and white. The gray areas of the good book have been questioned upon, debated over, and also killed for. Over at Dani’s site on her latest attempt, she dedicated another post to me. It had ten steps to come out of the lesbian lifestyle. Dani and I are trying to discuss this with open minds and open hearts. Now, the only thing that makes me cringe with this discussion is that she compares my relationship to those who are pedophiles, wife beaters, child molesters and rapists. I have to tell you that it hurts me to think that people would consider me to be equivalent to these types of horrific beings. Those types of people hurt others.

Many Christians think I should leave the lifestyle and become an ex-lesbian. I can’t imagine being an “ex-lesbian”, however, let’s just say I did become one. Let’s take a look at what I’d be like, or assume what I’d be like.

(Warning- this may be graphic and some men may get offended. Please note, that I do not hate men. I love men, but not in an intimate way. I think men are great, but a relationship or marriage with a man is not in my cards. Just as a straight man trying to be gay- it’s not meant for him.)

1. I’d go through the motions of being with a man. I’d probably try to find a man who had a great sense of humor, someone who could make me think, and someone who’s also a Christian, or believes in God. That’s very important to me in any relationship. I need to relate on a spiritual level. (Mind you, I have male friends who fit the bill on this one!)

2. What man is going to wait for sex until marriage? So right there, it’s going to take me a long, long time to find a man who’s willing to say, “I’ll wait a couple of years and be celibate for you.” I know “love” becomes a factor and if he really loves me, he’ll wait, right? Love isn’t about sex. Sex is just a bonus, I know, but reality hits you and it’s evident that there are hardly any men out there that will wait. {Note to Dani: You didn’t wait until marriage. This you have revealed to me---however, since you repented of premarital sex, you’re okay now, right? So, right there, you’re lucky. (In the belief system that you hold to be true.) Some people aren’t so lucky I guess.}

3. I’m still on the sex topic, so bear with me, okay? I am not attracted to men in that way. I think that there are gorgeous men out there, however, I don’t look at them and say, “Whoaaaa,” and totally drop my jaw in lust. I can appreciate the beauty of a man, all sizes and all races. On our wedding night, while preparing to get deflowered, would I have to close my eyes and pray to the good Lord to get this over with?

It’s not fair to the man if I did this. He would have a wife that didn’t have passion for him, who wasn’t fully attracted to him and that would eventually lead him with negative thoughts about himself. His self-esteem would diminish, leaving him with thoughts of unworthiness. I would never do this to a man. When I was single, I even tried with men. It’s very difficult for me to go there. And, when I have, the men that I have been with were ones I potentially saw myself with. I never did it for just kicks. The men in my life are important to me, so much, that I don’t become their wife. For that, they’re fortunate!

What goes through a woman’s mind while she’s brought up in a Christian household, gets married, has kids, and then years later, admits that she’s now a lesbian? Some Christians will say that the devil got into her, that it’s a message from the “evil one”. Other people will simply feel bad that she suffered many years holding this type of feeling inside.

“Fight it! It’s the demon of homosexuality!”

I wrote a comment to Dani on her latest post. I asked her, since I’m unwilling to break up with my loving partner, because of my strong belief that God accepts me, should I sacrifice myself to my God? If it’s already determined that I’m going to hell for continuing my lifestyle as a lesbian who loves her partner, should I say, “I’m sorry God, I repent of being a homosexual,” and then sacrifice myself to God, for the sake of dying without sins? Nowhere in the bible does it say that committing suicide is a sin. Murdering is a sin, but what about sacrificing yourself to God? Isn’t that was Jesus did? Aren’t we supposed to follow what Jesus did? We’re supposed to be “Christ-like”, right? WWJD? (What would Jesus do?)

Stop panicking. I’m not going anywhere folks. I’m making a point though. I proclaim with all my heart that I am a Christian strong in her faith! I am not going to be a closet Christian. I refuse. My love for Jesus is way too strong, and His messages to me, that He loves me as His child, and loves all of his children, regardless of their lifestyles makes me want to spread the word more. It makes me want to spread the word of love more. I firmly believe this is my mission in life- this is my purpose.

For example, this is Dani’s interpretation of the bible in Romans:
“Just as Romans 1:24-26 says, 'Therefore God gave them over in the sinful desires of their hearts to sexual impurity for the degrading of their bodies with one another. They exchanged the truth of God for a lie...Because of this, God gave them over to shameful lusts. Even their women exchanged natural relations for unnatural ones.'This verse speaks nothing of promiscuity, but rather God giving people over to their sinful desires to do the things which are unnatural since they believed a LIE in their hearts, instead of the Truth of God's Word.”

Does this passage sound like sex to you? Does it sound as though it speaks about promiscuous matters, or a loving relationship between two people of the same gender?

In my belief, this passage is purely about sex. Promiscuity seems to be confused with love, as I take it from Dani’s view. My relationship with my girlfriend is not all about sex. I have a best friend to confide in, I have a loving woman who supports me in whatever it is that I do, and I love someone who’s apart of my family. Our communication is open, loving and sometimes we debate on issues like any other normal relationship- and sometimes we communicate through love…through intimacy.

Is lust the same thing as love?

I have been compared to these types of people, which hurts. I’m human, so when someone tells me that I’m just the same as these other people who intentionally hurt others, it affects me in a negative way. It tears down my spirit and makes me believe that it’s impossible to have faith in people.

Almost two years now Dani. It’s time to shut the door on this one. If God calls me to be an ex-lesbian, than that’s what I’ll do. He hasn’t told me that- ever. The words in the bible are seen in many various interpretations, translations and conclusions.

My question to you is, how do you know 100%, absolutely without a doubt, that what you’re hearing is the message of God? Put aside the bible, because we both interpret it differently. I believe that your message is negative, not because I want to fulfill my “evil desires”, because I don't feel it's evil.

How do you know that your belief is “truth”? What spiritual experiences have you had to hold this up?

Did you hear a voice from God?

Your interpretation of that passage in Romans clearly states “lust”. Lust = promiscuity. It’s not love.