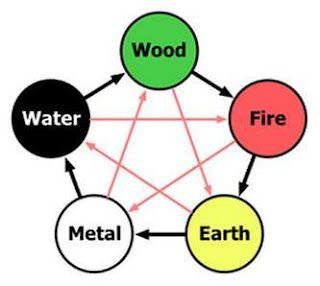 Guilt, shame, low self-esteem, frustration and hopelessness are all negative gifts from the devil. Remember, the devil wants you to think and feel these emotions. They’re not of God. Christians who are weak in faith and insecure about their fate will judge and ridicule you about how you live- regardless of what ‘sin’ you’re committing in their eyes. God has taken away the sins of the world with the death of His son. Nevertheless, evilness still roams around aimlessly, hoping to trap us into its web. There’s a big difference between evil motives and a ‘human heart’ for God. We all sin. Just being inside our physical bodies is seen as sinful. The earth is sinful

Think about this… The five elements, which consists of earth, metal, fire, water and wood are all “of this earth”. Each material is crucial to our living here on earth. They are “of the earth”. The pentagon- the five-pointed star is now looked upon as sacred to new age religions, due to ‘loving the earth’. In my belief, we are not to worship the earth, for it’s only a stepping stone into our new home in the afterlife. The earth is to be respected and taken care of, but not to be worshipped. It scares me that many people have adopted the five-pointed star, in order to show their love for the earth. In my belief and opinion, the five-pointed star resembles Satan. It resembles his ownership to this world. There is much more evil on earth than there is good. Don’t be deceived by the pentagon.

One day, I walked into this little antique and art shop in upstate New York. There was a sign on the door that read, “The pentagram is often misunderstood as the symbol of the devil. The pentagram is a symbol of the five elements, which are earth, metal, fire, water and wood. This is all of the earth, it is all of nature which we belong to. We should never fear the pentagram, instead, embrace it.”

The devil will do anything in his power to get you to believe that ‘nature is all good’, and that we should basically worship it, instead of God. Or – some people will say, believe in the “gods”, which also sounds wishy-washy to me. I don’t want to sound like I’m bashing other religions or beliefs, but as I see it-- it’s a way to lure in young kids with the mindset of idolization. They focus less on God, and more on what God created. This earth will wash away soon enough, then what’s the main focus? Our primary focus should be the Kingdom of Heaven – the main goal of our afterlife.

There are many other ways the devil tries to lure us in, even giving us one of our own to deceive us. If you’ve been reading my blog for quite some time, you’ll know that there are many people who come on here trying to throw guilt, shame and judgment upon me. If I was a weak person in faith, I would have taken on these negative emotions, and possibly draw further from God- thinking that He was a hateful and mean Creator. God does punish those who have evil hearts and evil desires—this I believe. However, God loves all of us who love Him. We also must be respectful to those around us. Does this mean we have to like every single person that comes our way? No. But, if we try our hardest to act humane to everyone, God sees our hearts.

Don’t you think that God wants you to enjoy life, without the feelings of guilt and self-loathing? I remember a good friend of mine who went through a dilemma regarding her lifestyle and how she viewed God. All her life, she knew she was a lesbian. She dated a girl for a few years and then came to the conclusion that being homosexual was absolutely wrong and an abomination in God’s eyes. I was okay with how she thought, because I didn’t judge her. If she thought this was ‘right for her’, who am I to say anything? The ironic part was, she condemned me for being with my partner of many years. She said that I was going to hell and how sinful it was to sleep in the same bed as my partner. The church she went to promised her a life of happiness and joy, if she would leave her current lifestyle as a lesbian. She had a wonderful girlfriend who she truly loved. The conflict between God and having a life partner lingered for a long time in her mind. Did she have to give up one or the other? In my opinion- no. She could have both, just like a man and woman.

She went through years of suffering. Even though she was professing heterosexuality and living what she called, “a normal life”, she went through a bad depression. She got married to a man in her church that had the same mindset. He was controlling and condemned anyone for doing humanly things. He was also a hypocrite, because he had a problem with drugs and alcohol as well as being unfaithful to her. He never mentioned that to anyone. My friend would tell me what he went through, and how awful she felt, because deep inside, she wasn’t happy. She said she was living a tortured life. Years later, she realized that the torture came from within the church and through the judgmental criticism of her husband. He was looked up to in the church and had a good reputation…except inside his own home. She was a battered housewife. No one ever suspected. It was a blessing they didn't have children.

My friend found a new church that accepted her as a ‘human’ and didn’t shower her with guilt and shame for who she was. They were non-judgmental, and treated everyone with love and respect. Sounds kind of familiar, since Jesus did the same when He was here on earth. If you feel negative emotions when you’re speaking about God, or hearing words from another person that’s negative and makes you feel all sorts of emotions that are completely depressing, remember, God doesn’t send messages that tear down. He sends us messages that edify and lift our spirits up. He gives us hope, joy and love. And yes, God does get angry. He gets angry with those who spread the seeds of hatred and guilt. He gets angry over the evil motives of other people.

True, there are a lot of misunderstandings in the bible; tons of contradictions. If you ask God for understanding, He’ll give you the gift to grasp the bible’s meaning, instead of just reading it. Some people will continually throw scriptures at you, but there’s always a counteracting scripture that can be thrown at them. But, my question is, why do Christians have to battle over God, when God is all about love? The scriptures are meant for us to learn, not to belittle, discourage or condemn.

We’ll never live in peace. We’ll never agree to disagree, because we’re strong in what we hold true in our hearts. The one thing we can try to do, is see things for what they are. If you’re ‘right with God’, then be happy about it. Don’t condemn others who live differently than you do. Live among them, you share the ‘earth’ with them for a very short time. Why battle? Life’s too short.
battered wife Chrstianity five elements God hypocrisy new age pentagram