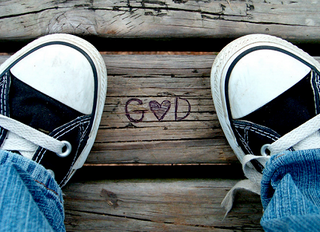 “Then the Lord answered Job from the whirlwind; 'Who is this that questions my wisdom with such ignorant words? Brace yourself, because I have some questions for you, and you must answer them.Where were you when I laid the foundations of the earth? Tell me, if you know so much. Do you know how its dimensions were determined and who did the surveying? What supports its foundations, and who laid its cornerstone and the morning stars sang together and all the angels shouted for joy? Who defined the boundaries of the sea as it burst from the womb, and as I clothed it with clouds and thick darkness? For I locked it behind barred gates, limiting its shores. I said, ‘Thus far and no farther will you come. Here your proud waves must stop!’Have you ever commanded the morning to appear and caused the dawn to rise in the east? Have you ever told the daylight to spread to the ends of the earth, to bring and end to the night’s wickedness? For the features of the earth take shape as the light approaches, and the dawn is robed in red. The light disturbs the haunts of the wicked and it stops the arm that is raised in violence.Have you explored the springs from which the seas come? Have you walked about and explored their depths? Do you know where the gates of death are located? Have you seen the gates of utter gloom? Do you realize the extent of the earth? Tell me about it if you know! Where does the light come from, and where does the darkness go? Can you take it to its home? Do you know how to get there? But of course you know all this! For you were born before it was all created, and you are so very experienced!Have you visited the treasuries of the snow? Have you seen where the hail is made and stored? I have reserved it for the time of trouble, for the day of battle and war. Where is the path to the origin of light? Where is the home of the east wind?Who created a channel for the torrents of rain? Who laid out the path for thelightning? Who makes the rain fall on barren land, in a desert where no one lives? Who sends the rain that satisfies the parched ground and makes the tender grass spring up?Does the rain have a father? Where does dew come from? Who is the mother of the ice? Who gives birth to the frost from the heavens? For the water turns to ice as hard as rock, and the surface of water freezes.Can you hold back the movements of the stars? Are you able to restrain the Pleiades or Orion? Can you ensure the proper sequence of the seasons or guide theconstellation of the Bear with her cubs across the heavens? Do you know the laws of the universe and how God rules the earth?Can you shout to the clouds and make it rain? Can you make lightning appear and cause it to strike as you direct it? Who gives intuition and instinct? Who is wise enough to count all the clouds? Who can tilt the water jars of heaven, turning the dry dust to clumps of mud? Can you stalk prey for a lioness and satisfy the young lions’ appetites as they lie in their dens or crouch in the thicket? Who provides food for the ravens when their young cry out to God as they wander about in hunger?'”

A friend stops by regularly to bring over delicious apple pies. She does this almost every other week out of the goodness of her heart. She’s generous by nature, and doesn’t expect anything back in return. I take the pie. I thank her, yet focus and rely on her bi-weekly apple pies. Never, do I call her to come over for some coffee and talk. We see each other on the street, say our ‘hellos’ and then move on. Her pies still keep coming like clockwork. Instead of relying on her “pies”, I should be appreciating the “creator” of the pies- my neighbor, right?

Who made the earth? God. In my belief, God is the Creator of all things. My primary focus is not earth, metal, wood, fire and water. It’s God. God, who has made all things beautiful for us to enjoy. God, who has made each and every one of us, who still bicker over who’s right and who’s wrong.

A brother and sister fight over who’s the better sibling. The brother says, “Well, I take out the garbage every single night, while you sit there and do nothing.” The girl responds, “Nothing? Nothing? I clean up after you and wash the dishes at night, while you sit there doing nothing!” For hours, the sister and brother continuing arguing over who’s the ‘better child’. “At least I don’t sneak out in the middle of the night like you do, to meet your boyfriend,” the brother says all proud, “mom and dad would totally punish you for that!” The girl looks at her brother and says, “You have some nerve! I’m not the one who sits at his computer and watches dirty websites you perv!” They both remain silent looking at one another, realizing that they both have different faults of their own.

Which child do you think the parents love the most?

We try the best we could to be the perfect “Christian”, or the perfect person in whatever religion we practice, yet we still have people among us, (brothers and sisters) who will compare one sin over the other. Even if the sister was condemning her brother ‘out of love’, it’s not her place to sit there and tell him what to do. Maybe she can ‘suggest’ a better idea, however, belittling him only generates more anger and resentment. Their parents love them regardless. They wouldn’t ever let them go, even if they did find out about the daughter sneaking out at night and the son tapping into that dirty website. Most parents would talk it over, try to correct them, and of course, punish them for their ‘wrongs’, but never, would they cast them to another household. (Hell) The brother and sister love their parents with all their heart. And maybe they will continue on doing what pleases them, however, it doesn’t mean the parents will disown them. Each child has their own personal relationship with their parents.

I am frustrated with other Christians. It literally makes me want to change religions altogether, but I’ve already developed a strong relationship with God, so I can’t. I know He exists. I know He hears me when I pray and I know that He realizes my frustrations with other people. I got too caught up with other people’s judgments, when I should have been more focused on the Lord. Those “bad eggs” that come onto my website aren’t bad eggs, they’re just misguided in my opinion. They’re ugly in spirit and see things in a negative outlook. I find them to be insecure about who they are. They’re also seeking answers. Why would they lash out so harshly? I’m readily to admit my inquiries about God and what’s right and wrong.

“I've watched a bit of the back and forth of it, but not too too much because honestly, it's just a waste of time. However, in my estimation, the HUGE difference between folks like those we will not name and authentic Christ-seeking Christians is this; if one is really Christ seeking, they tend to come up with WAY more questions than answers. Those folks you squabble with from time to time have all the answers. They're done. They've got it all figured out. Ok. Fine. Whatever. The situations that cause me to grow the most in my Christ journey are those that cause me to engage the questions, to engage in relationship to others who are seeking. Those who have hearts that are pliable and forming more and more into the likeness of Christ. Those we will not name have their tenants of faith stacked up like a brick wall. If they were to let a chip come out of even ONE place in the wall, the whole thing tumbles down. That's why they spend so much time and energy keeping the wall fortified, so much so that they are never mushed and squished by the Spirit into the very image of Christ.”

God wants us to come to Him as a child. He wants us to ask questions and keep seeking for the truth. None of us have 100% wisdom to know every answer. We can claim we do, but then our journey would end there. We need to grow in Christ and claim Christianity in the way that suits God best, and the way that suits us best. Glorify Him, and we’ll reap the rewards soon enough. We don’t have to be perfect humans in order to be loved by God, we just have to be vulnerable and willing to learn with opened hearts.

Why is everyone’s relationship with God a question to other people? Do they know your salvation? Do they know where you’re going in the afterlife? They can read the bible as much as they want, theologians can bop you on the head with their good book, but have they studied the written word in their hearts? There’s so much more depth in reading a passage in the bible. I can write a sentence, have it mean one thing to one person, and have it mean something totally different to another. Maybe I want it that way. Maybe I want them to interpret it on their own and find their own personalized paths.

“It’s easier to accept what is real, yet still remains an illusion of one’s belief.”

What does this sentence personally mean to you? Read between the lines and feel free to give me your definition of it.
beliefs Christianity faith God religion