- May 23, 2007
The best effective way to get a message across, is to be compassionate, patient and understanding of whatever response you’ll receive in return. When speaking about religious matters, people have to realize that religion is based on “faith”- not fact. For instance, if I was trying to feed a baby that mushy banana food, and he didn’t like it, I can’t cram the food down the baby’s throat. He’ll simply close his mouth and cry. The best way is to find a different approach. Maybe he’ll like the peach stuff better. Force-feeding anyone will result in a negative outcome. It doesn’t take a rocket scientist to figure that one out. 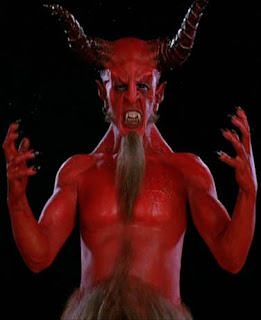 Dani and Mark, who profess to be Christians, feed their fellow believers with profanity if we don’t fully accept what we’re hearing from them. Think about those movies, like The Exorcist, and other flicks that portray the devil. At first, the devil will give you the most intellectual conversation. He makes sense at first. He comes as an angel of light. (Or, he comes “in love”.) You think, “Hmm, he’s really changed and his statements are really convincing.” Once the two of you have established a civil conversation, you’ve established a method of “listening with an opened heart”. Now, that the portal has been opened, the real seed starts to spread. Words to convince you to turn from God, renounce your religion and draw farther from God, come flowing out of the mouth that you’ve been willing to listen to.

Once you’ve rejected the message he’s trying to send you, he starts cursing you. The devil starts foaming at the mouth, using profanity and poking fun at your weaknesses, in order to hurt you, belittle you, and to knock you down a few notches. He’ll plot, scheme in his little hidden basement to come up with a new plan to attack you. He’ll keep focusing on you, until you become weak again.

It’s what Mark and Dani try to do on a constant basis. They come “in love”, as an angel of light. They even call themselves, “Christians”. Am I judging these people? I’m not judging their character or their life outside blogworld- I’m simply observing how they’ve treated me. They’ve hurt me with insults, and have told me to practice a different religion- which is the worst sin of all in the bible. (Even in their bible.)

“Deb, you dear are the 'closed minded' one. The second anyone one disagrees with you even in true concern and love, the hate and bigotry bottled up in YOU sweats from your skin and lips like a sickness! You dear are the SOS (samd old shit) everyday. It does not take a scholar to realize as much. You're like a very clean glass window...transparent.I love you Deb, that's why I and folks like Dani are the first to say you're full of crap with your God loves any opinion bullshit. hugs and kisses! ....as I wash my hands before I boil and eat this lobster...ms hypocrite who knows it. :)

Do you have ADLGD?...of course you do, that's why we have Rx's to help. No need for Christ when one worships at the alter of 'cause I feel like it. See, you're ok! be yourself dear. It's all good in your god's sight, all good! All good! and don't you let anyone tell you different. God's word is only in each person's heart! just like those who flew planes into buildings on Sept 11, 2001. My God is Your God and their God. Who can Judge ?? Not me! I love all gods and so does God!Yep, it's in the Bible.”

Even his “hugs and kisses” are used with sarcasm. He hides behind the Christian label, throwing fire at those who are different, those who have different relationships with God.

Dani is no different. Her comment to Mark was out of the “same love”.

"Hey Mark - I just posted this too and I dedicated it to Deb with love! Go check out her comments. At first I thought there was hope, but unfortunately it turned out to be the SOS (same old shit). Too bad. Guess we'll just have to keep praying that God will show her the Truth."

When these people say, “I love you,” don’t believe it. They’re self-righteous and feel as though God approves of their ways of teaching others how to be a good Christian. Are there any “good Christians” out there? No. We all have flaws and imperfections. It’s called, being human.

I’m not trying to put these two into the fire by displaying their hatred towards those who are different, especially homosexuals, which they seem to focus their entire lives to, but I’m trying to show how ignorant their message sounds when profanity and insulting words are used.

Again, religion is based on “faith”, and not fact. They do not know for sure, if what they are revealing to us is truth. They don’t---it’s literally impossible. What I tell you, and everyone else who reads this blog is out of pure faith. I cannot say it’s “truth”. It is, however, truth for “me”. But that’s different than displaying your belief as truth. To say that your belief is truth for everyone is a major oxymoron. The lack of intelligence that goes behind this concept is the mindset of a cult-like group. They have blinders on, willingly, going around making irrational comments. They’re not helping anyone. They’re spreading hatred. You even see this type of stuff with the Phelp’s family. They spread hatred over to their children. They’re taught to hate “faggots”. They’re taught that gays and lesbians are equivalent to those who are pedophiles, violent rapists, murderers, as well as people who distribute child porn.

Now, as a follower of Christ, I will even ask this question… What if, we all open the doors into the afterlife, to find that Jesus is sitting among Mohammad, Buddha, and many other Gods, waiting for our return? They all ask us, “So have you figured it out yet?” And we look at them in shock, our jaws opened wide in awe. What if they’re all sitting up in heaven laughing at how we’re acting?

Who’s to say that can’t happen?

However, my beliefs are different, but then again, I can be wrong. You just never know. How ironic would it be that we’ve been fighting, debating and killing each other over what’s true, when in fact, all of it is!

Do all roads lead to Rome? Or are we all set apart for one God. Are all Muslims going to hell? Are all Jews destined to dive into a pit of hell? Are all Buddhists going to be swimming in a fiery pool?

Our brain is incapable of grasping the meaning of life. If we were to grasp that understanding, our brains would just explode. We’re not equip to know the truth. It’s like fish trying to comprehend algebra. It’s impossible.