- January 04, 2006
Is it true? Have I become ‘one of them’? Those friends who are way too busy to even give you a phone call to see how you’re doing? Am I the type of person who’s way too busy with a bunch of nothingness to even send an email? Chatting is a waste of time and energy—a bunch of text all crammed in a little box telling one another lies about how ‘good’ everything is. Or is it? When I worked twelve hour shifts at a conventional job, it was like I had all the time in the world. I always had time to hang out with a friend after work for a beer, or go out for dinner—and now, it seems as though my motivation to even keep these relationships alive, have me somewhat puzzled.

Consumed in my writing and getting my book out has become priority to me. Even when I’m done thinking I’m complete with my editing, I have Madelene go over it. A second pair of eyes is always good. I have her consumed as well. Madelene sometimes gets off at 8pm, and I’m still working in my office. We meet one another in the living room to watch a show or two, and then go to sleep. The cycle then continues.

The other evening, I decided to take a break around 5pm, and grab myself a cup of coffee at a café nearby—by myself. Madelene was working late, and I needed to get some fresh air. As I was driving down the road, my mind changed. It was as if some unbalanced chemical flooded out a few cells in my brain. I decided to go to our favorite restaurant. I planned on bringing home dinner for Madelene to surprise her. I didn’t even call it in. I wanted to sit at the bar, enjoy a glass of wine by myself, and possibly socialize.

Vinny, the owner came over to sit with me. His broken English trying to get the right words out were absolutely draining. I love him though---I’ve known him all my life, but it’s a challenge to try and decipher every word.

“Debbie, right?” A woman at the bar called out to me.
“Yes…”
“We worked together at the telecommunications company, remember me?”

Immediately I recognized her and the lady she was sitting with. Jean was an account manager for the company I worked at, and Joyce was the district manager of the entire corporation. (I believe—correct me if I’m wrong guys!) We instantly started talking, remembering people who worked with us. Both Jean and Joyce left the company as well.

“So what are you doing now?” Jean asked.
“I’m a writer and work from home.”
“Well isn’t that something!” Joyce says, as she puts her drink down. “I’ve always wanted to be a writer. That’s great! How did you get there?”

I explained to her how I went through certain situations in my life that led me to write in a journal on my computer. It ended up turning out to be a book. It took a few years to get it published, but I kept at it. I explained to her that blogging also helped me. To be in a writer’s community where you can be critiqued and network with other talented people is just truly amazing. I always thought blogging was for teenagers to vent their frustrations out--but as it turns out, I find more intellectually stimulating adults writing. It’s not just for ‘teeny-boppers’ anymore. She took down my web address for my blog, and said she was going to read it. She also said she wanted to try blogging out for herself. I was quite flattered that she would take my consideration for it. I always respected Joyce, because she wasn’t one of those executive types that had no time for you. She really listened to your concerns.

I remember working in the same company as Joyce, and the union I was in was planning a strike. This union was like a fricken cult. Every Thursday we had to wear a red shirt (well it was advised), and we had to go to their meetings after work. I never went to one. Their politics were horrible, and their moral was down—so it was all negative energy flowing into one room. Not for me. As we all planned to lose our jobs, I remember my views on why they were striking.

First of all, most of us were making $20 per hour and up. Not to mention we also got commission on sales that we did. So a base pay of $20 per hour, lots of overtime, and a commission check at the end of the month---I was making as much as a nurse! I felt so guilty about arguing over raises. Don’t forget, this is going back five years ago in upstate NY. The pay rate is lower than the city’s rate.

I wrote Joyce an email, thinking she would never have the time to write back to me. I told her how grateful I was to have this job. I explained how upset I was about going on strike. The main issue was, they were bringing in new people at a rate of $11 per hour. This was intimidating for a lot of senior employees who’ve been there for like twenty plus years making close to $30 per hour. It basically meant that they ‘may’ be replaced one day.

Joyce wrote me this long email back to me. I was surprised. She appreciated my opinion and view on the matter, and explained much of the situation to me. I really thought my email would have ended up in her trash bin of her computer, but it ended up being priority. Now, being that this was almost five years ago, she has probably forgotten this--but I do want to thank her on this post for acknowledging my email. She always acknowledged everyone’s views. You weren’t just a ‘number’---or----‘that employee’; you were a person who was valued. Joyce made you feel that way. If I ever end up working for a corporation again, I hope she hires me.

Jean is another person who was always sincere when speaking to someone. I always saw her out in the break room getting her coffee as I had my 3pm lunch. Jean always made it a point to not only say ‘hello’, but she also inquired about your life and what’s going on—she’s very personable. There was a time where I was trying to get Madelene in the company. I asked Jean, because she was the manager of outside sales. This was definitely Madelene’s forte. I remember Jean took the time out to talk to Madelene about the position and gave her an opportunity to work there. Madelene declined due to pay and other factors, but was grateful that Jean went out of her way for her.

Both Joyce & Jean truly left an impression on me. They both possess this ability to treat people with respect—whether you were working in the mail room or pushing a broom---they would always stop and talk with you to see how you were doing. They saw people for ‘who they are’, not 'what they did'. Maybe it’s because they worked so hard to get to the top that they never forgot where they came from? I’m not sure what it is, but I will always remember how they treated others.

I’m so happy I got to bump into them. It really made my evening to see them again. It’s been quite some time. I wish Joyce the best in her writing ventures, and I wish Jean all the best with her new marriage!

When I got home from the restaurant, I got a phone call from my friend Tamar, who also worked with us at that company---in fact, she still works there.

“Deb! Come out with my sister and me. Meet us at the sport’s bar for a drink!” She asked, thinking that I would say, “Oh no, I’m so tired Tamar, maybe next time…”
“Sure. I’ll be right over.” I shocked the hell out of her. We ended up having a great time over a few pints of beer.

A few nights later, we did it again and met up with a very nice couple. I saw my friend who owns a gallery that I help out on occasion—and it was so nice seeing her again. She inquired about starting a blog of her own. Since I’ve started my own blog for the first time in July, I have had five people start a blog of their own.

So, my whole point of this story is, for my New Year’s resolution, I am going to stop cramming all my time and energy into my work, and balance it out by getting out there and spending more quality time with my friends again. I really missed them more than I knew. 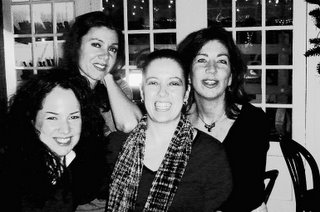 Don't pretend that you love others. Really love them. Hate what is wrong. Stand on the side of the good. Love each other with genuine affection, and take delight in honoring each other. ~Romans 12:9-10