- June 15, 2020
Whether you like it or not, your fight is not my fight. You can't force people to be on "your side" or have the same opinion or beliefs as you. For instance, a vegan friend of mine claimed that I must not really love my dog that much since I eat meat. Listen, I totally respect your stance on not eating meat, whether it's for your health or for saving animals, but since the beginning of time, we were put on earth to eat vegetables and meat. The same friend put her dog on a vegan diet, which I disagree with---but I never told her I disagreed with it because it's none of my business. Dogs are omnivores. These kinds of different point of views can bring a strain on the friendship if one is trying to convert you over to the other side. Even little 'digs' here and there are uncalled for. It's like me saying that if you don't pray to the same God I do, then I refuse to be friends with you, or I'm constantly gonna bring it up so you'll finally give in, or give up on our friendship.

Even politically speaking, friendships are being torn every single day now. This entire pandemic has taken a toll on all of us to some degree, mentally and physically. We've worked so hard on flattening the curve here in New York, and we finally did it---or so we think we did. We social distanced for three whole months, many 'sheltered in place' and all of us, are ready to go out and live our lives again. Sadly, after businesses have shut down for good, and some people even lost their homes, I couldn't imagine another plague wreaking havoc on us....and that plague is: rage. Everyone agrees that the tragic death of George Floyd needed justice--no doubt. So, the protests began, some peacefully, some not. During the height of the pandemic, thousands upon thousands gathered together in every city and in every state to show their outrage. They also made sure to destroy businesses, some to which belonged to black store owners. Not only did they destroy businesses, but they also went into residential neighborhoods and burglarized what they thought were "privileged white folks." Both cops and civilians were killed, because of rage---because of flat out racism.

Julie Powell wrote a powerful piece on her thoughts regarding dismantling monuments to remove historical events. 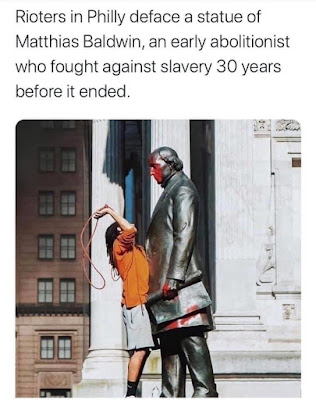 "These solutions are clearly absurd because history cannot be re-written. It’s fact. Subject to interpretation? Certainly. But it’s fact nonetheless. And it is for this reason that destruction of confederate monuments are futile. Regardless of our own personal sympathies, the Confederacy, the Civil War, and slavery are just as much a part of our cultural heritage as the American Revolution, the good as well as the bad, and these are facts we must confront.

This requires redefining what a monument is. Some argue the only purpose of a monument is to commemorate the dead. But in my view, monuments have manifold purposes, from highlighting the nauseating evils humans are capable of, to sparking a conversation about important political events. Nazi concentration camps do not still stand in Germany because Germans want to promote Nazi virtues. They stand as reminders of the evils that occurred because of Nazi ideas.

The most common objections to the preservation of Confederate monuments is that the alleged “purpose” of many of these monuments was to promote white supremacy. But by that logic, perhaps we should seriously reconsider the Lincoln Memorial, since it was erected, not to celebrate the eradication of slavery (something Lincoln himself never fully achieved), but to promote nationalism.

And the notion that Confederate Monuments celebrate white supremacy hardly aligns with modern day sentiments. Having lived in Georgia for 18 years, neither I nor anyone I know — whether they be black or white — has ever considered confederate monuments to promote white supremacy. Rather, these monuments are part of a cultural heritage honoring ancestors who died for a cause they believed was right. And while we may not agree with their decision — I readily admit that southern states were wrong to secede — this only adds to the gravity and importance of preserving these monuments: so that we do not make a similar mistake.

Perhaps the best place for Confederate monuments is not in the middle of the public square; perhaps they ought to be placed inside the Met or a newly-constructed American equivalent to Momento Park (a Hungarian park containing statues of Communist leaders). But in any case, Confederate statues certainly do not belong inside a dumpster outside the UNC campus while Americans applaud themselves for somehow “paying the debt” for their ancestral sins."----read more here.

Those who cannot remember the past are doomed to repeat it. So by removing these monuments, flags and other artifacts of our history, is removing what truly happened, so that it will never happen again. The good and the evil.  As I was reading the news, they had also stated that they were removing the movie, Gone With the Wind. This classic movie has been taken off HBO Max following calls for it to be removed from the US streaming service. HBO Max said the 1939 film was "a product of its time" and depicted "ethnic and racial prejudices" that "were wrong then and are wrong today." What next---The Color Purple? Rosewood? When you erase history, you are erasing the minds of our future generation who may need to be reminded of what's wrong and right.

Another question in regards to this topic: for every black person who is Christian, Baptist or other, should we remove the scriptures in the Bible about slavery? Or maybe we should leave them there to learn from it?

So, let's talk about my vegan friend again---the one who told me I must not love my dog enough, since I like to eat meat. She believes that it's okay to destroy businesses and riot, while protesting. "It will have a greater impact so that it won't happen again," she said. See, I believe in a protest, but here's where my dilemma lies: 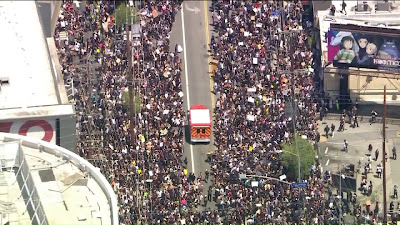 There are a lot of conspiracy theorists who truly believe that what we're seeing in the media and in our own world is a product of population control. Some explain that the officer who knelt on George Floyd was a "crisis actor." So basically it's all about "stirring up the world" and making them go out by the THOUSANDS so they can kill off more people. That's what you're doing whether it's a conspiracy theory or not. You're participating in killing off thousands if you're a part of the huge crowds protesting in the middle of a pandemic. And whether or not you think COVID is real or some kind of "hoax" --- well then that's up to you. Nobody knows anything at this point, but common sense goes a long way.

And lastly, some comforting words from the Bible to help you sleep at night. If you have anxiety over  what's been going on in our world, trust in God and know that prayer can move mountains!


1. Deuteronomy 31:8 (NIV) The Lord himself goes before you and will be with you; he will never leave you nor forsake you. Do not be afraid; do not be discouraged.

2. Joshua 1:9 (NIV) Have I not commanded you? Be strong and courageous. Do not be afraid; do not be discouraged, for the Lord your God will be with you wherever you go.

3. Psalm 46 (NIV) God is our refuge and strength, always ready to help in times of trouble. So we will not fear when earthquakes come and the mountains crumble into the sea. Let the oceans roar and foam. Let the mountains tremble as the waters surge!

4. John 14:27 (NLT) I am leaving you with a gift - peace of mind and heart. And the peace I give is a gift the world cannot give. So don’t be troubled or afraid.

I heard the crowds chanting, "I can't breathe! I can't breathe!" I'm afraid that many protesters are going to be chanting that up in the ICUs if this pandemic is in fact, not a hoax.

Whether you agree with me or not, that's OKAY. It's okay to agree to disagree sometimes.

For more of Deb's articles, please visit: www.debrapasquella.comor join her on Facebook and Twitter. Check out her cooking blog at DebsCucina.comfor some of her famous recipes!
BLM COVID pandemic protests vegan veganism