What Lies Beneath the Consciences of Antigay Christians

- April 29, 2015
Years ago, I had a straight friend who would ask me so many questions about being gay -- anything from what type of girl I liked to what I did in the bedroom. I was always uncomfortable being asked these things, because even if I was straight, I don't want to explain anything that personal to a friend. She always wanted to know details and "how" can two women be together 'like that'. Why was she so curious? A year later, I found out why. She had her own issues of being "bi-curious' -- she didn't know if she was straight or gay. Many people feel that way, they can go either way -- and that's okay. It's who you love regardless of the gender for some people. Even these days, I have had three people that seemed like they were badgering me about religion and sin and whatnot. I always take the time to respond and give them my views, interpretations and outlook on homosexuality vs. religion. Well, two of them happen to be ex-gays and the one girl happens to be caught up in a love triangle with her husband and her husband's friend. She eventually left her husband and married the new guy. In the Bible, divorce is a sin. What she did is considered "adultery" in the Bible. In order for it not to be a sin, her late husband needs to be deceased, before she can remarry. (Sounds like an episode on Snapped.) So let me just give them pseudo names for a moment. "Sam" knew the Bible inside and out. He quoted scriptures from Leviticus, Corinthians and Romans that "clearly" state that homosexuality is a sin. After I explained those scriptures to him and the context to which they were in, as well as where the word "homosexuality" derived from 2000 years ago, he was sort of stumped. I didn't mean to put Sam in a state of confusion, but the beliefs of other Christians scared him away from being himself. "Mike" came to me letting me know his distaste for "twisting the scriptures to suit my lifestyle". (That's a common phrase among many antigay Christians.) He was much more abrasive than the others, where he got super defensive in his argument. I told him that God doesn't see gender, He sees love. He disagreed, so I asked him, "What about an intersexed person (hermaphrodite) who has both, male and female genitalia? Do they have to remain single? What gender are they supposed to pick?" Nobody -- not one person can give me a concrete answer. That's why I know God does not see gender. Not even a week went by before I got another private email letting me know that he too, was once in love with a man. "Tammy" tried giving me a debate, but because of her own fear of "sin" -- she wanted to know more or less if she was going to hell for loving another man. The only thing that I can say is -- you have to have a relationship with God, faith and to be able to forgive yourself as well as ask for forgiveness. I do believe infidelity hurts people, which is why I believe forgiveness is in order, not for just the person who was hurt by the action, but for the person who initially did this for reasons unknown. I am not one to judge. I still have many stones inside my pocket.

But you see a common theme here? All three of these people who contacted me were asking me so many questions because they feared their own fate. My entire point is, whenever you come across someone so rigid and against gays and lesbians, (or whatever it may be) you have this underlining reflection of who they truly are. This is not the first time I have said this, but I truly believe that homophobic people have homosexual tendencies. The fear that goes into the "FEAR OF RELIGION" is what sets them apart -- becoming defensive in debates with other Christian gay people. Look at what happened with Rep. Randy Boehning, a 52 year old Republican legislator from Fargo, North Dakota who also happens to be a lawmaker who recently made a public retaliation against expanding gay rights. He sent explicit photos of himself to a 21 year old man named, Dustin Smith. Smith recognized Boehning by his photo on Grindr -- a gay hookup site. Boehning was under the name, "Top Man" while chatting with these young boys. Boehning also stated that there were people in his life who also knew he was gay and was glad that he is now outed. So why would he vote against gay rights? Was it to hide who he truly was? Was it all out of fear?

Of course you heard about the bakery, Sweet Cakes in Oregon? The bakery owners refused to bake a cake for a lesbian couple for their wedding, citing their religious rights. A civil complaint was filed by the lesbian couple and on Friday, the judge fined the bakery $135,000 in emotional damages to the couple that they turned away. Aaron and Melissa Klein, the owners of Sweet Cakes set up a GoFundMe page. Melissa stated on her Facebook page that the amount owed would put them out of business. GoFundMe raised over $100,000 before it was shut down the very next day. Melissa wrote on her Facebook page: "Satan's really at work but I know our God has a plan and wins in the end!" The thing is, the Kleins violated the their state's anti-discriminatory laws, which gave GoFundMe the right to refuse service to the bakery owners. Now isn't that a kick in the ass? A little dose of her own medicine.

This is not about being "religious" and keeping your faith by discriminating against gays. This is pure bigotry, because you're not turning away people who have tattoos, those who are clean shaven, divorcees, or people of other faiths -- people who worship other gods! You're picking one group to demonstrate your bigoted views. And in return, when the same thing is done to you -- it's uncalled for. I mean, personally, I would've just left the bakery and headed out to another one. I couldn't care less if you didn't serve me, because I know that God works in mysterious ways and that eventually, you'll learn to do what Jesus did: accept and show love to all people. There are too many hypocrites in the Christian faith which makes it very hard to even call myself a Christian. But, because I have studied the Bible for over 20 years and have a relationship with Jesus -- I know that I know that I know -- that if you treat people like dirt, then you are treating Jesus like dirt. That's right in your Bibles too. The amount of energy and hatred that is demonstrated by Christians only tell me that they fear their own fate. They are guilty or "feel guilty" about something brewing within their own lives. We all have our 'thang', and none of us can throw stones, but when you feel "righteous" enough to tear other people apart in the name of God -- karma has a funny way of teaching you valuable lessons. 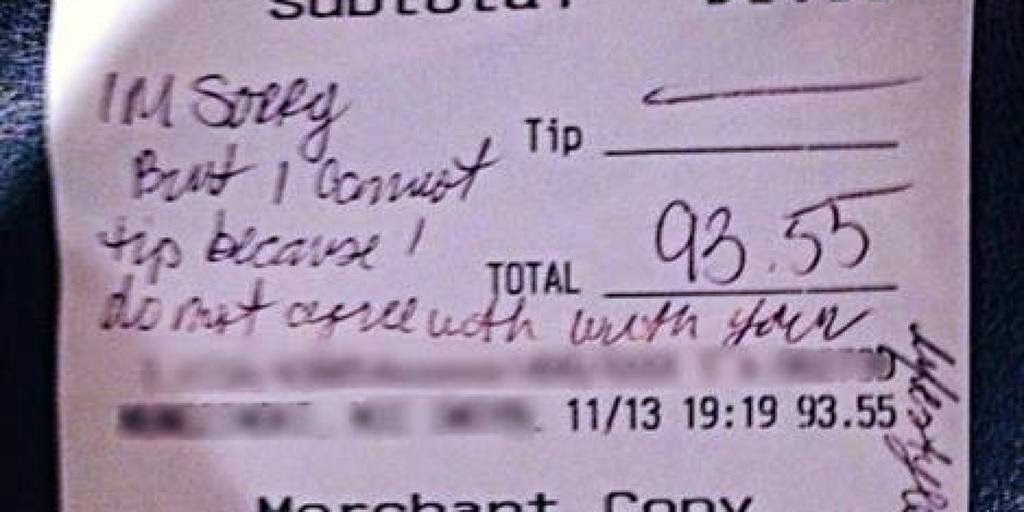 Just recently, a gay waiter over at Carrabba's Italian Grill in Kansas served diners who refused to tip him. They wrote,


“Thank you for your service, it was excellent. That being said, we cannot in good conscience tip you, for your homosexual lifestyle is an affront to GOD. Queers do not share in the wealth of GOD, and you will not share in ours. We hope you will see the tip your fag choices made you lose out on, and plan accordingly. It is never too late for GOD’s love, but none shall be spared for fags. May GOD have mercy on you.”

They sound like good church-going folks, don't they? First of all, it's none of their business who he loves -- and how did they know for sure he was gay in the first place? (I mean, yes -- sometimes the gaydar does reach high frequencies) -- but to just automatically assume, is ignorant in itself. Then, they don't just put their twisted religious views down, they called him a "queer" and a "fag" and said he would not share in the wealth of God. Isn't it sad that there are so many Christians who focus entirely too much on the LGBT community -- as if they were envious of them in some strange way? This is why I love it when someone who bashes gays and lesbians comes out as a homosexual after the smoke clears. So next time somebody focuses on your lifestyle a little too much, ask them what kind of struggles their having with their own sexual orientation. I'm sure there's something brewing underneath it all.