June Thomas: If You Want Acceptance, You Have to Give it First 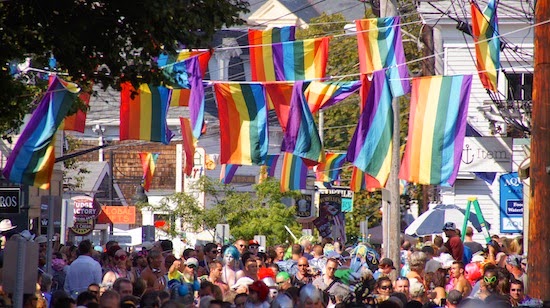 Back in the day when I used to frequent gay bars around the area, I rarely took note on who was straight, bi, gay or lesbian. All I knew was that it was a place that accepted gays and lesbians - it was a place that accepted me. Anyone else who wasn't gay or lesbian were more than welcome to come join us. It wasn't a big deal, unless the person was some sort of pervert harassing the clientele -- that's a different story. That can happen anywhere. When my wife and I go to places like Provincetown, 90% of all bars and restaurants are gay and lesbian clientele, who are also "straight friendly" --- meaning, they accept everyone. We don't judge you by your orientation, because we don't like it being done to us when we walk into a straight establishment. Makes sense, right? 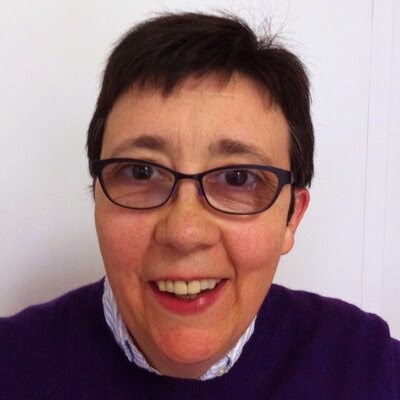 June Thomas, a writer and critic for an online magazine called, Slate, feels a bit differently. In fact, she feels that heterosexual people should not even walk into a gay establishment. She sends off a very strong message, "this is our place -- our turf" --- and makes it known that if you are straight, that you are not welcome. On top of that, if you're straight mingling with 'us' --- that you need to tip more, as she calls it, "the straight tax". She also stated, "If you go into a gay bar, just turn around." That statement also included straight or gay men who walk into a lesbian bar.  Let me just say one thing about that statement alone. Provincetown has these specialized weeks for people who vacation there. Some weeks are for the bears, some dedicating it to women of color and in October, it's "Women's Week". I cannot tell you how much I detest Women's Week because of the lack of gay men and drag queens. Men make the place that much colorful, and without them, it's just vanilla. I will say, people (mostly bull dykes and man-haters), much like June, are the ones who frequent Women's Week. June admits she is a "separatist", so it says a lot about her character. It tells me, that somehow, in her past, she was extremely hurt by a man. She wants to separate herself so eagerly at any cost to her reputation.

I only separate myself from things that I fear. I fear things that have hurt me. I fear getting stung by a bee. I avoid them at all costs. I fear food that make my face and tongue swell, so I avoid it. Luckily, I was never hurt by a man before. If I ever was, I would probably fear them too, but I have the know-all to realize that every single human being is incredibly different. I don't place blame on an innocent person just because someone in my past made it difficult for me. If you listen to June's nonsense, she is anti-straight. Why do you think she hates straight people so much? And why does she hate gay men? I even get this feeling she's a man-hater.  So a few heteros stood firm on their religious beliefs. Go on with your life. As far as gay men, here's what happens: gay men are mainly drawn to straight women, aka "fag hags". Gay men are also more prone to socializing with feminine lesbians. For whatever reason, most butch women do not get along with gay men, vise/versa. It's not only my opinion, I want to even venture to say that it's a fact. I guess you would call it a social observation of mine.

If we set the bar equally, as June feels --- then how about taxing all gay and lesbian customers who wants to buy a cup of coffee at Starbucks? If you want so much acceptance, then you need to also give acceptance. And just because straight establishments are outnumbering the LGBT ones -- that should only give us more motivation to accept all people of all lifestyles. You show the world how they should behave by your example, not do the total opposite. This only separates us even more and makes it difficult for others to instill equality, especially for our lawmakers. We set by example. When you have a bigger soapbox to step on, a platform to where you can voice your opinion to millions of people, why would you ever try to separate people? Why not bring them together instead? 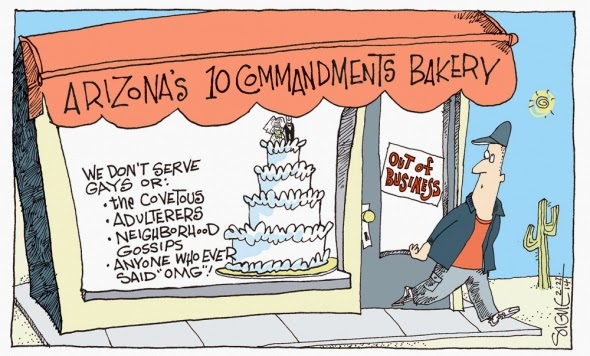 Remember when AZ and other states wanted to pass a bill that would enable business owners to have the right to discriminate against anyone (especially the LGBT community) under the banner of "freedom of religion"?  If the law was passed, a business owner can refuse services and/or kick you out of their establishment because you were homosexual. The LGBT community were outraged that they were trying to set us back 50 years -- to a time when they even discriminated against different races. "No blacks allowed."  Well what if gay establishments put, "No straights allowed" signs on their buildings? That would probably draw some negative attention from some negative straight folk. I'm sure of it.

People like June Thomas, a militant lesbian who wants the whole world to be gay and lesbian, gives the LGBT community a bad name. These are the types of "gay bullies" if you will, that make heterosexual people angry. By her example, she can easily make a heterosexual person feel that this is everyone's view. And I assure you -- it's NOT. If lawmakers only looked at examples as bad as June Thomas, then I'm sure it would be that much challenging to have equality here in the states. And if publishers such as Slate want to let her be the voice of their website, then they're going to lose a lot of readership from all the ignorance they're airing out to the public.

Take a look at her video.

A separatist or a bigot?

For more of Deb's articles, please visit: www.debrapasquella.com or join her on Facebook and Twitter. Check out her cooking blog for some of her famous recipes!
equality gays and lesbians heterophobic intolerance June Thomas LGBT militant lesbians Provincetown religious freedom Slate