Filling Up the Tank 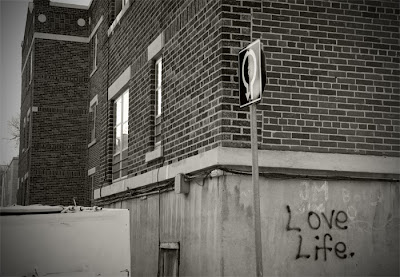 What's it been, a 5 day break? Not bad. Every time I jot stuff down in this blog, things seem to 'move' mysteriously. My pain has lessened, from a level 10 on the pain scale to a nice solid 5. I can definitely deal with that. Anyone who says that laughter is the best medicine has never had sciatica pain. I had a couple of friends over last night who nearly put me right back into the hospital because they made me laugh till I literally HURT. So, it flared up a tad and I was able to maintain without the drugs. This entire summer was just horrible, horrible, horrible. Pain, drugs, hospitals, ER nightmares, doctor appointments, blah! I went shopping yesterday and grabbed a shirt that says, "LOVE LIFE". Yeah, me. I truly believe there's some truth to the saying, "Gotta fake it till you make it" -- so I'm sticking to that. Here I am sitting in my beautiful office complaining about sciatica pain and how scared I am about taking pain meds, while there are people getting decapitated, raped, murdered and gassed with chemicals in Syria. I have no right.  "Oh, my back hurts, lemme just lay down and watch a few hours of Twilight....again." Meanwhile, we're close to coming head to head with World War III. There are people in the world who don't even have access to fresh water to wash down their $400.00 bottle of Cymbalta. Wait, what?

And yet, I'm still going to complain -- don't try to stop me. I have this physical therapist, (if that's what he truly wants to be called), who doesn't do....physical therapy. Lemme explain. He rounds up approximately ten people, puts them all in individually into little private rooms and places these cheap ass TENS units on them (seen in the photo on the right) that Medicare flings at him and then gives them a sonogram that's older than the hills on their back for deep penetrated heat. Not one person gets "physical therapy". They all get electrocuted and heated up. He charged me $17.00 per visit. I was seeing him three times per week. (God this is reminding me of those math problem solving paragraphs, bear with me.) So all in all, I pay him $204.00 per month with insurance on top of that...to do nothing. I said to him, "Listen, I really can't afford to pay this and your competitor is only charging $5.00 for the copay. Why is yours so much?"  He said, "Well kiddo, it's tough being sick in this economy." I just stared at him and said, "Really? That's the answer you're going to give me when I'm stepping out of your office and into your competitor's?" He then begged me to stay and said I didn't have to pay anything. So now I'm even more pissed off because he screwed me out of over $400.00. Now, if he had offered to give me my money back, I'd have some sympathy, but I truly feel that this guy is a complete fraud. He then gave me this report to give to my rheumatoid arthritis doc that basically explains everything he did during physical therapy and for my doc to sign it so I could get another six week prescription to continue physical therapy. The report said he did all sorts of amazing exercises to strengthen my core. He didn't do anything but plop me on a steel chair with a TENS unit to leave me to do the same for someone else who's paying up the nose for nothing. Do I report him or is this normal? Geez, I wish I had his job.

But atlas, things are seemingly looking up lately, so I decided it was time to do a little something for myself, so I went to my favorite hairdresser and got my hair did. While he was dying my roots, because I'm grayer than an old bitty screaming BINGO at a church potluck, I felt my scalp burning - I mean, BURNING the hell out of me. I didn't say anything because I just thought it was dissipate after time...after my brain melted out of my nasal cavities. Then they put some sort of glaze treatment in my hair, left me with my neck dangling in the sink for about 45 minutes. When he finally cut and dried my hair, my head was pumping so hard with a migraine that I couldn't even see straight. When I got home, my headache progressed to a level 10 on the pain scale --- with nausea. So what does the hypochondriac do? Yep. Went right to the internet to look up "migraine from hair dye". If you enter that into Google, you will never....ever...dye your hair again. People's faces were blown up as if they were allergic to bee stings. Their scalp, neck and chest had third degree burns on them and worst of all, somebody's breathing completely stopped! Like what the hell is this shit? Then it happened: the entire back of my neck was red with a rash and I started to get itchy. I jumped straight into the shower at 12 midnight to wash my hair three times. I have to admit, it felt better, but I was still itchy. I had to wait it out a couple of days, but I'm still here alive and kicking thank God. So much for treating myself. That was complete torture.

So that's my little update for now. I'll be back, I'm sure. Thanks for all the support and encouraging words. Helped a lot.

For more of Deb's articles, please visit: www.debrapasquella.com or join her on Facebook and Twitter. Check out her cooking blog for some of her famous recipes!
hair dye allergy love life migraine from hair dye physical therapy TENS unit