- February 13, 2013
If you're going to judge on the base principles or historical events upon someone else's religion, then be prepared to read your own bible. As I pointed out yesterday, the tweeter who goes by Dartell stated this:


DarTell ‏@DarTell
@dpasquella No not westboro follower. You love your dog right. In Islam Dogs are hated and .... Get the picture.pic.twitter.com/yNm9vIBL 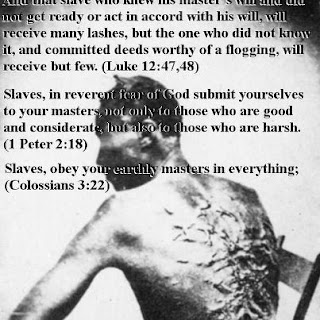 The photo she included had Muslim people (or thought to be) beating upon dogs. I asked her if she knew why we had so many rescue and kill shelters here in the United States. My dog was a rescue pup. She was abandoned and left for dead in Puerto Rico. Millions of dogs around the world are beaten and treated horribly. "Well Muhammad hated dogs." Okay. And so you want to hate all Muslims because of this? So the Qur'an has some historical teachings about the way they treated women, dogs and so on. Another reader also asked me to read the Qur'an and learn about all of their sins, to which homosexuality is detested. He also listed a few more sins of Muhammad. But what about the Holy Bible? I want to remind Dartell that slavery was "okay" in the Bible, in fact, it was encouraged. Do Christians feel the same today about it? Of course not. Death as punishment, getting tattoos, eating a ham sandwich, shaving your beard, getting male genitalia injured or having it cut off (many MTFs out there) will not enter the kingdom of heaven, as it states. Other abominations include, reading your horoscope or going to a psychic, reading People magazine (which is gossip), having your wife fight your battles, remarrying after a divorce, (remember the scarlet letter?), working on the sabbath - Saturday or Sunday (hope you don't have a gift shop or work in retail), women speaking in church, eating shellfish, premarital sex, and last and certainly not least, rape was condoned and approved in the bible. Just read Judges 21:10-24 NLT. 4) Laws of Rape (Deuteronomy 22:28-29 NLT) "If a man is caught in the act of raping a young woman who is not engaged, he must pay fifty pieces of silver to her father. Then he must marry the young woman because he violated her, and he will never be allowed to divorce her." (Deuteronomy 22:28-29 NLT) Polygamy, rape and baby killing were all apart of the Holy Bible. If you're going to hate a particular religion based upon historic teachings, then you might as well hate every religion due to its past.

I have absolutely no tolerance for ignorant small-minded people who judge innocent followers of a religion. In Dartell's current avatar on Twitter, it's a photo of Bugs Bunny saying, "I am who I am. Your approval isn't needed."  Then let me ask, why is her approval needed? It's a fact that you literally shrink your world if you hold prejudices for any type of group. You lessen your understanding about people and go by general bigoted mindsets. The KKK is a Christian organization. Do I really feel that they are behaving like real Christians? Again, The Westboro Baptist Church is a Christian ministry. But as she stated, "They're not Christian at all." But they are going by the historical standards of the bible. Is it hateful? It sure seems that way. Is burning a cross on your lawn seen as "hateful"? Sure does. So, before anyone asks me to read the Qur'an fully, I will request that they open up the bible and check out the many things listed which would seem unfair and criminal. As they say, you can't judge a book by its cover, but as I say, you can't judge someone by the historical events of their "good book".