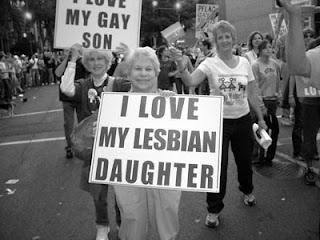 Paula took a deep breath and let out a pathetic Monday morning sigh as she hung up her coat in the employee closet. “I’ll just never understand why that girl chooses to live a harder life.” I remained quiet, sitting in my cubical overhearing pre-coffee mumblings of her complaints. It was 8:40 am, twenty minutes before we had to punch in. I always came in early so I could boot up my computer and prepare myself for a day of mayhem filled with an array of irate customers that would call in to bitch about a two cent increase on their phone bill. You had to mentally and physically prepare for this type of work. I heard Paula shuffling around her desk and rambling over on the other side of the tall wall that separated us. “Did I do this to her? I mean -what would make her become a lesbian at the age of seventeen?” I thought to myself: become a lesbian...hrmm. As if some lesbian fairy godmother came waltzing into her daughter’s bedroom wearing Birkenstocks and a dangling chain wallet, I doubt her daughter just “became” a lesbian out of the blue. Being that I was twenty-five at the time, already in a five year relationship with Madelene, I kept my mouth shut about my lifestyle for the most part. The only zinger was that I worked with people who I knew from school and outside the office. It was inevitable that ‘word’ got out somehow.

Thing is, Paula would talk loudly enough so that she could get people involved in her conversations. Usually, it was mostly gossip and union bullshit about how much she hated the company and wanted everyone to join her bandwagon. I never quite jumped into one of her rants until that very day. I picked up old invoices and pretended I needed to make copies. Paula was standing nearby, watching me and talking to a coworker even louder this time. As I accidentally pressed 50 copies, I was kinda grateful, because it gave me the opportunity to turn to her and say, “You know, when I came out of the closet at the age of nineteen, I didn’t just ‘become’ a lesbian - I knew I preferred women from a very early age.” She white knuckled her coffee mug and just stared at me in shock. She obviously didn’t know I was gay.
“You’re g-g-gay?”
“Yes, ma’am.”
“But, you look 'too girly' to be a lesbian.”
“We come in all types.” I said, shifting my business skirt a bit to the left.
“Why would you choose a harder life though?” she asked.
“That’s a good question. Why would I if I wasn’t truly a lesbian? I guess it would be a harder life if I lived a lie and cheated a great man out of ‘true love’, eventually leaving him one day for another woman. We would both be cheated out of a happy life.”

She quickly ran to her desk and grabbed her purse. She pulled out her wallet and showed me a photo of her daughter. From what I can see, she was beautiful. She had short stylish cropped hair, big blue eyes and a figure one would wish to keep after the age of thirty. Although she was beautiful in my eyes, her mother said, “She would be so much more prettier if she wore clothes that were meant for girls and grew her hair out.” I felt a twisting sensation in my stomach as I looked up at Paula, who was wearing an old suit from the eighties, wrinkled up so badly that it was obvious she had never invested in an iron. Her hair was burnt out from all the dye jobs and perms she had gotten that year, shoulder length and uneven. As she showed me another photo of her daughter, it was of her playing soccer.
“Does she drink or do drugs?” I asked.
“No, she’s an honor student and watches her health better than any of us in the family.”
“So your problem is?” I asked, smiling and letting her know in a subtle way how lucky she was to have an amazing daughter like this.
“I want a life for her. I want her to have a husband who provides and children. She can’t have children if she’s with a woman.”

As I corrected her about gays and lesbians not being able to have children, I also went on to ask what was more important: her daughter being a “kept housewife” with a husband and kids or a successful and healthy daughter who feels loved and accepted by her family regardless of who she picks as a mate? She quickly threw the ball back into my court.

“So How long have you and your partner been together?”
“Five years.” (Now it's 17 years later of course.)
“Does she look more like a man?” (Assuming there was a dynamic in our relationship.)
“Not at all.” I went into my purse over by my cubical and showed her a photo of the both of us. Frustrated as she was, she let out a cry, “But why? You two could have any man you want!”
Any. man. we. want...

This wasn’t even about religious beliefs or condemning her daughter for “sinning”. It was more about “living the right life” and being provided for. Paula worked her ass off in that office every single day, sometimes six days a week, providing for her family. She divorced her husband a few years back and now has a successful career. I then threw the ball back into her court: “Look at you, Paula. I’ve never seen such a hardworking woman in my life. You’re successful and you’re able to take care of all three of your children without anyone. You’re someone to be looked up to.” I said, smiling, placing my photo of Madelene and I back into my wallet and walking away, forgetting about the 50 copies I had left on the machine where we were talking. When 4:45 pm rolled around, I started getting my things together so I could fly out of the office. I then felt a hand on my shoulder. I turned around and Paula was standing next to the entrance of my cubical....with tears in her eyes.

That’s all she said.

For more of Deb's articles, please visit: www.debrapasquella.com or join her on Facebook and Twitter. Check out her cooking blog for some of her famous recipes!
Debra Pasquella gays and lesbians lesbian daughter LGBT