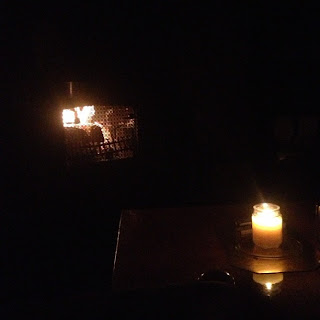 We're alive! Sandy blew in here with a vengeance leaving most of our area and surrounding cities devastated in some parts. It's odd, because the areas that were of complete destruction, a block down the road could be seen as untouched. It seemed as though Sandy cherry picked her victims and kept some without an ounce of damage or even an electrical outage. Lucky ducks. Our electric went out Monday afternoon. We expected it. I had just finished roasting a chicken and preparing for Sandy to leave us without power for days, even weeks. You know what I love though - everyone, including people I didn't even know, made fun of me for storing up on gallons and gallons of water and a shit load of canned soups of every kind. I went three days before the hurricane when people were all saying, "Oh it's not going to be anything. It's all media hype." I don't take chances with my family, especially having a dog now. I first went to the dollar store, bought tons of batteries, flashlights and get this----they had gallons of water. I took about 15 gallons. The line behind me were pissed off. Whatever. I let many customers go ahead of me as they chuckled at my amounts of water I had in my basket. Then I headed over to Shoprite to do some more shopping. I bought about 20 gallons of water and more canned goods. One girl walking down the aisle looked at my shopping cart and made a 'disgusted noise', like, "Ughhhh," and then rolled her eyes. Some said, "You're crazy, Deb!" Maybe I am, but during the electrical outage, we had water and food. We have a well, so when the electric goes out, we have ZERO water - not just cold water - none whatsoever. I filled all the tubs in the house and made sure we had a supply of baby wipes and everything you can possibly imagine to keep us sanitary. 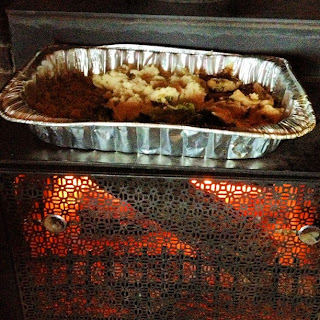 I have to say, I have never, ever been so scared in my life during a storm. We've been through high winds and even hurricanes before, but this storm was one that I thought I may not possibly make it out alive. The upstairs of our house sounded as though the roof was tearing apart. I sat downstairs with my wife, pacing around to determine 'where the best spot for us to go' if we should hear something smash into pieces, but luckily, it was more of a scare than anything. I had no clue what was going on in the world outside of my house. My iPhone had no capability of making calls or going online, even with the 3G shitty connection we have here. I had no access to anything except for text messaging. All those emergency apps they told me to download were absolutely useless. We went back in time --- an AM/FM radio and a landline telephone to rely on. We have a couple of fireplaces - one for ambience and heat, and the other is a wood burning stove. So we made our coffee and food on top of the stove. Worked perfectly. When the storm was over, we even used our BBQ outside. I am so grateful that was the worst of it. My neighbor on the other hand has all these huge old fir trees on his yard. One uprooted and fell onto his property, luckily not hitting his home. Our road is completely blocked with downed trees and power lines, so we're stuck inside but thank the Lord we have power again! I must have taken the longest shower in history.

Now for my anger rant. I cannot believe the insensitivity of people who were on Facebook posting jokes and slapping the east coast in the face with horrible comments. One person even mocked the fact that a 30 year old man got killed by a fallen tree. Not for nothing - get your facts straight before even assuming that the man was even outside. He was in his own home when the tree had fallen on his house, and sadly, killing him. I don't care how many hurricanes you have seen or how many 'earthquakes' you've been through, the fact remains that New Yorkers are not used to this weather - never have been. EMS rescue workers are not prepared as they are say in Florida or the islands and for earthquakes, California. Another person on Facebook was like, "HA! My house never lost electricity and the entire road was untouched! Oh yeah, this was a huge hurricane!" --- Get the hell outside of your house and look around your surrounding area instead of the tiny world around you. How can people be so insensitive when lives were lost (minimal thank God) and homes and businesses were destroyed? Airports are under water and NYC didn't fair too well either, leaving subways flooded out and some of mass transit out of service, Some people amaze me. The sad part is, the people I'm referring to are the ones that I had thought had some sort of heart. Maybe I'm making a big deal out of it, but when I see children and adults being killed, some trapped in their homes because they can't get out due to their towns being under water, I just want to slap the shit out of the people who make fun of natural disasters, or "media hype". I have a couple of words for them.

Thank you for all my readers and those who have personally emailed me asking how I was. I really appreciated that. I'm sorry I wasn't able to respond until this very moment. I wasn't even capable of using my Twitter account or anything online. But I will be updating my status and whereabouts on Twitter if you wish to follow me there. There is also a Twitter feed of mine on the right margin of this blog if you wish to check my status. I appreciate your concern and well thoughts. I hope everyone on the east coast are safe, warm and with loved ones. New Yorkers are survivors. We've been through many traumatic stuff, and we'll get through this one. God bless.

For more of Deb's articles, please visit: www.debrapasquella.com or join her on Facebook and Twitter.
at October 31, 2012