Have you ever walked into a room and felt tense, nervous and perhaps a tad self-conscious due to the energy you felt walking inside? They say (God knows who 'they' are), that bees and dogs can smell fear - they sense your energy right away. But I don't think it's just limited to bees and dogs. I truly believe that people can sense or pick up negative or positive energy regardless. Take for example, last night... Madelene and I ate dinner at our favorite restaurant. We usually sit at the bar and order some appetizers. We're friends with the owners and have known them for years. There was something not right in the air - something a bit 'off'. Their demeanors were down - almost as though they've been defeated in some way or another. It also trickled over into the employees. Our peppy little waitress (when we actually get a table) looked down in the dumps, even though she had her sparkly smile on for us. Her energy said, "I wanna go home! I hate this place!" Even the owners looked like they wanted to get the hell out of there. So as customers wanting to have a pleasant dining experience, it was quite hard to have a good time when your hosts are absolutely miserable. But that's just one example. 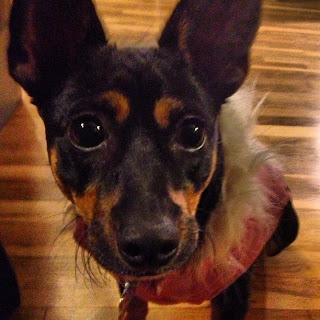 Not too long ago, my puppy was a little beast. Not for nothing, as cute as she is, Lola was bad bad bad!!! As all puppies can be. She bit, scratched, broke stuff, chewed everything and growled and barked at us. One day I said to Madelene, "She just hates me. I can feel it."  Mad insisted that she was just uptight due to her shots, but there was something unexplainable - her behavior was just so bizarre. My mother would get a kick out of Lola snarling and growling at me - even showing her teeth. Mom would laugh because Lola would come over to her with her ears down and tail wagging wanting some love from her Nanna. Her energy towards my mother was very different. I became more uptight and nervous around Lola. I didn't know if my big toe was going to be bitten off or if I was going to find broken glass all over the floor. I'd come in with this uptight energy that she sensed, and it was back to square one: barking and growling with the 'challenge stance' that dogs give when they feel intimidated. Madelene started getting the same response from Lola after a while since she was getting a bit frustrated with the behavior. Then one morning, I consciously decided that I was going to be calm and tranquil around her. No more loud, "NOOOO's" and "GET OFF THERE" --- I was going to simply place her little paws back on the floor whenever she jumped on the table and then reward her with a soothing voice and possibly a treat. 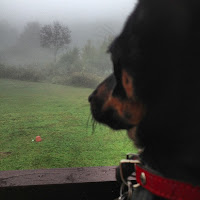 My soft energy created the same response she gives to my mother. Lola never barks or growls, unless there is someone or some animal outside. When she comes to me, her ears go down and her tail wags back and forth. She is silent and very submissive now. She became the most docile dog I have ever come across. Even when we brought her on vacation, we rewarded her for doing the right thing - not reprimanding her for doing the wrong thing - meaning - if she jumped on the table, we'd place her back down and then say, "Good girl!!!" And she immediately responds to the positive energy she gets for doing the right thing. (Or what we want her to do.) She gets startled if she's yelled at and then becomes defensive. I know some people think differently and that you're supposed to scream "NOOOOO" into their faces, but I guess my dog is different. She reacts and responds calmly with a calmer tone. And we're happy with that, and so is she. Energy is huge, especially for animals. They can pick up your tense emotions and they can also pick up whether or not you're sad. They sense it somehow.  I also think the high intensity of our emotions while my dad was gravely ill was another factor of why Lola was very tense as well. We were all worn out, stressed out, sad and even hopeless. All negative energy. She felt that, and I really believe she reacted to it. 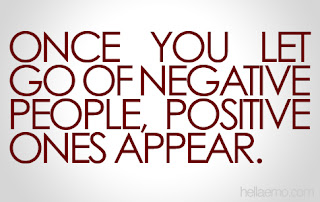 I've been learning quite a lot about the power of our emotions and how it can affect both you and those around you. I do believe that the energy you put forth will be the energy you will get back in return for the most part, (with humans and animals). Even if your problem has nothing to do with the person who you are spending time with, that person will pick up on your energy. My own mother knows whenever Madelene and I have an argument. I can try to act all "happy and normal", but she senses something's wrong.  And it doesn't have to be people who are close to you either. I tend to steer clear from negative or toxic people who are always answering you back abruptly, just because they're having a 'bad day'. Take your crap somewhere else. I'm not in the mood to get sucked into your web. Don't forget, people's negative energies can definitely rub off on you if they're constantly miserable. It's okay to be negative from time to time -- we're all human -- but when does it come to the point of avoiding certain people at all costs due to their high levels of negativity? You can't help someone if they don't want to help themselves. Even when you try to be positive or try to do the 'right thing' - they'll always see it as an agenda or some sort of motive to do something bad to them - a self-defense mechanism perhaps, but one that I want to just stay far away from.  Life is too short to allow negative and toxic people into your life. And sadly, that may even go for some family members as well. You can only do the best you can.

What kind of energy are you putting forth today?

For more of Deb's articles, please visit www.debrapasquella.com or join her on Facebook and Twitter.
at October 24, 2012