Should Sex Ed Include Homosexuality? 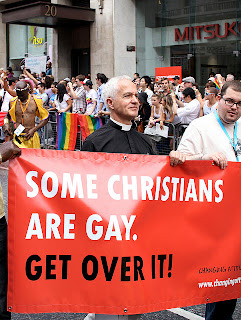 Where do we learn tolerance for people who may be different than us? You can even post the question a little differently: where do we learn prejudices from? While society may be a factor, it also stems from what a child learns from home, or even what the child is hidden from. Kids are smart and eventually, they come to terms with Santa Claus being a fraud, the Tooth Fairy's a character played by mom and of course, the Easter bunny is just a fib. But those are 'good' lies; to enhance the child's wonderment. I do believe that. But what do you say to a child who sees two men holding hands or two women in a loving embrace like mommy and daddy do?  That's a hard call, but eventually they find out by their friends in school, which is just as scary as amateur sex ed. As society progresses into a new world of tolerance and equality for all (thank God), the old world of prejudices still lurks out there, waiting to offend anyone who dares fit the mold of the ~unknown~. At my Dad's funeral, I had an old friend come up to me and say, "Oh wait, aren't your parents Catholic or Christian or something? What did you convert to, since you know, you're gay and all?" I told her I was Christian and she looked shocked and appalled. "They don't accept you!" I wasn't going to get into a religious/gay & lesbian debate, so I just told her that people have different beliefs, and that's okay. She then went on and asked if she remembered what her parents said about being gay and how it's a sin. I just walked away from it. I didn't mention my Christian pastor marrying us in the name of God. Probably wouldn't have gone very well.

My point is, she referred back to her parents' teaching of how "wrong" it is to be gay. She also said as I was walking away from her, "Oh you know the old schoolers, Deb," but I simply kept walking and greeting people. I remember when I was five years old and hearing the word "lesbian" for the first time. I looked at my mom and asked, "What's a lesbian?" She gave me a wide-eyed look and stuttered out, "It's a-a-a-girl who, umm, kisses other g-g-g-girls." And my response was, "Oh." I remember pondering about it (knowing I preferred girls) and thinking, "Wow, it's possible!"  Just the other day while having an early family dinner, my adorable little nephew who's only ten years old asked, "Aunt Debbie, is Madelene your best friend?"  I looked up and said, "She certainly is!"  He looked back down at his dish and said, "Oh cool." I have no business responding, "She's my wife", when that answer would have been interrogated quickly. I'm just very happy he posed the question as he did, instead of asking, "Who is Madelene to you?"  Then it would be my business to say, "She's my wife" and have "the aunt" explain how to homosexuals can live together like mommy and daddy. "What's a homosexual?" I could only imagine it would have taken the most difficult route. 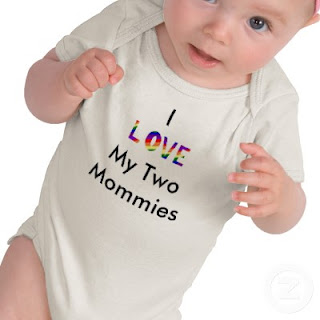 It's not right or wrong to not tell your kid about homosexuality if they don't need to know or they're not discovering at that early age that 'something's different' here.  To me, it's all about preference. But when does it come to the point of hiding homosexuality in fear that your child may be 'too' inquisitive, self-analyzing their own paths?  If you're able to have "the talk" with your child, do you include homosexuality in there as well? Or is that an 'alternative lifestyle' still? I actually have no opinion on it myself and still questioning it. I feel at times that when kids get a bit older, homosexuality could just be a 'fad' and explored like a drug instead of going with their own little hearts. They're so innocent and impressionable. It's a hard call to make especially if a kid asks about your relationship status with your wife or husband if you're gay. In my opinion, it's not my business to educate them on something that the parent should, or shouldn't. That's their call. I just hope if the parent does hide that lifestyle altogether, that they won't grow up thinking it's "wrong" or "sinful".  Two dear friends of mine who are a married gay couple recently had a baby girl. More and more gay parents are emerging into society. Soon enough, there will be no more explaining about, "Mommy & Mommy" or "Daddy & Daddy" --- it'll just be the norm.  We can only hope.