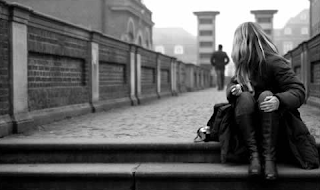 If I can give any advice at all, it would be to learn from my mistakes, as I certainly have. In any form of relationship, be it platonic or romantic, arguments can get out of control. I can only take so much, until I pop my cork. I’m known to say it like it is - to the point where it’s so blunt, that it’s hurtful sometimes. Self-defense is no excuse when giving in to an intense argument where it comes to low blows and personal insults. I’ve learned a lot though. I learned that when someone blows up at you for whatever reason, or hurts you verbally, it’s best to just walk away and say nothing at all. Silence is the best communicator. The person who is trying to fight with you has nobody to fight with. When you ‘give it back to them’ -- that’s exactly what they want. For instance, if someone is hurting you with the most personal insults of your character, or perhaps bringing up things you’ve done in the past to torture you in some twisted way -- they want you to do the same to them. They’re fishing for things you don’t like about them. They want to hear it. It’s a 'bring it on' type of mindset. If you don’t respond to it at all, you’ve won the game while they’re still sitting there left with their vile insults lingering in the air because you haven’t absorbed it to the fullest extent. By “fullest extent”, I mean in retaliation-mode.

When in a romantic dispute or a really bad breakup, the best thing to do (as I’ve learned) is to not respond to it at all. Now that Facebook and Twitter has all the means to really get your ex’s goat - is it really a good idea? Think about it: the more the ex takes the time out to badmouth you in any online forum, the more they are hurting over the relationship. I remember this happening a long time ago, where I saw my ex write the most awful and hurtful things about me. Every sentence, every word she typed was "Deb, Deb, Deb". It went on for a couple of years as we had no contact whatsoever. So what does that say about the situation? Who’s over who, and who's “fishing” for retaliation in any shape or form? My point is, when you respond to any insult, accusation, or just in an argument plain and simple - you are giving them ammunition, satisfaction -realization of what you truly think of them. It’s a psychological mind game. But when you walk away or don’t respond, you’ve left them in their own dust as well as possibly saving the friendship or relationship by not saying what you truly think. I’ve made plenty of mistakes of retaliating and it usually ended up with the same results: the insults that were volleyed back and forth were way too much to ever mend the friendship or relationship back together. Whether trying to salvage the relationship or to end it, sometimes, it’s just best to walk away.

"Silence is a source of great strength." ~Lao Tzu