Why Did You Decide to Become a Lesbian? 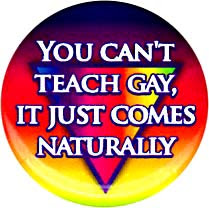 Yesterday morning as I was checking my email, I came across an old friend from high school who befriended me on Facebook. We batted a few emails back and forth, and with the last email she had sent me, she asked, “Why did you decide to become a lesbian?” At first, I wanted to respond quickly, swiftly, and of course without thinking. I then paused and wondered if this woman had any type of exposure to any of the LGBT community, or at least knew someone who was gay or lesbian. She was brought up in a very rigid Catholic household. That in itself tells me where this bizarre question came from. She’s also raising her new family with her husband the same way. Nothing wrong with that. So I sat and thought about it, and instead of flat out saying, “Are you serious”, with a sarcastic slap in the face, I decided to slap her in the face with a joke she can either think is serious or not. I replied with, “Well, I thought I’d get more guys that way.” I was wondering how serious she would have taken that or if she would have laughed and said, “Oh stop being silly”, but she shocked me and said, “Deb, you could meet so many nice men that would love to be with you...” She went on to compliment me in different ways (making me feel bad about my “choice”) and then went on to tell me about my chosen sin.

Whenever I get a friend request from an old friend who may not know I’m a lesbian, I cringe. The whole, “So are you married” question always pops up and of course, they all trek into your photo albums to get a gist of what’s happening in your life. When my friend saw my wedding photos, she said, “How is that possible?” Of course, I told her that gay marriage was legal in a few states, and hey, in our own as well. It’s amazing how sheltered some people are as far as knowing what’s going on in the world. It’s also amazing how she chose to phrase her sentence: “Why did you decide to be a lesbian?” In a way she’s right. I did decide to “be” a lesbian, only due to falling in love with my partner, and now wife. I could have chosen to marry a man and have kids, but that wouldn’t be fair for him. That man deserves a wife who is going to love him like a man, as a husband and as the father of her children. I didn’t want to live a lie. I chose this path because it felt natural, despite the religious claims that being a homosexual is unnatural. Further emails had other questions like, “When did you know you liked girls” - and honestly, I knew I leaned more toward females since I was in diapers. So why did I become a lesbian? I guess I’ll happily blame that on my best friend, my wife.

For more of Deb's articles, please visit: www.debrapasquella.com
at September 21, 2011

Email ThisBlogThis!Share to TwitterShare to FacebookShare to Pinterest
Labels: being gay is not a choice, Debra Pasquella, gay and lesbian, is being gay a choice, LGBT
Newer Post Older Post Home