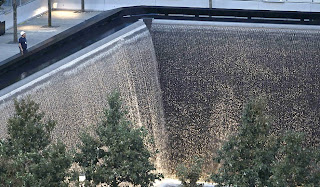 Have we grieved enough, New York? Is it out of our systems or do we have to keep going on until one day, our own name is written on a plaque...or tombstone? Ten years gone by and it still feels as though it happened yesterday. In my honest and strong-minded opinion, many people are recreating the disaster, more so than just a visit to their resting place. Most survivors of 9/11 have PTSD. Some have been in therapy for ten years, and others keep it in recreating that day over and over inside their minds. On Sunday morning, I turned on the TV to notice every single local channel dedicating it to the 9/11 memorial. It’s nice to see that. But some channels decided to display those awful images and footage of what took place a decade ago. They kept showing the plane going through the second tower over and over again. They also played clips of people falling - jumping out of windows. Enough! Each time I see those images, my stomach starts to hurt and I get a huge lump in my throat. It’s just too much, even after ten years. Why focus on the tragedy instead of just the memorial services?

To take it a bit further, how many times would you want to go to your loved one’s funeral? Think about it. If you’ve ever lost a loved one (family member, husband, wife, child, brother or sister), how many times can you endure another funeral service for them? Haven’t you said your peace? Haven’t you cried enough? In fact, not too many people know this, but I have a huge fear of wakes and funeral services. I guess many people do, but my fear is not only dreading a loss of a loved one, but dreading the fact that I WILL pass out, as I’ve done in the past. For me, it’s just too much to handle. But I have to do it. Why do it ten more times? I think it should be a personal choice whether or not you want to visit your loved one’s resting place. I don’t believe the 9/11 memorial services are helping people who are suffering from PTSD. It really just makes things worse. “Never Forget” - No, how can we? We wouldn’t forget regardless of the memorials, but to do this every single year on the exact date and time? It’s just too much.

The site where they built the memorial is absolutely stunningly beautiful. What a wonderful tribute and remembrance New York has given to us. But, let us go when we’re able to. Let us go on our own personal time. Let us go...when we’re ready. I don’t believe anyone who has lost a loved one on 9/11 will ever forget, especially on that date. I decided to remain silent about it on my social networking sites. I've seen many people changing their profile pictures to a nice photo of the buildings with a dove, or candle, etc., and then I saw someone who placed a photo up of the buildings burning. Why? Is it to instill fear and grief? Can’t we just have time to heal without seeing the images of a building in a plume of smoke? Think about this: at a normal memorial site, for instance, a little visual on the corner of the road where “Johnny” got killed in a car accident. The only photos will be of him. It won’t be a photo of his smashed car or a footage of his accident. It won’t be a photo of him lying on the street. It’s the memory of Johnny - not the tragedy. I guess that doesn’t compare to a terrorist attack though. I can see one year, two years, even three years holding the memorial services, but ten years? It’s just too much.