The Other Side of Crazy 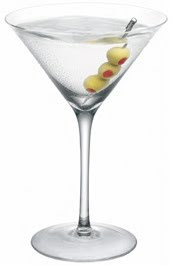 In one of my previous posts, I was talking about a book I’m now reading called, Anxiety Free by Robert L. Leahy, Ph.D., and within a few pages, I found myself getting more anxiety as they spoke about the long-term effects of anxiety: heart disease, stroke, aneurysms and so on and so on. Anyone with anxiety disorder certainly doesn’t want to hear about those side effects. In fact, most people with anxiety disorder always looks at the side effects of each medication they take - even if it’s just Tylenol. We fear any chemical that’ll possibly harm us, yet we reach for the very thing that may just destroy some of us for relief: alcohol. It’s a total contradiction to rely on alcohol and sedatives and be afraid of medications such as antidepressants, right? For me, I’m against antidepressants because their side effects are more alarming than the actual “good effects” of the meds. Have you ever seen one of their commercials for depression? There is a speaker that spews out 1,294.533.732 different side effects, and yes, death is one of them. I mean - “heart attacks, strokes, thoughts of suicide and death” is something to really think about. Give me a drink and call it a night.

Getting back to the book, Anxiety Free, I kept reading on. It gives another perspective to different lifestyles, different time pieces of how long people have been suffering with anxiety and panic disorder. In fact, since the beginning of time, anxiety has been a huge factor for many people. The author of the book sets up a scenario where he talks to “Stone Age Stanley” and realizes that there isn’t much different than what some of us go through on a daily basis today. 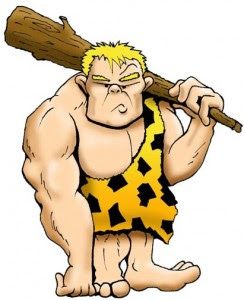 “Hey, Stanley, I’m Bob--and I’m new around here. Do you have some time to talk?”

“Well, I wanted to find out a little about you.”

“Have I done something wrong? I thought I put the fire out last week--did something burn down? I try to be careful, but I can never be sure.”

“No Stanley, I wanted to find out about what your life is like.”

“My life? Well, first, I can’t sleep. Up all night. Worrying about the tigers and wolves in the forest. They tell me it’s safe around here, but I’ve heard stories that would make your hair stand on end.”

“So you have insomnia?”

“Not all the time. But it really drives me nuts. I can’t sleep--I keep telling myself, Stanley, get some sleep! you’ll be good for nothing if you don’t get some sleep.”

“Dangerous. Be careful on the bridge. I don’t know what klutz strung that thing up, but you could fall with one false step. And then try to get a doctor!”

“So, you’re afraid of heights?”

"Hey, you’d have to be an idiot not to be afraid of heights. They can kill you. And, if it’s not the falling that kills you, it’s the drowning. Last month a couple of guys who thought they were macho took some wood they strung together. They tried to float it to get to the other island. They drowned. I warned them. But, no--they thought they knew it all.”

The dialogue goes on more, but I’ll spare you. Basically this stone age guy is freaked out over everything. He also goes onto say that he’s afraid of food poisoning, getting sick, his wife and kids leaving and he fears going to certain places (agoraphobia). So, basically in the book, it describes a portion where this anxiety thing is nothing new. But why is it so prevalent in today’s society? Why are there more medications available -- or better yet -- pushed? Each time I get a consultation with a psychiatrist or social worker, they insist on pairing up my therapy with medication. I always ask, “If you’re good with cognitive behavioral therapy, then why would you have to pair me up with medication?" It doesn’t make sense to me. One should be used before the other. The natural way should always be tried before reaching for the chemically altered one. But therapists try to push push push and I always say no no no. When they get persistent I ask, “How much of a kickback are you getting from this one?” Or I’ll just ask for another brand name and then they get all panicky themselves, which only means one thing: LESS MONEY. 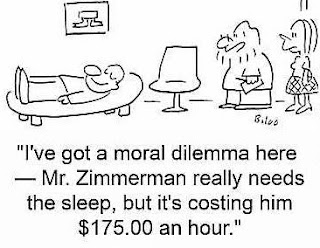 Since my insurance doesn’t cover much of that side of the medical field, they tend to not want to take me in. They say, “Oh we’re booked,” or as one doctor said, “We can work on a sliding scale basis, how’s $260 an hour for you?” ....Really? I mean, granted our mental and physical health is very important, but how important is it to doctors?
On February 4th, a reader who went under “anonymous” left me a comment about this topic on this previous post called, “Sliding Scale”.

“I came across your blog because I am a psychiatrist setting up a nonprofit psychiatric center and I am trying to answer the question with my board of directors of exactly how to set the sliding scale. While I appreciate your feelings about the mental health care providers having the power over the sliding scale, I have to tell you that we are just people many of us with student loan debt over $100,000USD. Psychiatry is very poorly reimbursed by insurance companies that is why most of us have no office staff unless we run medication check mills. Insurance companies trying to make health care a for profit endeavor when they are not providing any actual health care or benefits to patients is the problem. Doctors, nurses, and therapists, and patients are not the problem.”

While I sympathize with this doctor’s dilemma, I also have to wonder that if they lowered their rates on psychotherapy, then wouldn’t it be beneficial that people can actually afford it, therefore bringing in more patients? The more patients you have, the more money it will cover the loss of what the insurance doesn’t want to pay them. Doesn’t that make more sense? There are so many people out there, like myself, who need this type of help. There are people worse off than I am who don’t go, because they can’t afford it and can’t find a doctor to accept them. They have to go to these pill pushing idiots who rush them in for ten minutes and then kick them out with a script in hand. There is no compassion in this field whatsoever and it’s alarming to find more and more doctors getting the thousand yard stare. I went to a social worker/therapist who doesn’t prescribe scripts, yet this woman was so nasty and I want to even say, very insulting, that I got up from her couch and asked her where the hell she got her degree. She just stared at me with this blank ‘I don’t give a rat’s ass about you’ look and said, “I see that you’re angry. Why is that?” So if she’s going to be that stupid, I’m just going to seek out self-help books and try this on my own. Of course, the prescription of a Ketel One martini is definitely in order.
For more of Deb's articles, please visit: www.debrapasquella.com
anxiety disorder cognitive behavior therapy Debra Pasquella depression medication sliding scales thousand yard stare