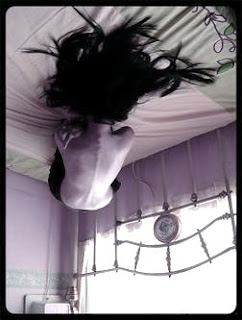 There are fierce demons lurking inside all of us. As humans, we're familiar with their names: love, hate, passion, lust, emotional and physical pain as well as the aches of self-loathing. From time to time, these demons may rear their ugly heads and make us literally insane. Whatever the triggers are, we must acknowledge that it’s temporary. ...Or is it? There’s a fine line between love and hate. There are cases where you love someone so much, but when they constantly hurt and torture you, (either emotionally or physically) those feelings of love can turn into hate. On the flipside, you can detest somebody so much that you end up falling completely in love with them. It’s an oddity, but nevertheless, it’s out there. In cases such as a divorce or breakup, you can find yourself omitting factitious behaviors to deter your ex from finding out the underlying truth of your real feelings: complete love. This is always the case: the brain says no, no, no, but the heart says yes yes yes! It’s a never-ending battle. The brain usually wins out because nobody wants to look like a fool or get jaded again.
It makes sense.

When we set our brain on ‘I’m not in love anymore’ mode, because the relationship seemed to be unhealthy-- do we set ourselves up for heartbreak over and over and over again? Who and what determines if the turnout will be positive or negative? How do you know if you don’t take the risk---from past experience? I have to say that past experiences gives us lessons learned, but my question is: if we learned the lessons, can’t we start over on a new foot making it better the next time around with the person we truly love? Or, does fear play the goalie and block your heart from entering the nets? It’s a familiar story for so many, but so personal on so many levels.

Where and when do we draw the line?

A close friend (leaving names out) gave me permission to tell me his story. He comes from a well-known wealthy family who has a good reputation in the community. He started dating a girl whom he fell madly in love with. The relationship was wonderful for a whole year, until it turned into complete chaos and turmoil. The relationship had to end because they fought continuously. They realized they had different set of values; different childhood upbringings that made their directions in life clash. Nobody was right or wrong, however, he still is in love with her and she’s still very much in love with him. He told his family all about her ‘psychotic episodes’ where she threw things at him, yelled at him for minuscule things and showed her emotional unstableness because of her jealousy and anger outbursts. How many times have we called our exes psychos? I bet all of us have. “We’re” always right, especially in the eyes of our family and friends. So now, the fear of telling his family and friends that he wants to reconnect and try again with his ex has him trying to forget her at the same time. He is too scared to initiate another attempt, due to other people’s knowledge (or too much knowledge) of their relationship that went sour.

Does he go with his heart and try again with the one woman he is so in love with? Or does he follow what his brain says; the past experience knowledge of ‘this may happen again’, as well as the two cents worth of advice provided by the peanut gallery? If two people are willing to work things out, seek couple counseling and get help because they’re so in love with one another----isn’t that worth it alone? I wrote about my friend before and he’s going to tap in to see the comments. I hope this helps. I just feel so sad that these two incredible people with so much in common had to split due to misunderstandings and miscommunications as well as interferences from the outside world – which had a great impact on their relationship alone.

The thought of going on forever in life loving someone that you had to let go must be a chronic aching pain inside anyone’s heart.

Wouldn't you agree?
Or is letting somebody go the true meaning of love?
breakups divorce heartbreak love relationships