Tripping Out of the Closet 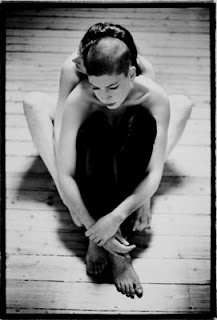 As a child growing up into the beginning of my teen years, I found myself being attracted to my girlfriends more than I should have been. It wasn’t normal. I kept it a secret for a long time, not saying a word to anyone. If one of my crushes started dating a boy, my heart broke. It was absolute torture having crushes that could never be revealed. I stood on the sidelines waiting for those short-term teenaged relationships to end. It always did. I bided my time, and when my friend needed someone to cry to, I was always more than willing to pick up the pieces. I wanted to be the one they dated. I didn’t only want to be “the friend” that they turned to; I wanted to be their girlfriend…their partner.
My mother says she always knew, but I don’t think she had a clue back then. There was one particular day after school when she caught me “playing house” with a girlfriend of mine. She walked in on the “husband and wife” kissing. I always played the husband and my friend always played the wife. We weren’t doing anything wrong because it wasn’t real- or so we thought. I was eight years old at the time. We saw people kissing on T.V. and wondered what it was all about. “Don’t you do that,” my mother would yell, as she walked into the room and back out quickly. We would scatter apart and my friend would have to leave soon thereafter. My mom and my friend’s mother would have discussions over the phone on what had just taken place, which eventually separated my friend and I from ever “playing” again. I was embarrassed for years over that incident and became very reticent about any of my true personal feelings.

While attending high school, I dated boys. I did it because my friends did. I didn’t want to look like the odd duck out. We all went on double dates and all had boyfriends to attend parties with. Meanwhile, my crushes still kept on with my straight girlfriends- even if they didn’t have a clue about me. Sometimes an innocent innuendo would slip out of my mouth, or a bluntly flirtatious remark would somehow make it from just a thought into audible words, followed by a, “just kidding” remark. We all made lesbian jokes. Even at parties, one of my best friends would always sit on my lap while we played drinking games at the table. I would become completely aroused, eventually forgetting how to play the game altogether. This happened all too frequently. All the flirting and “innocent kisses and hugs” that my friend displayed drove me insane. I never knew if she did it because everyone else did, or if she really secretly liked me. Some kisses were prolonged and right on the lips. I didn’t know what to make of this.

Back then it wasn’t even “trendy” to be bi-sexual or to be a lesbian as it is today. It was more seen as ‘the girl just couldn’t get a boyfriend, so she settled for another girl to date’. Pathetic. I hated that theory more than anything. I had many boyfriends and went out on many dates, so that theory went right out the window. This was different. I was different. I was gay. I am gay. At the age of nineteen, I couldn’t hold it in any longer. I was so sick of playing the straight role, trying to appease my family and friends. At the time, I was dating this really nice guy named John. He was half Italian and half Japanese. “Oh how nice it would be if you had his baby, Debbie,” my mother would say, as she stared out the window at John helping my father barbeque, “He’d make a great husband. He cooks as well as makes a lot of money.” He was a hibachi chef in a local Japanese restaurant. Not only was a he a great cook, but he was also great looking.

Eventually, I had to end my relationship with John, giving him the respect and courtesy to move on with another woman, who could be true to him and love him, as he deserved to be. It wasn’t fair to him and I wasn’t being fair to myself either. He was hurt, begging me not to leave him, but I would have hurt him more by staying with him. It just wouldn’t have been right. The thought and concept of marrying John was a wonderful picture, however I am the type of person who needs to be in love with the person I’m with, and not in love with the idea of having a husband and children. He deserved better than that. We never spoke after we parted.
I could have went the “straight road” and appeased mom and dad, get married, have a few kids, etc., etc., etc., but would I ever have been happy? Religious people would say that I’m serving the desires of my flesh. What is that? Doesn’t everyone want to love and be loved? I never understood that. I didn’t want to be middle-aged having some midlife crisis coming out of the closet. It would have been another, ‘oh it’s just a phase’ kind of thing from the people around me.

I’ve come to realize that no matter who you’re with, what orientation you are or if and when you’re in or out of the closet: is there such a thing as “complete happiness” to begin with? I know now that in order to be “content” is to be happy with yourself first. I admit, it took me all these years to figure that one out. And I’m still learning.

...as I go on and on.
coming out gay and lesbians LGBT relationships