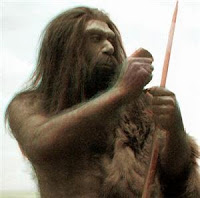 A very good blogger friend who goes by Neers, brought up an interesting thought: are we all selfish from the result of being human?
She writes, ”… it IS indeed about people and not a subset of people ... it used to baffle me, how people kill/rape other people (doesn’t it even HURT to see someone on the screen being hurt??) and then i reached theory -- everyone is a part of god, but then, since there are lots n lots of us (mankind) ... god got divided into so many parts ... now if it was just any of his other creations ... it would have been easier .. like animals, who only prey on what is necessary ... to maintain the food chain, balance ... but the chemicals inside the things called human brains ... makes him prey, esp when it's un-necessary (there are some in number of lines, I have on that) and hence, the mankind has lost the specialty of being a man ... a favored child... 1. Because there are just too many of the original good thing. 2. And also because we let ourselves believe that everything else (the nature around, which bears the brunt or the care silently, because it cannot communicate in our language) was created for us.... and then slowly, we become selfish... we don’t even think about ourselves... we think that we DO... but really... do we??”

She speaks about chemicals inside human beings that cause us to prey on mankind; our own in order to survive to whatever extent that may be. Psychiatrists will insist on a chemical imbalance, but is it really? Maybe the people without chemical imbalances just have a higher spiritual consciousness of God, instead of just having balanced out levels of neurotransmitters floating in and out of their receptors that make them “normal” or “sane”---whatever that means. We then throw in a mixture of chemicals called, Prozac, Lithium or some other kind of mood stabilizer in order to contain our animalistic instincts to run wild and free.

Is it mental illness vs. spiritual illness? If scientific evidence is contradictory to spirituality and faith-driven beliefs-- then what about mental illness? Isn’t that related to scientific evidence and discovery that one’s mind is chemically imbalanced? Some religions would say that the person needs an exorcism; that demons somehow entered their body and they’re in need of a “spiritual cleansing” of some sort. Maybe I’ve watched way too many documentaries on Taboo, however there are many countries who still do the exorcisms and cast out those evil demons, when in fact, it just may be a case of schizophrenia or bi-polar outburst. Who’s to say what’s what? Is it real? Is it mentally and chemically induced? Or, are there actual demons that slip inside of all of us from time to time making us seemingly crazy? You have to wonder. 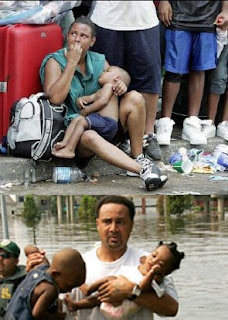 We’d like to appear giving, compassionate, generous and loving to all, but when it comes down to the final last crumb on the floor where you have to feed your family and yourself or it’s a matter of life or death---which will you choose? Look what happens when there’s a catastrophe like the one that Hurricane Katrina brought into New Orleans.
Our primal instincts come right out of the woodwork because we’re just that: human----------animals------------scared-----------competitive.
It’s you or him in polluted waters reaching for that last bottle of formula for your newborn baby. Which will you choose? Your baby or his? We all become "crazy" when faced with a catastrophic event. Sometimes, and this is also planned, the government will cover up a foreseen tragedies to come or a terrorist attack not to cause “panic” for the public. Panic can drive people crazy and out of their minds.

Are we selfish? Or is it just our make up?
catastrophe psychology spirituality