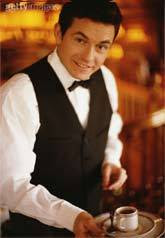 It’s no secret that I’m a huge fan of Waiter Rant. His writing is excellent, as well as his stories about serving famished customers. I’ve always had questions regarding what it’s like to be a waiter or waitress. What do they think of certain customers? How do they feel when food is given back to the chef, because it wasn’t to their liking? Are they pretending to be nice, in hopes for a huge tip at the end of their guest’s meal?

I’ve bartended in the past, which is kind of similar to waiting tables, yet, you’re behind a bar serving people who are very thirsty. Serving food was a part of my job as well. People would come and sit at the bar and have their lunch or dinner, along with their cocktails. A lot of people question the tip etiquette, when eating their meal at the bar. Do they tip the full 20%, even if they’re at the bar? Or do they leave the typical $1 for every drink they have?

In my experience, I have received the

typical dollar for every drink—even if their meal was included. (This excludes the drunken men who were after something other than the ten beers they just guzzled--I would get a generous tip from them.) Sometimes, people would leave a huge tip by mistake, because they were too drunk to realize that they broke a $50 dollar bill for a $5 dollar drink. At that time, it was much too late to run down the street yelling, “Wait! You left me too much!” I was bound to the bar, unless I had to go to the restroom, which required me to look for someone to cover the bar while I was gone. It wasn’t easy.

As a customer eating at the bar and having cocktails, I always tip the full 20% and over if the service was good. I don’t care. It’s hard work back there and a lot of people think that bartending is just serving drinks. There’s a whole lot that goes on back there, other than just mixing a few cocktails. You have your wait staff demanding drinks for their tables, you have your beer guzzlers slamming down their bottles at the end of the bar, indicating they're ready for another hit, and then you have your hungry customers being finicky with their food, ordering complicated dishes and substituting everything under the sun. Keeping up with tabs and the shifting of seats is another challenge. You have to keep up with who’s who and who’s paying cash, as well as who’s keeping a large tab. It’s key to keep an eye on those who have had way too much to drink. It’s like a table of 20—but worse.

Back when I was single, I would go on dates and monitor how they would treat the wait staff. If they were rude and demanding, I would base that on how they would treat me in life. I’d figured if they were upset over the food that was given to them, and not appreciative, then I would get that back in return if I were cooking for them one day. If they complained about the pricing of a meal, I would then imagine they’d be cheap and stingy with their money on other matters in life. If you take someone to a nice restaurant, it’s so important to have enough money to cover for the specials for the both of you, which are usually $25 dollars and over. Don’t forget about the drinks in a nice restaurant, which usually rounds off to about $10 dollars per cocktail. Do the math before taking somebody out to a nice establishment. Never leave a stingy tip if you plan on returning to that restaurant. They’ll remember you…believe me.

Getting back to Waiter Rant---this is why I love him so much. He offers great sound advice for people who aren’t aware of how important it is to have dining and tipping etiquette. I read him almost daily. He has a very large readership and sometimes, due to his popularity, he gets a lot of flack for his content, or lack of thereof. When he’s away, people complain and start leaving nasty remarks. He’s writing a book now, which requires a lot of time away from his blog. His comments have been less than pleasant, due to people being unhappy about his lack of writing. He recently had a post up about personalized Waiter Rant mugs. He was selling them for $10.99 per mug. People started calling him a sellout and whining about how they liked him better when he was blogging daily. I bought a couple for a few reasons. For one, he’s one of my favorite reads. Secondly, I have taken some of his advice and it has worked like a charm- so I’m thankful to him. And lastly, I love to support fellow writers who are looking to pursue a career in what they love doing best…sharing themselves with the world.