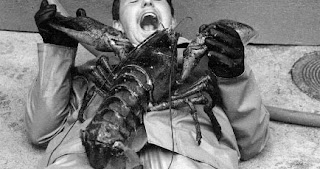 “Here, gimme dat’, will ya?” Dad took the lobster out of my hand and started cutting through the midsection of its body. “Disiz’ howya’ do it,” he said, with an accomplished look, “You gotta cut right inda’ middle.” He was trying his best to show me how he cuts open a lobster, but I just wasn’t getting it. I didn’t want to get it, even though I wanted to help him. He used to come home everyday from the South Street Seaport in Manhattan with a crate of lobsters that were still alive. I remember poking at one, as it tried clawing me while being tied up with an orange rubber band. They’ve always reminded me of huge crickets- ugly with big antennas everywhere. Worse yet, my sister would always call them sea roaches. I never enjoyed eating them. I was afraid that one day, my father would be attacked by one of these giant sea roaches just by the way he killed them. It’s been said that lobsters love their family, just as humans do, and feel emotional pain.

Being that dad worked at the fish market, we would have different types of fish every week. I’ve always preferred yellowtail or salmon. Shellfish was too salty for me, however I loved clams and mussels and still do. As I grew older into my early twenties, I started developing allergic reactions whenever I ate shrimp, lobster or crab. I never had a reaction while eating clams, oysters or mussels though. “It’s all in her head, she’s not having a reaction from the shrimp,” my mom said, looking at my sister for approval, “it’s anxiety, that’s all!” I turned to my mother, opened my mouth, and showed her the many blisters that were developing. Some were popping, and others had blood oozing out of them. It was gross.

“That’s not a reaction?” I cried out, seeking help. My girlfriend called the hospital. They wouldn’t give her any advice, other than to give me Benedryl or to send me to the emergency room right away. Till this day, my mom still tries to feed me shellfish; it just doesn’t sink in with her. I’ll remind her, and she’ll just shake her head. I can read her mind- “It’s all in her head.” 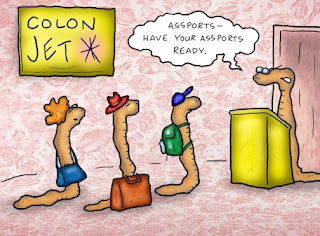 The other day, my father calls me and says, “Turn on dis’ channel and watch whachoo’ eat at dat’ Japanese sushi bar!” He knows very well how much I love sushi, but also knows I don’t touch shrimp, lobster or crab. I turned it on, and it was about extreme stories from people who have developed tapeworms just from eating sushi alone. One man got a tapeworm that literally went right through him when he finally made it to the bathroom. He screamed to his wife, “Help me! Oh my GAWD- what is this?” Half the tapeworm was hanging out of him. “Get a scissor!” He called out to his wife. She came in, and with one snip, it cut in half, and it retracted right back into his rectum. This thing was huge. Apparently, it was taking up most of his intestines, eating whatever the man ate. He got medical attention right away. They gave him antibiotics, which killed the worm. They said that you have to get the head in order to kill it. You can chop a tapeworm into a million little pieces, yet it will still be alive in separate pieces!

This story still hasn’t deterred me from eating at my favorite sushi bar though. I always remind my father that the man on TV was in a foreign country eating raw fish from a brook. That’s not exactly what I call a reputable sushi bar. Everyone tries to get me to stop eating sushi. They tell me horrorific stories, or worse yet, they tell me exaggerated tall tales, in order to get me to quit cold turkey.

There’s something beautiful about the way the Japanese culture eats. Everything is fresh and pure. Even their vegetables are usually raw, with ingredients such as seaweed, ginger, and other things that are so good for your health and immune system. Maybe that’s why they live so long? To me, sushi is the purest form you can eat it in. It’s not cooked, burning off most of its protein, and you can taste the real flavor of your food. I’m not going to turn vegan or anything, but it’s just fascinating how clean and pure the Japanese like to eat their food.

Another wonderful Japanese theory is, when you’re sick, you’re supposed to eat protein (steak or fish or anything that’s high in protein) and chase it down with beer or alcohol. They prefer beer for some reason. Not sure why- maybe it has something to do with the barley...who knows? As soon as you notice a cold coming on, or if you feel under the weather, they suggest eating “Atkin’s style” with a healthy dose of alcohol. I’m telling you, this culture’s the best.

Although my father will never quite understand why I'll never touch lobster again, he can’t stand to see me eat sushi. The toughest man I know, my dad, squirms when he sees me enjoying a nice raw piece of fish- yet it doesn’t bother him to rip open a lobster straight down the middle of its torso, still kicking it’s legs and antennas screaming for help.

Which is worse?
Enjoy your weekend everyone and thanks so much for your encouraging words these past few days. I appreciate your feedback!
fish Japanese lobster raw fish sushi tapeworm