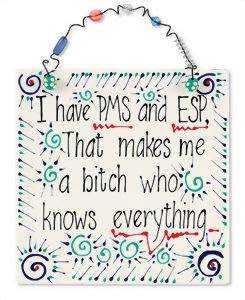 It’s there. Lurking behind the door, sneering at me through the cracks of the walls, echoing down the long corridors, calling my name, whispering the threat of something all too familiar.

Last night I made the oddest combo of food. I sautéed garlic, onions, mushrooms, fresh parsley and basil into olive oil with a splash of white wine and lemon. In the other pan, I fried up chicken liver in olive oil. I mixed the two together into a beautiful dish. A garden salad full of spinach, beans, onions and tomatoes as well as smoked salmon rolled up with cream cheese, capers and red onions on top of tomatoes. The mixture was weird, but it totally calmed down my cravings for salt, iron and greens.

I wonder if men go through similar symptoms? Do you guys crave weird things? Do you ever have moments of outbursts or a fit of depression at certain times of the month? I know our anatomies are different, but we all have hormones and different fluctuations of them, depending how our chemistry is. Estrogen will just drive you up a wall– but does testosterone do similar things? I’ve always wondered about that. The thing I’ve noticed we all have in common during my PMSing times is that I’m horny and I’m craving red meat like a man. But seriously, do men get depressed and act manic at certain points in their lives? And don’t even go there with the midlife crisis theory. I think we all go through that once we feel we’re getting too old to be looked at as ‘a catch’. We feel unattractive, and so we compensate by buying a beautiful sport’s car or something that’ll make us look younger. That’s totally different.

Here’s something I’ve always wondered about. What about gay men? They seem more emotional and sensitive towards things the typical masculine heterosexual wouldn’t. Now, some will debate that it’s not a gene that makes a person homosexual. But then tell me how some gay men can completely act, talk and hold themselves better than most women? How do you explain the behavior of Nathan Lane when he played the part of Albert Goldman in the movie, “Birdcage”? There are so many men that act like women, who walk like women, who think like women and who have the emotional wackiness like women. So, my question is, how is it NOT a gene? Being homosexual has to be genetic.

What about a family who has mostly gays & lesbians? Of course there's heterosexuals in the mix, but I know of a particular family who are mostly gay. Did all of them “choose” to be gay? I mean, the thought of “choosing” to be gay is ridiculous in my opinion. Who wants to live a harder lifestyle? Who wants to go through the process of ‘coming out’ to your family members? The possibility of them disowning you is great. Society is still iffy about being ‘gay friendly’ at their establishments. A heterosexual couple holding hands across the dining table is seen as ‘sweet’ and ‘loving’. But if they see a homosexual couple doing the same, it sort of holds a different meaning all together. Some people would think perversion. Others would think, “Oh, she’s such a pretty girl – she could get any man she wants. Why?” I’ve had someone say that to me once, and I honestly didn’t know how to respond to that. I know their intentions were sincere, but their ignorance showed right through. Okay, so this lady called me ‘pretty’ and that I could get any man (she was quite generous with that compliment!)-- but she’s also saying that I’m settling for less, just because my preference is to be with another woman. I see where the compliment lies, but I also see the double-edged sword of this old fashioned way of thinking or their close-mindedness.

So then, are we merely humans loving other people we fall for? Or do we choose to pick the opposite gender because we’re told to do so? Do people really feel that we prefer to “choose” a harder lifestyle?

Between all the hormones that go throughout our bodies, I think we have a lot in common. Genetics, hormones and chemistry have a lot to do with the way we act, feel and how we love. Our hearts only know the true meaning of it all. But our chemistry make up and the fluctuations of it all make us quite similar – hetero or homo. Some people will say that acting upon those emotions (gearing towards homosexuality) is what makes it a sin- or “unnatural”. But are we denying ourselves out of love when we don’t act upon our emotions?

My body craves red meat or liver when I’m PMSing. It craves iron – which is a vitamin we all need. It craves salt, sugar and protein, which is essential to our diet in moderation. So does that mean I shouldn’t act upon what I feel my body needs?
Birdcage genetics homosexuality hormones PMS