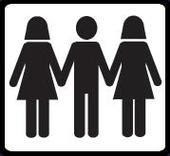 As most of you probably already know, I love to pick people’s brains. I love to know what they’re thinking and what makes them tick. I especially pick the brains of people I already know- or think I know at least. The most fascinating thing to me is, people are so unique and so different from one another. They think differently, react differently and want and need different things in life. When we stereotype certain ‘men’, we think of a sport’s fanatic, beer drinking muscular (or not) kind of guy. He’s got a pack of wolves he calls ‘friends’ and basically howls at any Sue, Jen or Jane. Okay, that’s a bit extreme, but let’s focus on those types for a minute.

There’s this one guy, who’s name I won’t mention, that constantly plants the idea of including himself in my girlfriend's and my relationship. He’s the bartender of a local pub in the area. Now, granted my girlfriend and I flirt and give each other googly eyes at the bar, but never anything risqué or inappropriate, but it’s totally obvious we’re a couple. We’re very friendly with him and tolerate whatever innuendoes come flying across the bar along with our beers.

Since I’ve experienced the task of being a bartender myself, I know that it’s important to make your customers feel as though they’re number one. Yes, I admit it- I flirted with my barstool warmers. They took care of me. The majority of my money was made through tips. Sure, I would give a nice friendly smile and some bedroom eyes while treating them every third drink, but it paid off. Don’t think men don’t do this either! This bartender flirted big time, so I played the game. I, as the customer flirted back. Why? To get free drinks. So the flirting can be finagled at both ends of the spectrum. And what better way to flirt with a guy who’s bartending at a straight pub while he’s looking over at two lesbians in need of some liquid medication? Perfect, or is it? It got a bit complicated as he ran outside after us giving us his phone number. “Come to my house and watch the game with me!” I’d only do that with The Boys at the Jammy! Totally faithful to those guys!

Think about this… What if I was straight and I walked into the same pub with a good-looking man at my side? That bartender would have never hit on me. Now, another question is this- and maybe my straight male readers can help me… Say if a man sees two lesbians (who he know for sure are together) walk into a bar or restaurant. The two of them are cozy in a corner talking and having a few cocktails. What makes them decide that it’s “okay” to approach them or buy them a drink? He would never do this if it was a male/female couple, but for some reason, he feels less intimidated by a female couple. Do you think it’s out of disrespect? Or do you think that most men feel that two women together aren’t as serious as a heterosexual couple?

If a man bought a woman a drink while she was with her boyfriend or husband, that would be totally disrespectful, right? Seeing a lesbian couple, you then have the possible scenario of a man trying to get one of the girls to jump on the other side of the fence. He feels that somehow, he has this magnificent power to make them straight after she’s been with him. “Well after you’ve been with me, you won’t want another woman again.” I’ve heard that so many times. I even took a man up on that once...or twice. It failed. I tried. Nothing. Nada. I’m still a dyke!

I’m not trying to implicate that I’m a manhater of any sort. I’m just trying to reason with men who have this type of mentality. Is it out of conceit? Or is it the whole ‘man should be with woman’ type of thinking---the Tarzan one brain cell concept? My opinions may be coming off very strong right now, but I’ve been hit with very strong ‘suggestions’ and ‘innuendos’ to the point of no return. Sometimes I feel like saying, “Get over yourself!” But other times, I play into ‘the game’ and make the guy feel what it’s like to be played with. Is it disrespectful? Maybe. A tit for tat? Possibly. Is it right? Probably not. But, I will say that it makes me perturbed when I see some buffoon trying to ‘get in’ on a very loving relationship. And that’s where the misconception of promiscuity and homosexuality comes in. Do they think we’re promiscuous just because we’re lesbians?
alcohol homosexuality lesbians promiscuous