A Slip and Fall That Leads Into Bad Dancing 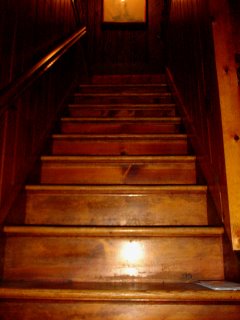 Have you ever felt you’ve been hit with the bad luck streak? I’m not talking gambling-wise; I’m talking about the ‘can’t stay up on my own two feet’ type of bad luck? It’s almost as if you’re hitting puberty and your body is just way too big for your brain to function it properly.

Well I had a little incident. Okay, well sort of a big incident. Well, more like an accident. I was on the phone with a buddy of mine while I was throwing back a few beers. I realized Madelene had just arrived home from work. I hung up the phone and quickly ran downstairs to prepare dinner. Now it was a pretty warm day out, so I was wearing my platform flip-flops. Yeah yeah, go ahead, call me white trash if you’d like—but they’re comfortable and well…they make me look a helluva lot taller.

Joyfully skipping down the stairs, I notice one flip-flop slid off my foot and down went Deb---right on her back. To imagine what the sound effects, I will copy Mike with this one.

On the floor lying on my back, my scream wasn’t audible. It just wouldn’t come out. It’s like a baby before it cries; you first get that lip-synced version of a scream…and then, ”WAAAAAAAAAA!” They start wailing at the top of their lungs. Well so did I.

“Sweetie! What happened! Oh my God! Are you okay?” Madelene says, as she runs down the stairs almost falling on top of me. This could have been a two dyke pile up. Luckily she wasn’t drinking yet, or I would have definitely invited that.

Pressed against an ice pack for the rest of the evening, I felt my right side of my back blow up like a balloon. I thought I busted my liver. (I think I did that a long time ago with all the alcohol consumption.) There I was googling every single fricken organ that is located on the right side: Liver & kidney. Great. Just when I thought I drowned my liver years ago, I literally punched it fifteen times by thuggidy thuggidy thumpin’ down the steps. Was God trying to tell me something? Maybe.

Picture it…New York, 2006, a warm sultry night was in store for us. My girlfriend and I were off to meet our friends Alyssa and Sue from the band, "September Dogs" to have dinner with them, as well as see them play at a nearby bar in the city. This was great. I was psyched.

7:15pm
Madelene (my girlfriend) and I waited at the bar for them. We ordered two Ketel One martinis extra dry straight up—three olives. Mmm. A martini before dinner always wets your appetite. I see them walk through the door. We had a great dinner and then headed off to location #2…the watering hole. 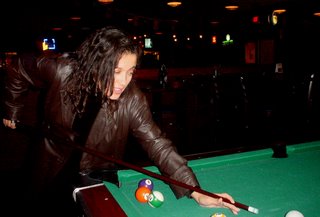 Can someone say, “Cut her off now please?” I was drinking beers like they had a leak in their taps. Madelene and I shot some pool and played some air hockey. Fun fun fun! Nothing like a little kiddy game to getchya’ started.

12:00pm
Shot after shot…beer after beer…I was in a 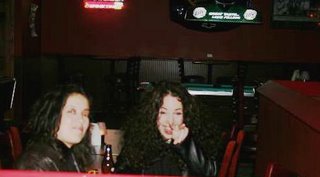 drunken stupor. I felt myself getting numb and feeling fuzzy. I knew I was done. After my ‘fourth beer threshold’, there is no sexual drive whatsoever. I know, I know, lucky gal Madelene is, huh? I’m like an impotent man after the fourth. Really.

1:30am
“Like oh…my GAWD! I love this song! Oh you gotta dance with me!” I said to Madelene, as though “Sweet Home Alabama” was the number one club song in New York. I believe they even mixed it with “Werewolves of London” too. Really good mix they did.

There I was, kicking my feet in the air, dancing like Elaine from Seinfeld--making a complete ass of myself. I didn’t care. I was happy, I was drunk, and I was dancing with a bunch of twenty year old perky boobed girlies. Does it get any better than this?

2:00am
What’s that? A strobe light? Cool!.......NO you idiot! It’s a camera being shot a million times pointing in my direction! Great. Now this is going to be all over God’s creation on the net. Is the net God’s creation? I have no clue. Manmade right? I believe? What would the atheists believe?

4:30am
Ah well, anyway, it was time to take Deb’s drunk ass home and call it a night…err….a morning. We got inside the house and my sweetie pushed me up the stairs. I didn’t want to have another ‘incident’ like I did the night before and ruin my liver again. But wait…I think I ruined it anyway.

Let me just tell you about the next day. I had DTs. No lie. I had convulsions from drinking so much, that I thought I was going to die. My legs, arms and whole body was shaking. My voice trembled as though I was 90 yrs old. This was a huge red flag for me. No---seriously, not kidding around. I am drying out right now and still kind of recovering.

Although I had a fantastic time with the gang—I promise to never, ever drink again. I am officially back on the wagon.

Anyone know when happy hour is?