When Your Soul Wounds Ends Up Hurting Others

A couple of therapists had told me, "But you don't look like the type who suffers with anxiety or even social anxiety. You look 'put together.'" That's actually the worst thing you can tell a patient. There are many smiles, many laughs and generous hearts who are walking around with wounded souls. A while back when I was working for this phone company, we had a monthly seminar/team meeting that would spark the fire again and keep us motivated. The manager who directed the meeting was always happy, always smiling and constantly encouraging us to be inspired, and look at challenges in a new light. I always wondered how she stayed so uber positive all the time. It was almost sickening. One morning while I was watching her 'cheer us on,' smiling and laughing throughout the meeting, I drifted off into a daydream and envisioned her having a complete mental breakdown. I don't know why I was thinking that because I would never wish that for anyone. But the fact was: I was seeing one side. There's always another side. Not even 4 months later, she took a leave of absence. She had a mental breakdown at work and needed time off. She never returned. 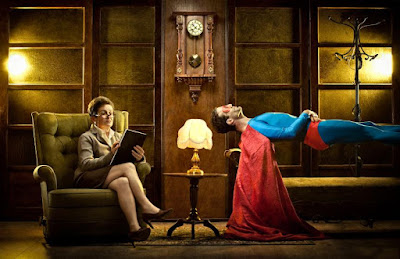 So many of us try to 'hold it together' and be 'the responsible one'----the one with broad shoulders to help anyone who needs them. And while that's incredibly noble and generous of them, oftentimes, the one person they neglect is themselves. Many aren't willing to show their vulnerability. In their minds, it's looked at as "weak," when in fact, it's actually the strongest thing you can do. So many therapists feel like they have to hold it together, but they continually are holding others up. I know quite a few therapists who have opened up to me, explaining that they had a psychiatrist too, and took medication for their anxiety and depression. I actually thought that was incredibly brave of them to tell me that. I saw them in a different light. I saw them as human. Like, "Wow, they know from experience what I am going through." I didn't think it was unprofessional of them to tell me, I thought it was brave and made it more "safe" for me to open up to them. I never once felt judged. 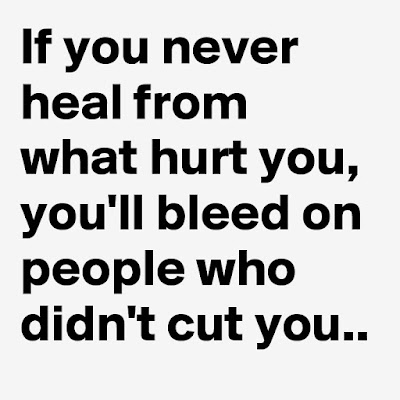 Sometimes it can get complicated being friends with someone who has deep soul wounds. Now put that together with two people who have deep soul wounds. There's only two ways this can turn out: it can be helpful and therapeutic, or it can turn into a game of 'who can hurt the other hurt person first.' Every single person (even the ones you think have the perfect life) has a wounded soul on some level. Ever hear of the quote, "Hurt people hurt people?" If you're not careful enough, you can end up on either side of the hurt stick: either you're the one hurting the person because you feel such emotional pain, or the other one is hurting you because of their emotional pain. There's a theory called, "painbody" by Eckhart Tolle.

"It is an accumulation of painful life experience that was not fully faced and accepted in the moment it arose. It leaves behind an energy form of emotional pain. It comes together with other energy forms from other instances, and so after some years you have a “painbody,” an energy entity consisting of old emotion."---Eckhart Tolle

For instance, have you ever stubbed your toe really bad, or have gotten physically hurt in some way that didn't really drum up a whole lot of pain, but it was enough to bring on the tear works? One day, I remember I fell outside in my driveway. I hurt my knee and started crying....way too longer than I had to. Then it hit me: I wasn't crying for my physical pain, I was crying over my mom being sick and possibly dying in the months ahead. During this time, I was hard to deal with. I became volatile and felt offended all the time. I constantly argued with everyone and became bitter. I wasn't a normally bitter person, but this angered me. It angered me that God was about to take my mom! And when somebody else has the same emotional pain, it's not a good combination to be around them. I became less reactive after my mom's death. I wasn't offended by much anymore. I learned so much from seeing both my parents get sick and die from cancer. It became a soul wound that I continually carry. Every year, from June 22nd till July 21st---I can become reactive if you poke me enough times. It's a very emotional time for me. Those dates signify so much pain and hurt that I literally isolate myself from the world. This year, during that time, I ended up losing a friend who also had a difficult time during these dates. Her soul wound hurt my soul wound, and I ended up extinguishing our friendship. I felt like I was getting jabs and underlining insults from someone who wasn't happy herself. Like, hey---join the club! We can either help one another out, or fight it out. I found her insults to be from a place of pain. I had shared something personal with her, to which she used it as an opportunity to hurt me with. I actually grin and beard it a lot of the times. She's done this quite often in the past. I sensed she was upset over something and usually ignore it. But this time, it was the anniversary of my mother's death and I couldn't stay silent any longer. 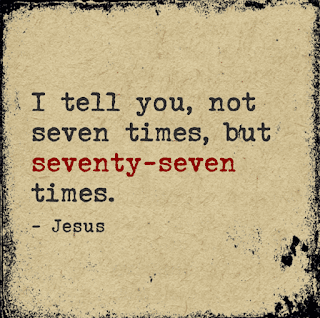 Words have power. You can either use them to edify and lift someone's spirits up, or you can decide to tear somebody down with them. And we also have to be careful, because sometimes, those words will stick, to where it's at the point of no return. You can forgive and forget, but you don't necessarily have to reconcile. When you know this is someone's true nature, and that their soul wound will always bring out that other bitter side, there's no going back. They'll do it again and again and again and again, unless they become new creatures in Christ. I do believe with all my heart that people can change once they accept God into their hearts. In Matthew, Jesus says that church members should forgive each other “seventy times seven times” (18:22), a number that symbolizes boundlessness. However, even though he preaches boundless forgiveness, he does not indicate whether that forgiveness has conditions. When you experience God's forgiveness, you become more forgiving to other people, who are extensions of God. It also clearly states in the Bible that if you hate any one of God's children, then you are murderers.

In John 3:15 it states, "Anyone who hates a brother or sister is a murderer, and you know that no murderer has eternal life residing in him."

The greatest commandment that Jesus gave to us was to love God with all your heart and all your mind, and to love everyone else the same.

We are extensions of God. So when we hurt other people, we also hurt God. If we do not forgive one another, then God won't forgive us either.

The next time you overreact in anger and hurt someone, try to think about what was going on inside of you emotionally. What other things were you either sad or angry about? If you were stewing over something in your time of anger, then maybe reconciling is ok. But if you were only hurt due to the words of another hurt individual, then maybe it's time to forgive and just move on. I do believe that in some cases, patterns cannot be broken, especially if they aren't bringing their issues to God. I truly believe ALL things are possible with God. We all make mistakes, Christian or not---we all fall short. But isn't it nice to know that we have God who comforts and restores us---who forgives us completely without ever having to bring it up again? I wish more people were like that. We can be.

For more of Deb's articles, please visit: www.debrapasquella.com or join her on Facebook and Twitter. Check out her cooking blog for some of her famous recipes!
at July 05, 2019