When the Truth Comes Out 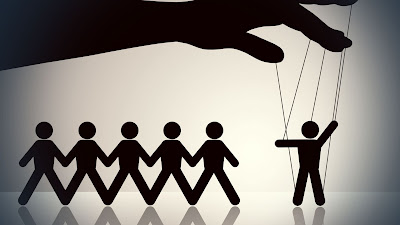 Nobody has control over you. After years of fearing other people's judgements about who I am, what I do and who I'm with, I finally came to realize that -- hey -- I'm an adult! I couldn't give a rat's culo if you disagree with my life choices. Sometimes even the people who are closest to you have this false illusion that they can steer your life's rudder. Let them make suggestions, let them throw their two cents in, or even outright judge you, but the one thing they can't do is change your life according to their will. I read somewhere that whenever you see someone who needs power and control, and will not stop until they get it, you are actually seeing someone who is deeply afraid of life. Fearful people need to have things their way. If they don't, they experience high levels of anxiety and usually have some sort of meltdown.

Trust me, I'm no psychiatrist, but I do know that there are people out there who are just absolutely damaged for whatever reason. In some aspects, we've all been damaged, hurt or betrayed in our lifetimes. But when someone doesn't handle it the proper way, or lets it out in a healthy way, they feel out of control. So what happens is, since their life is out of control, they will attempt to control yours. They will also control how others see you, but remember, people will always find out the truth. You don't even have to say one thing to defend yourself -- the truth comes out in the wash. Sincere and genuine people will judge you based on their experience alone, not based upon how someone else sees you.

For example, years ago I dated this girl who had a sister that was just a year younger than she was. She always said how she never did anything with her life, and that she was basically a "bum" because she didn't have a "real job." She never left the house so she assumed she lacked motivation. She said her sister would do odd jobs or sell things on eBay making jewelry and selling old vintage clothing. A "real job" in my ex's eyes was was very conventional and rigid: office work or breaking your back in some sort of blue collar type of job. My ex was a proud senior editor over at NYU. She made a decent amount of money and always talked about her career to everyone. She basically placed all of her identity onto what she did for a living. About a year after our breakup, I was out having dinner at a local bar and grill and happened to sees my ex's sister hanging out over at the other end of the bar. I went to go say hi.

Turns out, her sister wasn't just twiddling her thumbs at home as once thought. Her sister made an office inside of her home, properly zoned for business. Sure, she sold some things on eBay, but her main source of income was being a psychologist and and family therapist! She went to school and studied psychology, got her degree and became a licensed psychologist making great money and having the ability to work from home. So I asked her when did she start her new career and she said, "Start? I've been doing this for over eight years now! You didn't know that?" I didn't know what to say. I was always under the assumption that her sister had some sort of issue where she couldn't work or just didn't want to go out. But the reality was, her sister was an amazing and well known psychologist and only did the eBay on the side for extra money and for a hobby. In addition, she would also do pro bono type of work for those who could not afford therapy, and even volunteered her time in women's shelters. In addition, she also adopts and fosters senior dogs who need homes as well as volunteers her time over at the animal shelter on the weekends. I mean, could this girl do anymore AWESOME things in this world?

Here's where it gets even better... (Ok, maybe that's the evil part speaking.)

I had asked her if her sister was still working as an editor over at NYU. She looked at me strange and then told me that her sister (my ex) was not an editor --- ever --- anywhere. She was a stripper in an "upscale" club over in the next state from us during the day, which explained why she got implants and had a lot of work done. Nonetheless, she made a killing at this place because this club was an "all nude" type of facility, which did not serve any alcohol. Many things in that club were not umm, legit. I'll just leave it at that. On TOP of that, she never received a diploma, (I don't think a diploma makes or breaks a person anyway) but she made herself out to be the most successful person, but with the exception of trampling over her sister's reputation for being a good for nuttin' bum.

Do you see the madness in that? Because she was out of control with her own life, and felt shame for what she did, she basically put herself ABOVE her own sister's success and trashed her on the side as if she did nothing at all.

Let me just say this... People can talk all day long about you. Realize that it's not about you. Your life has no impact on theirs. Some people claim to be the "hero" in your life, when in fact, they're never even there when you need them the most. These people are trying to control their own reputation in this world while flinging mud at yours. This is definitely a type of control. When a person cannot control your life, they will in fact, try to control your reputation and make people see you through their eyes -- or should I say, through their lies.

As I always say, silence is your best weapon. Let people find the real you by finding out the real truth.

I truly didn't mean to rhyme in this post!!! OK, now go out and have a fantastic weekend!!!

For more of Deb's articles, please visit: www.debrapasquella.com or join her on Facebook and Twitter. Check out her cooking blog for some of her famous recipes!
at June 09, 2017