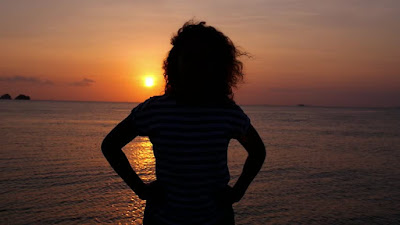 In the midst of all this political chaos and divisiveness, I found myself becoming angry. I'm not sure what stirred up my anger, whether it was a contagious wave of political egomania, or if it was an underlining tinge of fear. I do believe whether you are on the right or left of the political arena, fear is the common denominator which ultimately divides us. We don't want our rights taken away. There are different set of rights on each side. From my standpoint, my first love is God, after that, the safety of our country, the 2nd amendment, pro-life, and many other views that lean mostly conservative. But then I have my social values. I'm an advocate for the gay, lesbian and transgender communities. I believe in marriage equality. I also believe in freedom of religion, whereas if a baker doesn't want to participate in my wedding, then I would respect their views and find another baker to help us. I try to understand each side, because even though many Christians believe that homosexuality is a sin, I do not. I've written and broadcasted about my views, biblical references to prove that it is not a sin, and to prove that everything we do is ultimately "sinful" in the bible. "Throw the first stone" comes to mind, and no one can toss one at anybody. With that being said, if another Christian believes that being gay is a sin to God, then ok -- don't be gay. What I don't agree with is bashing the LGBT for loving who they love in the name of God. If you think we're sinning, then pray for us. Isn't your God strong enough to fix us? But...we're not broken.

As Trump made his way into the White House, there were several protests going on. One of them was called "The Queer Dance Party." It was held in front of Mike Pence's home. I've always felt that if you protest half naked, simulating sexual behavior in public to fight for your rights, that society and the government officials will never take the LGBT community seriously. I've stated many times that this sort of protesters don't represent what my wife and I stand for. I guess you could say I made it about me. Through the array of different and unique people, I recently found myself guilty of judging another person. It wasn't Jesus-like at all, yet I use that line to conservative Christians who judge me.

I took to Facebook and posted a photo of Firas Nasr, the Queer Dance Organizer.

I said in jest, "And this is how we beg for our rights." 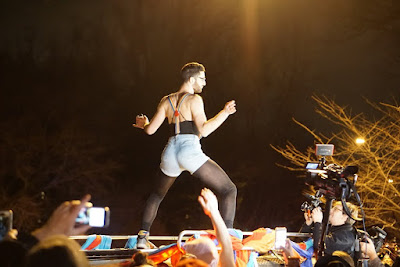 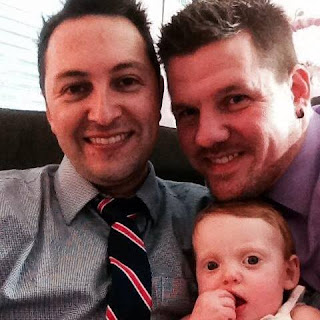 Many people made their comments, chuckling and making cute remarks. Many saying they wish they had his figure and dance moves, which was cute. But then an old friend of mine made a comment. My old friend named, Dave. He was the one I went to the prom with. We shared something very interesting: we were both gay. He never knew I was gay, and I never knew he was gay. We had the best circle of friends and always respected one another. We even kept in touch throughout the years, even if it was a Facebook "hello." He married is longtime partner and adopted a beautiful baby girl named, Leah. See, in my head, when fighting for our rights, especially to marry and have children, these two gentlemen and their adorable baby girl are the ones I would love to see in the front of the protest. It would show that being gay isn't all about "sex" and "lust," but of love, loyalty and family.

He said it to imply that I was basically saying it myself. Maybe this was the last straw that broke the camel's back, but for whatever reason, I just went off on him on my post, even reprimanding him for using the derogatory word to imply I was mocking this man. But...I was mocking him in a way.

Although I have no excuse to do this, the point I was trying to make was is that this man dancing did not represent what I stand for. My old friend Dave and his family are the people I want to represent me. But is that fair? This guy dancing, Firas Nasr was fighting for my rights! Who am I to say anything when all I'm doing is making some outlandish remarks on social media? I'm not out there fighting with them and I'm not even supporting what he's so brave to do. I figured, well I write books and articles and broadcast for the LGBT community, which is a huge contribution in itself, but maybe it's not enough.

I want to publicly apologize to my old friend Dave for my behavior. I want to also apologize to his husband Tim, and the rest of our mutual friends who were in that thread. This isn't who I am, and I'm not sure why I couldn't just keep my thoughts to myself. Maybe this is a learning curve for me. I'm still a work in progress here. I was trying so hard to insinuate that Dave and his family are the types of people I would love to see protesting for our rights, but it doesn't matter who, it matters why anyone is out there fighting for us. I dismissed the conversation like a coward and blocked my friends, to which I'm very regretful for. I hope that they can one day accept my apology, and if not, then this will definitely be a lesson learned.

I also want to sincerely apologize to Firas Nasr. To be brave enough to go out into that sh*tstorm of political madness and fight for me? THANK YOU. And I'm so sorry.

Even though my political and religious views may be different, it's a beautiful thing when people can act like adults and still treat each other with respect, which I failed to do. I didn't even realize what I was doing, until the next morning. Somehow, somewhere, I've become hard, my heart used to be softer. I preach about tolerance and acceptance, while not displaying any of it. I'm thankful for Tim, Dave's husband for pointing that out to me. He personally emailed me, and of course, I immediately got offended, when he was absolutely right.

Dave, I love you and I cherish every fun memory we've had together. You're a huge part of my childhood and helped me in so many ways. And even if we don't talk for months or years and we see one another after some time, it's as if time never slipped by. You were like a brother to me and I still feel that way. My apologies go out to you and Tim, with all my heart. And oh, please also forgive me for the big 90's feathered back hair!

For more of Deb's articles, please visit: www.debrapasquella.com or join her on Facebook and Twitter. Check out her cooking blog for some of her famous recipes!
acceptance lgbtqia love is love love pence political fights politics protests queer dance social media Trump