Hypochondria: The Girl Who Cried Wolf 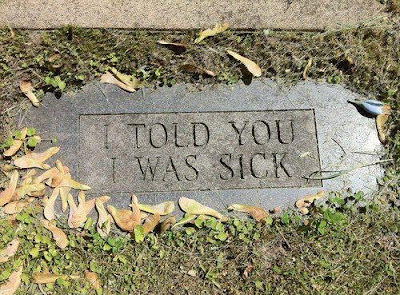 This year I have taken two large breaks from writing. Back in November I had my hysterectomy that left me foggy for a few months and this past week, I came down with a terrible flu which I'm still recovering from. I'm better, but because of my underlining asthma, the after effects of the bronchitis leaves me hacking up a lung still. Thank God for the prescription cough meds at night or I wouldn't sleep at all. I can see how people get addicted to this crap. I never had such great sleep in my life. Little by little, I've been trying to do more, or at least slowly slide back into my routine again. As soon as I think I'm ok -- I get knocked out by exhaustion and curl up into the fetal position with a mountain of tissues & a few puffs of my inhaler. It definitely hasn't been fun at all. With two trips to the ER to receive breathing treatments and a ton of albuterol and steroids 'to go' -- I should have more energy than my chihuahua. 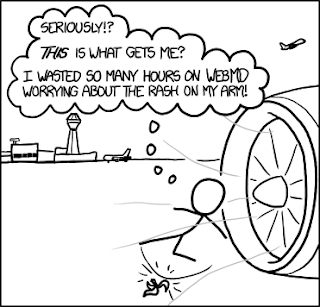 There's no doubt that I'm definitely a hypochondriac. There's also no doubt that I truly do have ailments, such as asthma to complicate flus and colds as well as stomach issues that require gastroenterologist visits and a ton of antacids to make it through the day. But there is an element of hypochondria that seems to disrupt my life. For instance, ever since I was 16 years old, I've been having "heart attack scares". I mean, come on -- what 16 year old has a heart attack unless they have an underlining condition? But maybe I had that "underlining condition"? I thought that maybe I was one of the rare ones with these heart issues. My panic attacks started at the age 16 which mimics a heart attack. So for as long as I can remember, any time my heart would race, palpitate or skip a beat, it meant a hospital visit just to make sure things were kosher. And then of course, a simple chest pain from muscle strain or discomfort from my asthma would send me into a frenzy thinking it was my heart once again. Thank God we didn't have the internet back then or I would've been on WebMD a long time ago. 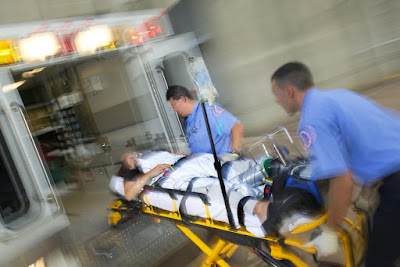 I'm not sure if it got better or worse as I grew older, or if it just remained the same. At the age of 25, I remember listening to my gynecologist tell me that I should take birth control pills to control my menstraul cramps. On the label (because hypochondriacs read labels like a lawyer reading a contract) -- it said, "Risk of stroke or heart attack 35 years or older." So the age "35" meant that I was at risk all. the. time. -- regardless if I was taking them or not. I never did take the pills in fear of that risk. I still have moments when I see a red mark on my leg or if one leg appears to be swollen, I want to rule out a blood clot. The thought of a blood clot scares the shit out of me. Just the idea of a blood clot breaking off and traveling up into the lungs to kill you is something so unforeseen and never really thought about until you're gasping for air dialing 911.

Which then begs to ask the big question: why am I so afraid to die? 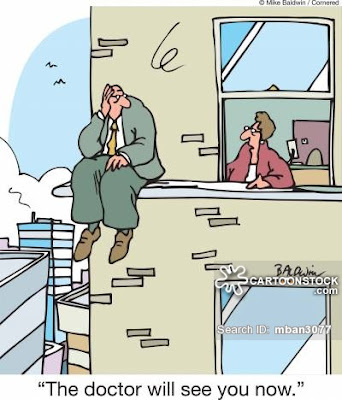 Nobody makes it out of here alive anyway. Why should I keep on trying to "save myself" just to make it last 20 years longer? I believe in God and I do believe there is an afterlife, but the "what ifs" still make me wonder as a human being. And as contradictory as this may seem, as much as I beg to live by being such a hypochondriac, I sometimes think about ending my own life due to the torture of being so neurotic. No worries -- I'm too much of a coward to do such a thing anyway. They say it's braver to stay here and live, but when you put a gun to someone's head, what do they do? They beg to live. My basic survival instincts are all screwed up. A heart attack or blood clot doesn't know any age or weight. "Oh lose weight so you don't get heart disease or a blood clot." My uncle was a runner at the age of 30. He ate right, never smoked and bam -- a heart attack hit him out of nowhere. I hear about more thin people having blood clots (DVTs or PEs) than I do with overweight folks. Interesting, right? I've also heard, "You'll never see an old fat person." That's because when you get older, you naturally eat less and your body shrinks. My dad used to be close to 400 lbs. He died at more than half of his body weight due to an illness that had nothing to do with being overweight. Smoking killed him. He was 75. Cancer is a nondiscriminatory illness.

I'm sharing this with you so that maybe you'll understand your friend, your sister, your brother or child a bit more when they freak out about a lump on their neck (possibly from a swollen lymph node) or when they say they have chest pain (after they ate two huge bowls of pasta fasule). And yes, it's "all in our head" -- but we feel the symptoms, the pain, the agony of disrupting our day (as well as yours) to go to the doctor and get it checked out. Sometimes that means waking up in the middle of the night so the hypochondriac can have peace of mind. Although it's very real to us, it can also be very frustrating and agonizing for loved ones. I'm not saying to enable the madness of the neurosis, but to refrain from making them feel bad or "crazy' -- to minimize their fears and concerns over their wellbeing and overall health. 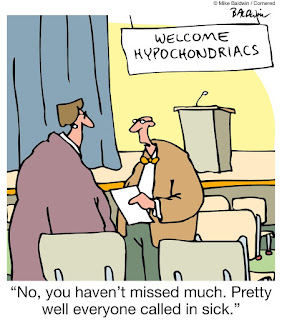 My entire point of this post is about compassion. Years ago when I was in my late teens, I developed what's called agoraphobia. It's basically a fear of walking into marketplaces or large venues with crowds. But the definition has changed just a little. It now means a fear of just going outside of your home. I still get it from time to time, but it's much more managed. But going back to my late teens, I remember a few of my friends made fun of me for having this disorder. It made me feel really bad. And although I do joke around about my hypochondria -- for someone to make fun of me or minimize my concerns -- that still hurts me. Any type of mental illness should be handled like any other type of illness. It's very real and it can debilitate your life to the point of living like a physically ill person when the person can be completely healthy. The only thing that can really help is therapy, and CBT (Cognitive Behavioral Therapy), where the patient can learn techniques with coping and rationalizing.

The other day, my friend posted this quote, "My invisible disease is more real than your imaginary medical expertise." 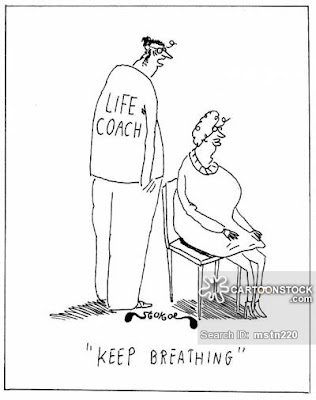 Don't give medical advice. Give your thoughts or concerns and maybe even tell them what helped you if you suffer from something similar. The worse thing you can do is say, "Oh come on, get over it," or worse off, minimize a real sickness when they do come down with it thinking, "It's just their mania again." For instance, I had a hysterectomy. I had my uterus, fallopian tubes as well as my cervix taken out. It was a five hour operation with a three hour recovery time. I had complications and was sent back to the hospital due to a surgical infection. I had a very hard time with it and it was not "all in my head". Someone said to me, "I had the same thing done -- I had a fibroid removed. It's no big deal." (I'll let that sink in for you.) To compare the removal of a fibroid tumor to major organs being taken out is just downright inconsiderate --or perhaps just uneducated? I don't mean that in a bad way, but maybe this person doesn't know what's involved with a hysterectomy. Yes, it is a very common operation, but nonetheless, major. To minimize such a procedure, especially considering it was also emotionally taxing, is very hurtful. And remember, real things happen to even the worst types of hypochondriacs. Sometimes the wolf is all too real.

For more of Deb's articles, please visit: www.debrapasquella.com or join her on Facebook and Twitter. Check out her cooking blog for some of her famous recipes!
at March 09, 2016

If there's one thing I've learned in life, it's to love people as much as you possibly can, and help as much as within your capa...