Christians Who Primarily Focus on Homosexuality Based on Fear

You wouldn't normally think that a Christian conservative's mind would keep stumbling upon the same thought time after time: sex, sex, sex and more sex. I do believe that there are Christians out there that are very concerned about sexual relations (of any kind really), but more so in hopes to keep their own repressions in check. And hoping that I don't sound too redundant and cliche -- why do you think so many priests fail to fall into the "purity" category or perhaps slip into a slimy world of pedophilia? Their prey are usually weak and vulnerable. They need weak individuals to target, otherwise their mission would only be that much harder. I mean -- what adult in their right mind would have an affair with a priest without the notion of going to hell right before leaving his bedroom...or confession booth? Sexual repression for some people can be dangerous because it's like a dam. One simple crack can bust through the vulnerable areas if it's not controlled.

Control. Interesting word. We're taught at a very young age to control our feelings. "Don't go by your feelings -- go by the Spirit."  And while I do believe that in certain circumstances, we're also made to believe that loving someone could possibly be wrong and "not of the Spirit", we're also teaching our youth to be dishonest with their own feelings due to "moral obligation" or thought-to-be and perhaps misinterpreted biblical moral standards. We're made to believe that our love for somebody else is "of the flesh". With any new relationship, it goes into the first stages of courtship. Let's be honest here -- there is probably 2% of people who go into a celibate courtship. If the two people held up to their "moral obligation" and refrained from sex altogether until after marriage, then that's great. It's also a personal choice. Is it realistic? No. But it is a beautiful thing to wait until after marriage to have sexual intimacy. The problem is, "moral society" -- "Christian society" demoralized same-sex marriage. It was never legal until 2008 or so, and that's in a few select states. There were couples who had marital ceremonies and those who chose to live a domestic partnership without anyone consenting to their union. So the whole concept of "sex after marriage" became a twisted interpretation of "immoral sex". 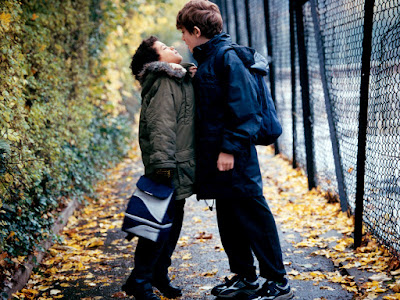 I have legit and valid concerns regarding Christian conservative parents teaching their kids that homosexuality is "wrong" or "evil". You can say it's none of my business, but just think: what if a parent taught their child to believe black people or Jewish people were all bad? Their kids would most likely end up bullying those children. The same with gay or lesbian kids. Intolerance and hate are first taught at home. They pick up on what their parents detest and use it as ammunition once they get into a tickle with someone in the schoolyard. Teaching your children that homosexuality is wrong is very destructive and I even want to say, cruel. I wonder if some of these parents even think about the consequences of bullying, like self-harm and suicide statistics. They don't care. They only care about their own children being straight, regardless if a kid hangs himself due to their teachings. Heterosexuality hold both moral and immoral standards. We all fall short of whatever our sexual identity holds for us. It's sexual immorality you want to teach them about -- not just the sexual immorality of homosexual kids. It goes both ways. 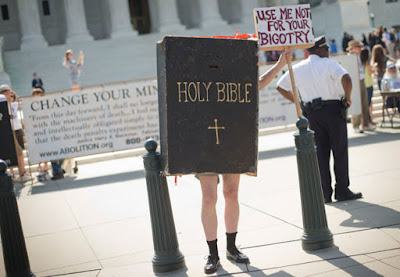 In short (because I have written this a million times), here are the facts:

Leviticus: Old Testament. Our sins were abolished once Jesus died on the cross. Christians no longer go by Leviticus as the Jews still do.

New Testament: Speaks about the promiscuity of all homosexuals as well as heterosexuals. They have taken the meaning of reckless sex and threw it upon all gay people.

Sodom and Gomorrah was about rape and humiliation -- not sex between two people who love one another. But Christians will cherry pick this and twist the story around to condemn those who are homosexual.

(If you need further scriptures to reference to everything I am writing about, please feel free to contact me on the side bar.)

So with our handful of homosexual references in the Bible (some not even referring to homosexuals themselves but the act of reckless sex), they never seem to focus on the 100 plus verses on slavery and find it to be "okay" to accept those who are adulterers -- which can be someone divorced while her ex is still alive. In the Bible it talks about divorce being even more sinful than homosexuality, especially if her ex spouse is still alive. The Bible is convoluted with ancient stories that we no longer abide by i.e.: slavery (thank God), and if we were to go by all the rules of the Bible, then what kind of world would we live in? It would be a man-driven society to control the masses -- to control the immorality of people -- even if they're behind closed doors.

And it's all out of fear. 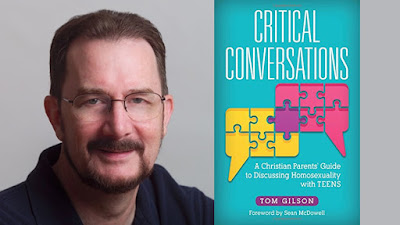 There is a gentleman named, Tom Gilson who wrote a book called, "Critical Conversations: A Christian Parents' Guide to Discussing Homosexuality with Teens". 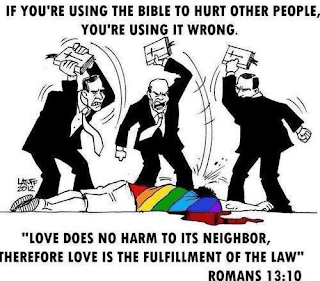 The description reads: "Christian parents need to be prepared to answer the myriad challenges teens might hear in today’s increasingly pro homosexual culture. 'Why shouldn’t gays get married?' 'Who says gay sex is wrong?' 'Does the Bible actually say there’s anything wrong with homosexuality?' 'Don’t you care that kids are being bullied just for being themselves?'

To start the discussion, Gilson provides a brief history of the issues beginning with the sexual revolution of the 1960s. He explains how and why cultural attitudes have reversed on this subject in such a short timespan, leaving Christians scrambling for answers. This is perhaps the most complicated and contentious issue Christians face in today’s culture. Most churches are poorly equipped to handle it; parents are even less prepared. The good news is that parents need not have pat answers ready before they dive into conversations with their teens and preteens on this difficult topic. Learning together―parents struggling through these issues alongside their kids and leading them to biblical answers― has relational benefits. Answers are important, though, so manageable, nontechnical answers to common questions surrounding this issue are provided, as well as a guide to further resources."

Mr. Gilson wrote a whole book based upon his fear of his children being gay, and your children being gay and perhaps his own fear that he's gay himself. I can make all types of assumptions based on their "homophobia" (which by the way, many Christians hate that term). Christians feel that most liberals (which I don't label myself as) use the word "homophobia" in an incorrect way. But it's not being used incorrectly. Homophobia is the fear of anything that has to do with being gay. It's the fear of your children being gay and an overall fear of anyone imposing their homosexual lifestyle on themselves and their immediate family. Homosexuality isn't contagious. It's genetic with the choice to either repress your true feelings or to live your life genuinely.

Mr. Gilson used a term that I sort of chuckled at while being interviewed the other night. He said that gays and lesbians base their relationships on "excessive lust". He primarily focused on the sexual aspects of gay and lesbian relationships. I've always wondered why antigay Christians would totally go right into the sexual aspects of homosexuality.  They base some of their premise on the fact that God made men and women to procreate. And yes, while that is true, the Bible never speaks upon same-sex "relationships" -- just the promiscuity of all heterosexual and homosexual people. What if a married heterosexual couple were not able to procreate due to health reasons? Should they divorce since they cannot procreate?

Antigay Christian conservatives mostly focus on tearing apart the LGBT community due to fear alone. In my opinion, this has a great deal to do with their own sexual repression. Most homophobic Christians are homosexuals. They've done hundreds of studies regarding this all proving it to be true. Look at this video below. This was done back in the 90's I believe, but more studies have proven that those who focus on bashing gays or who are just against homosexuality are indeed gay themselves. If you can't view the video, please click here.

When you encourage homophobia, especially teaching people that homosexuality is wrong or "sinful" -- then you're displaying a level fear that goes beyond "protecting" your own children. You're displaying your own fear of homosexuality, your own fear of being gay yourself. How many antigay Christian politicians were caught on Grindr and gay porn sites and even have had gay affairs? You can just Google that info and it's up for grabs. There is no such thing as an "ex-gay" or someone who states that they've had homosexual feelings at one time and one day they magically disappeared. When being asked if it was a choice to be gay, I always ask them, "Was it a choice for you to be straight?" They usually answer, "Of course not!" It works both ways. 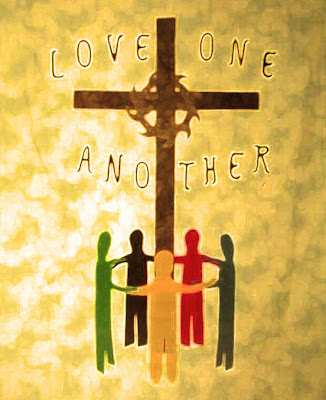 The Most Important Commandment: "One of the teachers of religious law was standing there listening to the discussion. He realized that Jesus had answered well, so he asked, 'Of all the commandments, which is the most important?' Jesus replied, 'The most important commandment is this: Here, O Israel! The Lord our God is the one and only Lord. And you must love the Lord your God with all your heart, and all your soul, and all your mind, and all your strength. The second is equally important. Love your neighbor as yourself. No other commandment is greater than these.'" ~Matthew 22:34-40

The most important commandment is love one another. God doesn’t hate, no matter how many times some “Christian” will sit there and condemn you for being gay. If you're a Christian with a large platform to minister to others, then why would you minister on just one sin? Why would you intensely focus on something that has nothing or zero to do with you? How are homosexuals ruining your life? Why not focus on the real sins of life, like murder, rape, pedophilia, ISIS, Trump. (Had to add that one in.)

My point is: so many knowledgeable Christians are wasting their teaching platforms to instill their own fear upon society. Fear is not of God. The only thing to conquer your fear is through love. Why aren't we showing more of that?

Feeling the Pull of This World and Why

We are in the great transitioning of our species---an awakening of our DNA into our galactic nature. The matrix is throwing all kinds of dis...