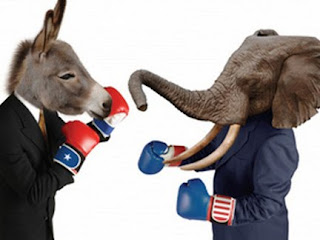 The other day while I was in the grocery store, I overheard two men debating over politics and the opinions over the republican candidates. Of course, it got heated because one was for Mitt Romney and the other for Obama. Arguing over politics is the same thing as arguing over religion and “set rules”, etc. No one wins and the thing is, even though you preach a good spiel about your thoughts, opinions and whatnot, you’re not doing anything but invoking anger in those who disagree, or simply do not believe. Of course, I do feel that if you share your beliefs and opinions with someone you ‘think’ is okay hearing it, then fine. I often see people bait others in just to attack their views. It’s pointless and childish. So this argument got heated and it almost came to blows. The funny thing is, after someone is finally elected, the arguments get less and less and no one says boo about anything regarding politics until election time or when someone makes a huge moral mistake in office. I truly believe people are just bored these days. They have nothing better to do than to invoke some heated debate whether it be in person (which is more courage mind you) and especially on Facebook. People seem to have more balls on Facebook displaying their extreme views or if they’re just running with the mass like a herd of sheep.

I’ll never forget the time I was waiting to vote for our next president. It was between McCain or Obama. There were only a few people inside. A lady who was volunteering her time at this particular place walked over to me to chitchat. The one thing you’re not supposed to do is talk about the candidates or persuade your views on anybody else. Well, this lady did it on the sly. She started off by telling me about her son who was still in Iraq. “What a shame that we’ve endured so many years with Bush, and now we have similar candidates running.” I knew where she was heading with this but I just kept focused on her son and how he was doing, when he was coming home, etc., but she darted back to the candidates in a roundabout way. “That’s why it’s so important that we have a president that believes in bringing back our troops.” With whatever side I was on, this could have taken a turn for the worse. She could have said this to someone who believes the total opposite and there you have it - an emotional mother whose vote means her son’s life and a hardcore republican who feels that war is necessary. Why even go there if you know that this could even happen? I don’t understand people. You’re not influencing anybody’s decision - you’re invoking anger. Plain and simple. Most people who blather all over their Facebook about their political views are usually the ones that don’t do shit about it. They don’t protest, they don’t write to congress about their concerns -- all they do is bitch and moan to their “friends”. They feel as though this is ‘good conversation’.

Not too long ago I was in the company of close friends when one of them started ranting about politics. I have learned (after many years) that when people are trying to get a rise out of you because they feel they know your views, to shut yer’ trap. And I did. I just sat there and listened to him as though I was learning something new. I didn’t say my view or how I felt - I just listened. My views mean nothing to him. Just like religion - your views will mean nothing to someone who believes something different. They can listen and hear what you have to say but no one can take away your core beliefs. So why even go there? “We’re trying to save people!” Well, great. Try acting like a true person of “God” and your actions will demonstrate your particular belief in whatever god you worship. I think a blog is a great forum for these political/religious chatterboxes. I have one so I can do just that. But Facebook is a whole different story. Once you post your religious beliefs and political views, it can become a full-fledge debate in 0-2 seconds. If you have a “fan page”, then great. These people decided to “like” your page due to your beliefs. That’s different. I also think some ‘attention whores’ like to give shock value to their Facebook with political outbursts, perhaps it’s a cry for help. But all in all, think of Facebook as a bar full of people. Would you dare ‘go there’ with others face-to-face, or would you rather hide behind your monitor making these extreme views the only views that should be seen?

And to me, it makes no difference who wins. It’s the electoral votes that count the most. And whether ‘this one’ wins or ‘that one’ wins, it’s the same bullshit. So why argue? After November, our Facebook feeds will show nothing but overused quotes and cute puppy pictures again. Have hope & shut the front door for heaven's sake.