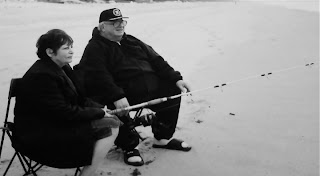 Without a doubt, it’s hard to see a loved one sick, and even harder to watch someone facing a terminal illness with a potential expiration date. My family has to excuse me for writing about this, I know they are a bit more private than I can ever be, but this is my outlet and perhaps my writing can help someone else going through similar situations. Last Sunday, Madelene’s family and my family got together for dinner. We had a great time and dad seemed to be doing okay for the most part. I noticed that my father wasn’t eating very much, however when I made coffee and put the desserts out which Mad’s mom brought over from this incredible bakery, he began to eat more. He livened up with some coffee and a bit of Puerto Rican anisette. (We all did actually.) Dad was happy, talking & laughing with everyone. Later on that evening, mom calls me and tells me to call 911 and come down ‘cause dad was sick again. Dad was disoriented - didn’t even know who we were. Mad helped him walk over into the living room where the ambulance would check his vitals and then cart him off onto a gurney into the ambulance. He had congestive heart failure...again. On top of that, he got another infection in his blood due to his kidneys not draining properly. On top of that... his cancer spread.

Yesterday mom & I drove up to the hospital to spend the day with him. We all know the truth, but we try to keep dad’s spirits uplifted. We try to give him hope, because we don’t rely on a doctor’s “time frame” - we rely on God’s time frame. Fifteen years ago, dad was rushed to the hospital for congestive heart failure. He was given two months to live. Yep - fifteen years ago. Amazing. The doctor put the fear of God into my dad and the rest of the family constantly keeping one eye on him not knowing ‘when’ - and yet my dad was healthier than an ox. Well, a female doctor walked into my dad’s room yesterday while my mom was sitting across from him, as he was sitting upright in a big reclining chair eating his lunch. She sat down, asked how everyone was and then begun to say the most sobering things ever imaginable. I can’t remember everything word-for-word, but basically she asked, “Are you prepared to die?” She went on to say that it’s important for his last days with hospice to do all the things he wants to before his expiration date. She also asked, “Do you want a DNR and can we put a feeding tube in you when you do become sicker, because the cancer is going to take over.” As he chewed the last bite of his chicken salad sandwich, I saw tears welling up in both my parents’ eyes. He started banging on his chair in frustration, asking, “I’m gonna die? I’m gonna die? When am I gonna die?” My mom’s eyes widened bigger than I ever saw them, and if possible, they turned completely black - I can’t explain it. She then said, “We will talk. about. that. amongst. ourselves,” in such an angry tone that I've never heard from her before.

The female doctor kept on though. “Well it’s important to make these types of preparations for the family.” I chimed in and told her that we had a proxy and that the family will discuss this together, as the previous doctor wanted to do. Mom said, “We want to give him hope and he’s gonna be just fine.” The doctor replied, “Since chemo is no longer an option, the cancer will take over, so this is reality.” I then asked if I could talk with her alone so I could take her out of the room. I explained that we all know what’s happening and we all know the reality - but we’re trying to give him some happiness, some hope, some faith that there are miracles because in the past, he was giving a sentence for his life and that never happened. I asked if she could just speak to the family together without my dad so we can be the ones to help him through this. She also indicated that it was her legal obligation to talk to the patient about his impending 'doomsday'. Seriously? I mean, isn’t it better for the mind and spirit to help someone who has cancer to give them hope till their very last day? Isn’t it okay to have faith that he WILL beat this cancer --- even if he doesn’t --- can’t we have a tiny bit of positivity and see dad smile for now? When I came back inside the room, mom wanted to go downstairs for some coffee and we talked about it. She was pissed off beyond belief. I reminded her about the idiot doctor from fifteen years ago, and she cracked a smile through her tears. When we came back to dad’s room, (thankfully he forgets a lot these days), he said, “The doctor came in (an infectious disease doctor) and said that he can cure me!” (The doctor meant he can cure the infection only.) Dad smiled and we were just glad his spirits were lifted. “What does that stupid nurse or whoever she was know anyway?” We laughed and the day was pretty much full of joking around and relief...(to a degree.)

Aside from all that, Madelene asked me something that morning that kind of stuck with me. She said, “Do you think we should have had my mother and all of us lay hands on your father and pray for him?” I immediately said, “Sounds nice but I think my father would feel a bit weird.” Although I want that, not sure how comfy dad would be with the ‘religious’ stuff. He believes in God and has been talking more about it lately, but not enough to get into the full-fledge ‘laying hands on’ type of praying for him. As I was sitting in the room with dad later on that afternoon, I was reading my Bible on my iPad. Strange, because it opened up to a passage that said, “Is anyone among you sick? Let them call the elders of the church to pray over them and anoint them with oil in the name of the Lord.And the prayer offered in faith will make the sick person well; the Lord will raise them up. If they have sinned, they will be forgiven. Therefore confess your sins to each other and pray for each other so that you may be healed. The prayer of a righteous person is powerful and effective.” ~(James 5:14-16) I prayed about it in my mind and asked God, “How am I going to get a “righteous person” to come in here and pray over him?" And right when I looked up from my iPad, a priest came walking in and asked if it was okay to pray over him. He said such a beautiful prayer and asked God to take away his sins in Christ’s name. I wanted to cry right there because I knew, that without a doubt, that it was from God.

You know, many people doubted his ability to maintain a healthy life. Many people, this includes some extended family members, friends and others who saw him chain smoke, eat whatever he wanted and lived his life the way he wanted to - they all said he wouldn’t live past fifty. Most doubted his health, meanwhile having low cholesterol and perfect blood pressure most of the time. He beat the odds. He outlived many people who were even younger than he was - this including his own brother who died at the age of 31 from a heart attack. He outlived most of his friends and basically proved everyone wrong. The one thing that got him was the one thing no one ever suspected: cancer. I’m proud of dad for living the way he wanted to. He was always happy, resilient, and positive. He’s 74 years old. He’s lived longer than most who have lived a “healthy lifestyle”. I feel fortunate to have had him this long and will feel even more fortunate if God blesses him with another few years. My family is strong, we’ll get through this and whatever is in God’s will is the verdict - not the doctor’s. I believe in miracles and I also believe in reality. Without a positive outlook, some uplifting words of encouragement, how are you supposed to give someone the strength or the will to keep pushing forward? What this female doctor said almost made him want to give up. What she did was disgusting - yes it was reality - but she said such grim things and he visualized it to the detail she had given it. Maybe I’m wrong. Maybe he should be given doses of “reality” - but he already knows and sometimes, yes he forgets and thinks he’s going to be cured. But God is the only one that really knows that and God is the only one who can really do that. Now that’s my reality on it. If he can do all things with the strength of God - then why would we ever doubt God’s ability? I still have faith.
I will be in the hospital and helping the family most of the week, so I may not update as much. feel free to leave your thoughts in the comment section. I will always be updating my Twitter account since it's the easiest for me. And if possible, would you all please say a few prayers for my dad?

For more of Deb's articles, please visit: www.debrapasquella.com
battling cancer Debra Pasquella doctor's diagnosis have faith I can do all things through Christ