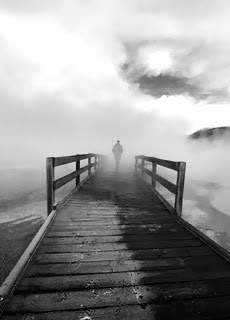 While releasing a few comments from a previous post due to a ton of spam I get, I came across a commenter who said something pretty significant. She opened my eyes up to a different way of viewing religious views and discussions.

”When I struggle so much with a philosophical question about faith, I personally back away. The debate and discussion will, most likely, not bring you closer to peace. Seek the peace directly instead. There is a point where religious beliefs diverge, based on specific tenets -- but there are enough commonalities to love and appreciate. In the meantime, for me, none of that takes the place of deep prayer -- not even my own religion. My *beliefs* and *religion* are not enough. It is in my deep, prayerful search for God that I find some peace. I offer this with great humbleness.” -Mary Agnes Antonopoulos

Basically, when people talk about religious views and start having debates, there will never be peace. To find peace is to find your “God” from within and not from outside sources. I do believe that there will never be peace in debating about religion since there is absolutely no other proof than your faith alone and written scrolls from centuries ago that may prove something, but science will always bat it back down into the ground. Science and spirituality are like oil and water.

If you tell me I'm sinning, then prove it other than flipping through a 3,000 year old book that's been written by man, "inspired" by God, which has been translated and misinterpreted from the day it published.

So with that in mind, I’ve come to the conclusion that people are deathly afraid when someone else of another religion threatens their afterlife. Doesn’t that make more sense? I mean, picture this scenario: I say to you, “Oh you must be a writer and editor”, all the while your dreams and aspirations are to be a CPA or a stockbroker. Two different animals. You’d probably look at me and say, “But I’m not interested in writing or editing” - and I’d say the same to you if you told me to become a CPA or a stockbroker.  (I’d probably make much more money taking the CPA or stockbroking suggestion, but that’s neither here nor there.) Same with religion though: it’s our destination; it’s our afterlife. Don’t tamper with it. With that, I am learning to be strong in my own faith and in the process, being easier on those of lesser faith that of my own religion who believe in another faith or perhaps, believe in every religion. Even if it doesn’t make logical sense “to me” for someone to believe in every religion: it’s their thing. It’s their belief. It’s their destination. Leave it be.

I guess what I’ve been hearing all along is ringing true for me: take down the barriers of dogmatic views and see the human element instead of what’s been taught or driven into us most likely since childhood. For me, as a person with Christian faith, what is it to be “Jesus-like”? He accepted all who came to Him - even nonbelievers. So my point is, I will not defend my religion, my views, my beliefs and whatnot, but instead I will share them, as I’ve done. I will leave out the dismissal of other religions and will refuse to threaten someone else’s afterlife theory or belief. There are arguments about the Trinity itself: how can God, Jesus & the Holy Spirit be one? Each religion has its own complexities if the nonbeliever is hearing it from someone of its faith.

Perhaps if we stop questioning life, spirituality and all that’s entailed with living and “living for”, then we are in fact, dead in spirit. With the fact that there is no such thing as “scientific truth” to spirituality or religion, the questioning process is a never-ending one. What about theology? Who’s to say certain scriptures and scrolls weren’t written by man to control the masses? We’re human, we can be unruly and maybe by “threatening our afterlife” because of our past and current behaviors, religion had to be instilled in order to teach us “right” from “wrong”. What about yin and yang - the good and the bad - happiness and sadness? Without these polar opposites, there would be no pursuit to progress or to become “better people”. If someone has never experienced great sadness, quite possibly they’ll never get a chance to experience what it truly means to be genuinely “happy”. Gratitude from getting out of a negative or depressive situation leads to happiness and contentment if one chooses. You can also remain miserable and bitter and spiral downward from there. It's your choice.

In conclusion, I would like to share one of my favorite scriptures that goes hand-in-hand with today's post. I think you’ll find fascinating since it’s typically something a “religious” person would scowl at.

“Accept Christians (or people of other religions) who are weak in faith, and don’t argue with them about what they think is right or wrong. For instance, one person believes it is all right to eat anything. But another believer who has a sensitive conscience will eat only vegetables. Those who think it is all right to eat anything must not look down on those who won’t. And those who won’t eat certain foods must not condemn those who do, for God has accepted them. Who are you to condemn God’s servants? They are responsible to the Lord, so let him tell them whether they are right or wrong. The Lord’s power will help them do as they should. In the same way, some think one day is more holy than another day, while others think every day is alike. Each person should have a personal conviction about this matter.” ~Romans 14:1-5

For more of Deb's articles, please visit: www.debrapasquella.com or join her on Facebook and Twitter. Check out her cooking blog for some of her famous recipes!
afterlife Christianity Debra Pasquella religion theology