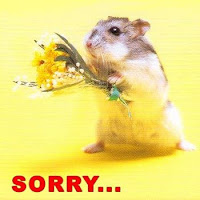 It’s been a while since I’ve actually written a solid entry in here. My computer, as you know went bonkers on me. I had to get it repaired and send it out since it was still under warranty. The most frustrating aspect of it all was the tech support group in India who helped me- or at least tried.

Since I’ve been without a computer for this long, I’ve done a lot of praying, meditating and reading. I’ve been coming to terms with issues that haven’t been resolved. Yes, I have issues – ask my shrink. I realized this week that I’m a total control freak. If things aren’t going accordingly to “my plan”, then I’m bound to stomp, bitch and moan over the things that cannot be “controlled”. (Hence my previous short post.) That explained a lot. See, all my life, I had this idea of anyone who came into my life needed to meet my ‘standards’. My standards were impossible. I'd make a fuss over many things, such as a partner on a business trip, late hours, someone who focused way too much on work or other things, other than me. Me me me. Get over myself, right? I can sit here and ramble on about relationship issues and “advice”, when really, I’m the one who needs it. I can tell you what may be right, but I didn’t realize that what I was doing in my own life was actually poisoning my own relationships. Even with certain friendships, there are conflicts that arise, which I seem to never witness through their eyes. I don’t see it their way. I always see it my way.

What I learned this past week: if we show more understanding, we gain more compassion and patience. We gain more trust. We develop better relationships.

"Dear brothers and sisters, when I was with you I couldn’t talk to you as I would to mature Christians. I had to talk as though you belonged to this world or as though you were infants in the Christian life. I had to feed you with milk and not with solid food, because you couldn’t handle anything stronger. And you still aren’t ready, for you are still controlled by your own sinful desires. You are jealous of one another and quarrel with each other. Doesn’t that prove you’re controlled by your own desires?"

To break that passage down, to “belong to this world” means to conform to the ways of the physical nature – to fail to see the bigger picture and not focus on the good – the Kingdom of God, instead of earthly matters. Some people get confused with, “you don’t belong to this world”. We don’t. Our souls don’t stay here when we die. At least, that's my belief.

To feed us with milk instead of solid food is meant to display a learning process of acting humanely to one another, instead of trying to control people, which leads to bickering. Whatever you resist persists…

Sinful desires demonstrate the negative process of “controlling” other people in this instance. Sinful desires can mean a number of things, but with this passage, it’s based on our own selfish needs – idolizing and treating others poorly. When we’re jealous of others and quarrel with them, we’re creating negative energy that doesn’t coincide with positive ones. They don’t mesh well, which creates conflict.

I’ve come to realize that if I allow things to happen around me that are “none of my business”, or “out of my control”, then things will work in a positive nature, because if you truly love someone you ‘let them go’; you let them be themselves. Everyone is a unique individual. They have different needs, they desire different things, yet they want you in their lives, knowing that your standards or wants may be totally the opposite from theirs. How does that happen without conflict?

Acceptance and understanding. Accepting someone for their ability to do the things they want to and live their lives accordingly to their standards puts a whole new spin on things. Understanding that their goals are completely different from our own. I would fall back on, if you live this life with me, then your life should be like mine.

Two people who are together, or in the same living quarters need to live their lives as separate people, yet have that special ability to share in one another’s lives. Instead of “controlling” a person’s life or bitching and moaning about something you would prefer them not to do, focus on the positive aspects of them. Why did you fall in love with them in the first place? List the qualities – stop focusing on the negatives.

I’ll admit, my personality is very strong-minded, controlling and at times, manipulating when things don’t go my way. I’m not proud of that, but I’m still learning. By holding onto something too tightly, we automatically let them slip through our fingers. Sometimes we’ll say, “Oh she’s become such a different person,” when in fact, I was probably the one who made her stop being herself. “Oh this is not the girl I met.” Well, maybe it’s the girl you met- but hiding, trying to please someone else’s “standards”...mine.

God’s been nudging me lately. He’s been sending me serious messages about my behavior. I’m still learning as I go. I hope all who were in my path were able to realize that it was my issue, and not their own.