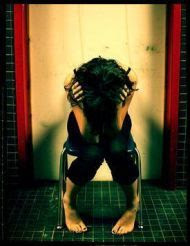 Anger is a compelling feeling to which many take action upon. It nearly consumes you. The emotional reaction affects your verbal or physical response. It’s a negative emotion, to which a lot of people give into. In fact, a lot of studies show that people, who get angry often, usually are at greater risks for high blood pressure, stroke and heart disease. This emotion isn’t only dangerous for other people around you; it’s dangerous for you as well.

I’m no stranger when it comes to popping my own cork. I tend to lash out with words, or sometimes, as my sisters will say, I have a “poison pen”. If one of my sisters upsets me in some way, I’ll send them a very powerful and angry email. These are first responses. I usually never wait for the second response, which is a calmer approach to it all. They always say to wait 24 hours before you respond to something while being angry.

Don’t sin by letting anger gain control over you. Think about it overnight and remain silent. ~Psalm 4:4

It’s so hard to not respond to something or someone who has angered or upset you. If we wait long enough, we’ll probably forget about why we were angry. (Which is part of the reason why I react so much!) But, in the bigger scope of things, it’s “wiser” to take that risk of “forgetting”, and wait it out. Usually, I see the entire argument or conflict in a different light. Sometimes, I wonder how I even got angry at such a trivial thing.

A gentle answer turns away wrath, but harsh words stir up anger. ~Proverbs 15:1

The other day, (which is in my previous post), when I finally popped my cork at my father, I could have changed that whole situation by calming him down with a gentle answer. I want to say that he got me at a very bad time----but that’s no excuse. I want to say that it has been a hell of a week for me, but again, that’s pointing the blame on something else.

Even though my father was wrong about his accusations, I should have been calmer and more understanding to why he thought it was me who didn’t lock the main doors. I should have been more empathetic to his concerns. His concerns were valid. By lashing out at his wrongful accusations, I was basically telling him that his worries about people walking into the building were silly or irrational, which made him angrier.

Even with our significant other, we seem to sometimes possess the one thing that stirs up anger: jealousy.

A relaxed attitude lengthens life; jealousy rots it away. ~Proverbs 14:30

Of course, in Corinthians, it states that “love” is not jealous. I think it’s safe to say that everyone has had that tinge of jealousy throughout their course of their relationship. It’s normal, but if you let it consume you, it’ll rot out the entire relationship. I have a close friend of mine who is in the music business. She has a Myspace account, to which she has over 1,000 people listed as her “friends”. Now of course, most of those people who are listed as “friends” are fans. They leave weird comments and sometimes very intimate ones. My friend’s partner obsesses over the website and gets upset whenever someone makes a sexual innuendo or gesture, showing that it “may” be more than a friendship. Everybody on those types of websites puts out these glittery little sexy comments- which mean absolutely nothing. It’s basically people who want to be seen or they want comments back on their own page. It’s nothing other than that. Her partner needs to take those comments with a grain of salt, since her girlfriend is out there in the public eye. If her partner cannot handle the volume of people that will approach her or doesn’t trust her, then the relationship will soon fade out unfortunately. Jealousy rots.

It’s harder to make amends with an offended friend than to capture a fortified city. Arguments separate friends like a gate locked with iron bars. ~Proverbs 18:19

Even in intimate relationships, arguments are going to be inevitable. It’s those arguments that you cannot repair; the ones that have offended one or both parties. You can always forgive, but like I always say, it’s so hard to forget! We’re human and we hold on to old wounds and scars. If we pick at them, they’ll resurface, making it a fresh new wound. It takes an awful lot to repair a damaged relationship. Sometimes, it’s best to go separate ways, but if you’re strong enough, you can look past the human flaws that we naturally have and make a new beginning. That’s up to the person who has been offended though. If you keep resentment in your heart, the relationship will always suffer. Let it go. Give it up to God and pray for strength and courage.

If you forgive those who sin against you, your heavenly Father will forgive you. But if you refuse to forgive others, your Father will not forgive your sins. ~Matthew 6:14-15

How can we expect to hold a grudge when God has given us mercy? We’re supposed to be more like Christ and forgive those who have wronged us. My mother always says that I’m quick with my temper, but also quick to forgive. I have a lot of work to do regarding my response to things, but all in all, my forgiveness is never ending.

Peter asked, “Lord, how often should I forgive someone who sins against me? Seven times?” “No!” Jesus replied, “Seventy times seven!” ~Matthew 18:21-22

God’s forgiveness is limitless. He wants us to be the same---the best we can, and to forgive those who offend us. If we’re not able to do this, we’ll never heal from the battle we were up against. It’ll fester in our hearts, eventually making us cold and bitter to those around us. We become numb to those who are trying their best to please us. We’ll lack trust for anyone who comes across our path. I know this all too well, because I was stuck in this same predicament. I still have to work on my trust issues. I’ve been hurt a lot in the past, which made me realize that I wasn’t letting go of it all. By letting it all go, I’ve managed to rebuild my trust up for those who truly deserve it.

You must make allowance for each other’s faults and forgive the person who offends you. Remember, the Lord forgave you, so you must forgive others. ~Colossians 3:13
at August 22, 2007