- May 13, 2006
My friends forgave me for the AA 12 step program apology post I had written prior to this, and went out with me for a few cocktails last night. And yes, of course I have the pictures for evidence, as always. 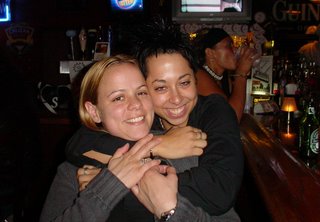 It started out nice. We were pacing ourselves, socializing and just having a great time. Here’s my friends Jodie and Brianna. They called me up last night and said, “Deb, come on out.” And I never hardly go out on Friday evenings because Madelene has to get up for work early the next day—so Saturday is our out night. Bri was very convincing though. I went by myself to head all the way upstate to join the gang. I think Bri hit the sauce a little earlier in the evening--but that's okay--we won't say a word. 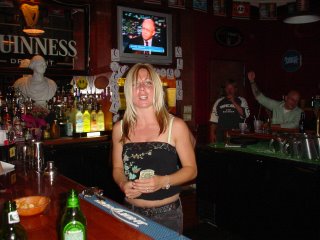 Umm… Bartender! Bartender! Can you stop drinking for five minutes and bring me a beer please? Now I’ve heard of taking a few swings here and there while tending bar, but this girl was ripe. She was ready to party on the job. I was ready with my camera and luckily got a few nice shots of this beauty (even though she looks as though someone viciously attacked her in this shot—she's still a looker.) All the guys in the background over there were really, really thirsty. After her shift, she flew over to the dance floor to work off some of that lethal potion she was taking shots of. 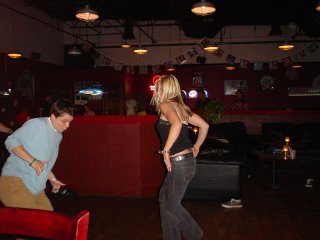 So here’s the deal. This bar generates a lot of gay clientele. We have a mix at this place since Alyssa and her band drum up a good crowd. The girl in the blue was doing some sort of tribal dance I wasn't familiar with. And yes, that is a girl on the left. 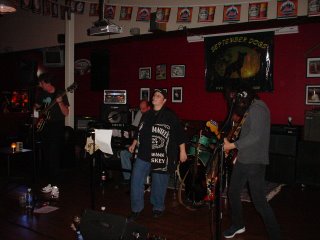 Alyssa and her band rocked! This girl shouldn't be doing bar gigs, she should be selling millions with that voice of hers. She's not only a talented singer and guitarist; she entertains the crowd with her raw and cynical sense of humor. 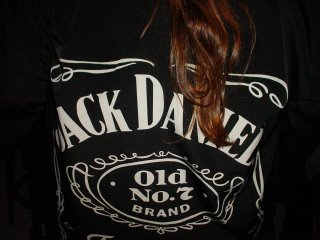 The night’s never complete without your fill of Jack Daniel’s apparel. Just when I thought Alyssa was original and ‘unique’ for wearing this, I saw another person walk into the bar with the same shirt on. It’s like prom night all over again when another girl is wearing the same dress as you.