Isn't it fascinating how some people can tear you apart over on social media (keyboard warriors) but in real life, they wouldn't dare confront you? Even if I'm debating with someone online, I try to take a respectable approach, a nicer approach, because it's the adult thing to do. It's what I want to do. I want to treat you with respect, and hear you out, but also be allowed to give you my opinion as well. But what happens when you're verbally attacked and insulted for say, tweeting out an opinion? Would that same person be willing to say that face-to-face? I could not even make this up, but a woman named, Karen----go ahead and laugh it out----seemed to be upset when I replied to a tweet that said, "People recovering from COVID-19 may suffer from significant brain function impacts, with the worst cases of the infection linked to mental decline equivalent to the brain aging by 10 years, researchers warn." 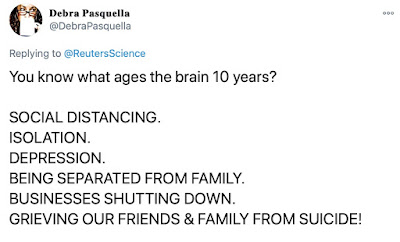 Karen decided to chime in, but she was missing the entire point of my tweet.

I explained to her that she was missing my point. Maybe the caps lock caught her off guard and she assumed I was "screaming," but she took this tweet to a whole new level. I told her that I believe the virus is very real, and that we need to look at other issues, like mental health. The isolation, social distancing and lack of human contact can and will have an impact on our brains as humans. We need that interaction. I also told her I knew of a couple of people in my life who committed suicide due to this pandemic. Then it calmed down. She was explaining to me how sad she was that her mother was in a nursing home dying, and she has no way to be with her in person. That truly broke my heart. See, it's not that I don't want to wear a mask, or social distance, or comply with whatever mandates there are, what I want is to go back to 2019! A time I once complained about, also a time when we all hugged one another, never fearing the common cold or the seasonal flu. I want that back. This is why I appeared to be "screaming." I want to hug my sisters! I want to hug my friends again. I'm so sad over this, and so are many many people!  She even tried to make it political, and my response was, "I'm sorry to hear that. Me too. I suffer with anxiety & depression, and this has truly taken a toll. Even seeing friends kill themselves over this. Between the fear of COVID & isolation, it's slamming us in various ways. Politics aside, we all have to push through this somehow." I wasn't going there after we somehow managed to have a warm conversation about this heartbreaking fiasco we are all facing one way or another.
Disconnected By Being Connected 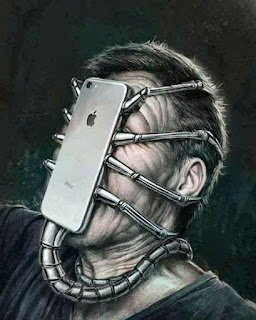 Whether you want to admit it or not, we are all somehow more connected to the internet more than ever. Maybe you've weaned off since last spring, but most of us are now working virtually, with Zoom meetings, plus having virtual doctor visits. It is nice to see some people getting together safely, and while that's okay, I'm still not ready for that and I also have no judgment against it. It's none of my business what people do with their own lives. I've learned that doctors are more knowledgable in treating COVID more than every before, and there are much less deaths, but it still keeps me at bay for now. With all that being said, many people are relying solely on social media to "connect" with one another. Some use it as the only means to communicate. The virus somehow has become one big political fiasco. People are "unfriending" one another---(yes that word is actually in the Webster's Dictionary now,) due to political differences, among other reasons. One simple tap on the "friend" button, and you can delete that person completely out of your life, if you so choose to. Or, you can be an adult and not discuss politics, or perhaps talk to them with whatever you're upset over with your "friend." It's not that hard, but these days, especially the younger generation, it's just easier to tap the button and be gone with them. And that's the beauty of "social" media.
Face-to-Face 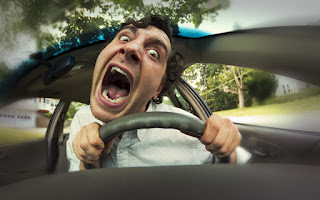 My point being, is that people are starting to live online, even if they're out 'n about, they're more attached to their devices and in tune to what others are doing or who they are spending their time with. There are more "fights" ---and vicious ones online. The keyboard warriors will strike at any moment, but they won't approach you face-to-face. It's the same kind of deal with road rage. People are brave in their cars, because they feel that somehow, that car can zoom away from the situation after they've flipped a bird or two. But when the traffic light turns red and there's nowhere to go, a very dangerous confrontation can take place, some even deadly. I'll never forget the time my ex-boyfriend picked me up to go out on a Friday evening. Some guy in a utility work car cut us off. At the age of 17, I flipped him the bird. Well, he not only stopped in the middle of the road---he maneuvered the car to where we couldn't drive past him. He took my boyfriend out of the car, literally held him by his neck with his feet not touching the ground, and luckily, our friends were right behind us---very muscular wrestling friends who scared off this angry guy. We got away with it, but what if our big 'n buff friends weren't there for us? 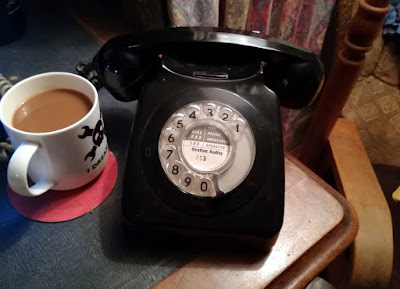 How I wish we were living back in the good ol' days---the days of no cell phones, where we literally had to walk out of our houses to keep in touch with our neighbors, friends and relatives. I'm going to date myself by saying this, but I grew up in a time when we had party lines. NO, not the 'dating party lines.' Our rotary phones were all connected to our neighbors' phones too. So when they got a call, our phones would ring as well with a slight different ring to it. Sometimes, you can hear someone eavesdropping on you, which was kind of creepy. So the good ol' days weren't perfect either, but they were much simpler times.
The Takeaway 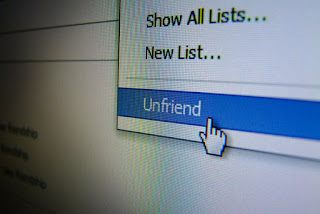 So before you "unfriend" or tell someone off online, ask yourself this question first: would I do this in person. Would I walk up to them and say, "I'm not your friend anymore," or would you approach a complete stranger who happens to be voting for someone different and call them a bunch of names your mama would cringe at? It doesn't take a lot to communicate. Even if you have differences with somebody, remember, we have more in common than not. It's so worth it to talk it out like civil human beings, rather than push them away or verbally attack them for an unshared opinion. Why can't we respect each other's views and beliefs, even if they aren't our own? What about telling your friend why you're "unfriending" them electronically? A good talk over a cup of coffee is much better than tapping the 'unfriend' button over something that may just be a misunderstanding. Even if things didn't get resolved, you walk away knowing you had the courage to have that conversation, as we all did back in the 70's & 80's. Ok, time to take my Geritol and call it a day.
Be kind, rewind.
(And if you didn't understand the above, you're too young to read my blog!) <insert laughing emoticon>
For more of Deb's articles, please visit: www.debrapasquella.comor join her on Facebook and Twitter. Check out her cooking blog at DebsCucina.comfor some of her famous recipes!