Lately, I've been noticing how people are twisting this pandemic into something political. They're also using this pandemic to fight it out because some people have an axe to grind for whatever reason.  There are a whole lotta' "Karens" in our world, as we have to just take it in with a grain of salt. I've seen most fights and debates over social media, and some that were in a flower and garden shop that absolutely took me by surprise. Why are we fighting with one another? I remember when we all came together after the tragic day of 9-11, so why are we trying to kill one another? You have people who think they're an expert with the virus itself and apparently, they've all been to the labs and factories while workers made masks to protect others from getting ill...or, the question is, do they protect?

Nobody really knows. That's why you get mixed messages.

People who take the time and effort to publicly shame others for wearing a mask or not wearing a mask are doing it out of fear. Here's my ~opinionated~ reasons why: 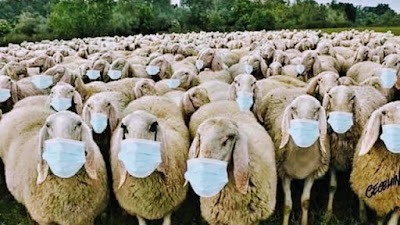 The other day I was watching a video where this woman literally hid behind a pile of carts at a Target, "baaa-ing" at people, calling them "sheep" for wearing masks. What would provoke someone to take their time and do something like this? I actually believe there are people out there going crazy at home and they're bored out of their minds. Get a hobby for the love God! It doesn't even make sense why this woman did this. It just shows me people have lost touch with their ability to remain somewhat sane throughout this 4 month lockdown. I get it, even though I love staying home and work from home, I was forced to stay home and not visit my friends or family or even go out to my favorite restaurants. It gets to you. We all know. Even if you're an essential worker, that doesn't even qualify for "socializing" because they're out there working in fear, braving it and helping those who cannot work. 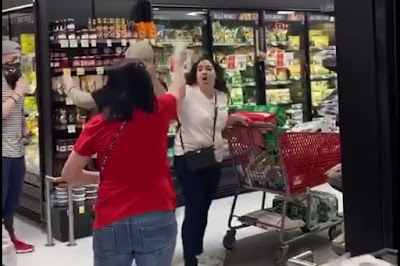 I will never forget the video I saw based in Staten Island. I used to stay with my cousins over in Staten Island and they ain't playin' around. Those are some tough folks, especially the women! Staten Island is close to my heart, but what happened at this grocery store was absolutely shameful. They saw a woman in the aisle not wearing a mask, so a bunch of women, including a couple of men starting yelling and pushing her around, saying, "Get the f*** out of here!" I have never seen people act this way---only with the toilet paper issue, which is a whole other can-o-beans. But the overall barbaric behavior from grown adults is really scary. It feels like our society has truly broken down and not only has this virus destroyed lives physically, but it's destroyed the very core of our existence---to come together as a community, as a civilization and not kill each other over something so 'fixable.' Personally, I always wear my mask when I enter a store. That's for you, that's for your son's compromised immunity and it's for your grandparents. I see it as a shield that "may" protect others. I can't say if they protect 100% because I'm not a scientist, nor a virologist, as others seem to think they are.

There seems to be a trend of poking fun at people who still want to social distance, especially if it's with your family and friends who do not live in the same household. For me personally, just because New York has had a major decline of infections and mortality rates, I will still isolate and social distance until I know for sure that this virus is gone, gone gone. If you're upset that someone in your family or one of your friends are shying away from invites, you have to excuse them. FaceTime them, or give them a call to chat with them. They're not okay with this either. Even though I never judge anyone who chooses to be around a lot of people without masks, I have the right to choose whether or not to see them. If I see on your social media that you're in a huge group without a mask, you're not going to see me for a very long time. I don't like it either, but I'm just not as lax as some people are. I don't get it---I see people hugging in groups and having these big parties, and then they ask, "Why don't you come by?" I can't! I won't! There's a pandemic out there and as much as I'd love to spend time with my loved ones---I have to be sure that this thing is over and done with. My better half is the same way. She even went back to work, and although she doesn't feel the masks are effective, she wears one anyway because she is not sure, and she wants her customers to know that she cares about their feelings. When she gets home, she takes off her shoes in the garage and enters the home that way. She throws her clothes in the wash down in the basement and washes her hands before seeing me. Even though she's very cautious, I get a little anxiety about being in an office for 8 hours a day around people---even if it's limited capacity.

It all boils down to respect. Everything I wrote above---it's all about respecting people. I know you have your set beliefs, and you think others should have the same as you, but that's not possible. If someone in a store isn't wearing a mask, I don't publicly shame them. I simply walk away. You can do the same thing as well. If someone is wearing a mask, and you have the urge to make a "baaaaaa" sound, then obviously, you're not socially equip to handle society right now.

It doesn't hurt to be kind. Whether you think this virus is a "plandemic" or a "pandemic"---treat people the way you want to be treated, usually left alone. I mean, your freedom of speech is your right, but when does it get to the point where you're just indirectly throwing your anger at those who have no clue what you're angry over? It's not even about the masks, is it?

For more of Deb's articles, please visit: www.debrapasquella.comor join her on Facebook and Twitter. Check out her cooking blog at DebsCucina.comfor some of her famous recipes!