You're Gay & Voted for Trump? 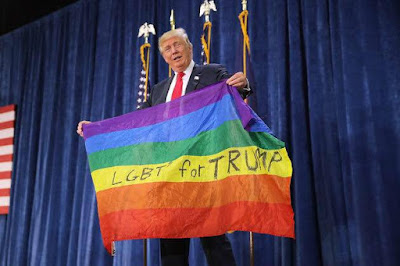 The other day someone asked me if I wanted kids. And while I've stated before that yes, we did at one time, I just can't get myself to raise a child in this crazy world. It's an era of entitlement. It's a time when those who don't get their little needs met, they pout, scream, throw a tantrum, and as adults, protest and wreck other people's properties. We live in a world, where if someone gets either fired, or offended, they're likely to walk into the building that you're in, shooting you and the rest of the people standing nearby. We live in a world, where we don't care about terrorism, but we care about people accepting us "as we are", even if we identify ourselves by a third or fourth gender, and beg for America to accept that. By all means, we should be accepted, but not irrationally accepting those who want to go above and beyond the means of science. But hey, religion isn't science either, so there's that. 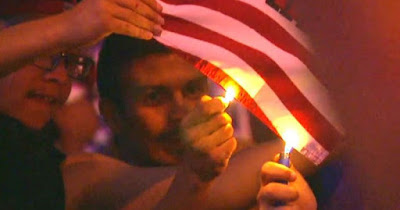 The crowds forming down on the streets are all chanting, "F*** TRUMP" and "F*** THE COPS". They want rights. "Hey, it's freedom of speech man!" But what does their freedom mean? So as they take to the streets, destroying other people's properties, they scream in horror because one of their leaders just got arrested.

"He got arrested and he didn't do anything!" 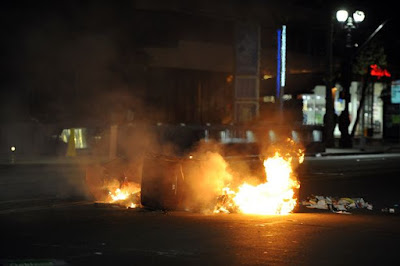 Whether he did it or the 253rd person did it, he was responsible for the small portion who ruined property that costed much more than his own apartment rental. But I digress, he probably still lives in mom's basement and most likely, didn't vote at all. And that's where the problem lies. These kids are trying to make history by doing things in such a drastic way, but in this day of age, all it's ever going to do is destroy their future by getting arrested which goes onto their records, and possibly thrown in some psyche ward if they decide to act out. That goes on their record too. But they don't care. They don't care about their own future.

Just last week I overheard a younger woman in the restaurant we were at saying, "Oh yeah, watch -- when Hillary wins, Trump is gonna keep saying, 'It's rigged!'"

And now look what's happening? People are now saying that the polls were rigged and that Trump didn't win fairly. They're also trying to rid of the electoral college, which to be honest, I don't quite understand why they even have that. But right now, we have to accept President Trump. We have to move on, connect with one another, unite...not fight. We have to move past the stereotypes of what a "republican" means and draw forth a new and much more progressive party.

"But aren't you concerned about your rights? You're a lesbian and married to a woman. Aren't you afraid that he'll repeal marriage equality?"

No. Not at all. And I will tell you why it doesn't scare me: congress and the states pass those laws, not the president.

No. He is OK with those who want to live (by choice) a heterosexual lifestyle, voluntarily. He believes in Freedom of Religion. A small business owner, like a bakery can refuse to make a cake for their wedding due to their religious background. Walk out, and go to another bakery. You cannot force people to do things for you.

"Oh but that was an inside job!"

OK, then we get rid of the establishment, who's to blame for this conspiracy theory.

I also fear Sharia law has already been established here in America. And if anyone is against it, they're called an "Islamphobe". Do you even know what the Sharia law stands for?


"But Trump's a racist! Isn't your wife Latina?"

No, he is not a racist. Twist and turn the words all you want, but he is supportive of every nationality. He wants to tighten our borders, because yes, they ARE bringing in drug dealers and rapists. It's all there documented if you want to research that for yourself. He is not against black people. He is not against Mexicans. He is against radical Islam, but not against Muslims. Did you know that there are many Muslims who support Trump? Did you know there are gays, blacks and Latinos for Trump? It's because they did their homework, instead of hearing what they wanted to hear. They chose to listen, instead of twist the words. They chose to look at his policies and promises to protect our country. Aren't you tired of being scared here in America? I am.

As a lesbian woman married to a Latina woman, we were happy when Donald J Trump told us that he supported the LGBT community and that he would help fight for us. We were way too concerned about Hillary supporting countries who kill gays and lesbians. She's okay with that. I'm not. She was very adamant on her stance that a marriage should only be between one man and one woman. End of story. Trump has always helped the LGBT community, and now promising to help us with our rights. I'm not worried about Mike Pence. Most vice presidents really can't make those types of decisions.

I'm not rich, but I don't believe we should be taxing the wealthy just because they have more dough to spare. That's wrong. Whether they worked their butts off to get to where they are, or if they're from money -- it's not YOURS. I don't know why some Americans feel entitled to other people's hard work or inheritances. I will never understand that.

My parents had three children. As they were getting older, seven years later, my mother went to the doctor because she felt sick. When test results came back in, the doctor informed her that she was pregnant with me. She already went through the hardest parts of having and raising three children. SEVEN years later, now this? I'm sure it was a hard choice. She was young, in her mid-thirties now facing another sentence of raising a child. She didn't choose to abort me. She chose to have me, and when she did -- it was the hardest labor of all, because I was a breech baby. During a snowstorm in February, my foot came out. It was then she knew what was about to happen. Long story short, my mother and I shouldn't be here right now. It was such a traumatic birthing, that we were both in the hospital for a very long time. They had to literally turn me around in her belly. No c-section -- no pain meds. She went through pure torture. I respect that.

She waited it out, and she went through the most painful thing a person can go through. 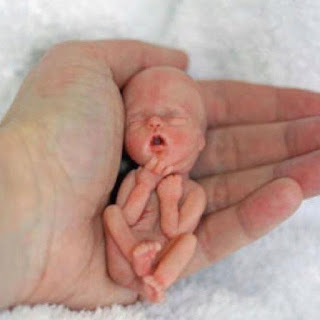 With that being said, I'm also pro-life. I cannot understand why a woman would want to abort a baby. I would beg them to wait out the nine months so that my wife and I can have it. I tried twice and miscarried both times. The first time I had a DNC, I went into a horrible depression. After medical complications, I finally had a hysterectomy. My point of this is, I understand people make bad choices, but this is a life! Hillary supports partial birth abortion. I can see if it's due to the mother's medical condition or a life threatening matter, but she also accepts this as a late term abortion. I do not agree with this at all. In fact, it is known that they use baby parts for scientific research, so the later the term, the more developed the baby parts are. It's disgusting if you really get into what Planned Parenthood stands for. In an interview, Daleiden said that “Planned Parenthood and their business partners know that the baby parts issue is the biggest scandal that they have ever faced and it’s the scandal that could take them down.” Please research it.  --- But I do understand if in terms of rape or incest, there should be some health options available early.

There's bigger issues here. I understand everybody has their right to their different views, but when you look at the facts and horrific turnout of what the democratic party stands for, it's gotta make you think twice about electing a candidate that supports all of this.

And that is why I voted for Trump. I put aside all the bad things said and done by each candidate, and went purely based upon my views as an American.

For more of Deb's articles, please visit: www.debrapasquella.com or join her on Facebook and Twitter. Check out her cooking blog for some of her famous recipes!
abortion blacks for trump Donald Trump gays for trump Hillary Clinton latinos for trump LGBT mexicans for trump Mike Pence muslims for trump pro-life Sharia law Trump Protests