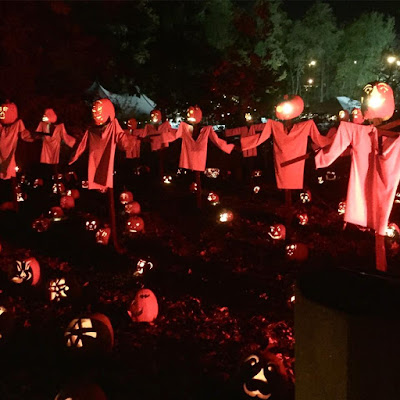 There's something inside all of us that makes us beg for our inner child to come out. It can come in the form of a temporary excitement, like a holiday, especially Christmas, or even reliving your own child's life events. There's something comforting about being in that "space" if you will. I don't have any kids, so I don't get many opportunities to relive my childhood. I've been "adulting" too long. And not that it's a bad thing, because looking back, I had the best childhood. But now that I'm all grown up, I kind of miss all the fun as a kid and all the childlike wonder and seeing things in awe. It all kind of faded out in the distance as I grew up into reality -- into a world of 'cmon, be realistic' type of mindset. Having a child at least gives a parent an outlet to be a kid again. 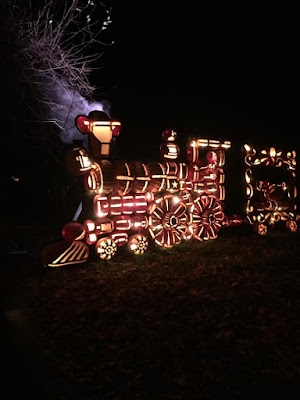 My wife is a total kid. That's why I love her. I don't know how she does it, but she just loves to go to kid events. I roll my eyes as she begs me to do these God awful things with her, like attending fairs, and just recently, The Great Jack O'Lantern Pumpkin Blaze. For an agoraphobic to be in the midst of thousands of people (and screaming little children) is not my idea of fun. I'm not trying to be a "Debbie Downer", but I'm one of those types of people that'll give you the stink eye if your kid is crying and screaming in a restaurant. And now that I was on their territory (so to speak) -- I couldn't complain about screaming kids. I had to become one with them. So as we started to form a long line to hand in our tickets to get into this event, my anxiety was creeping in with each scream, cry and tantrum a child gave off because they were getting impatient. Double strollers, kids losing their parents in the pitch dark and parents screaming at their kids to behave -- it was a scene that I have always dreaded. 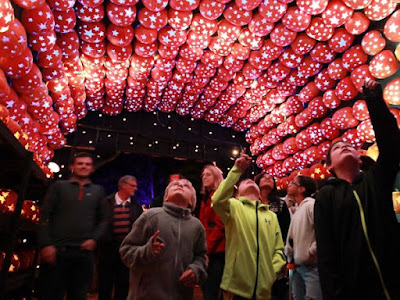 When we finally entered the dark stone path leading up to all the pumpkin sculptures and scenery, it was hard to stop and take pictures. Some kid would plow into you while other children plowed into them, causing this strange and clumsy domino effect. Then, the road narrowed into this uphill climb with no lights guide us -- just a candle in a lantern every so often as we passed by a pumpkin cemetery scene. Then the line got stuck -- in the pitch dark! So I felt my heart race as my mind said, "Well what if there was an emergency -- how would we get out?' Most agoraphobics need to have a "way out".  All the thoughts started racing until I heard this little girl in front of me, she had to have been about four of five years old. She said, "Look at the stars, mommy," with her little tiny voice.  As I looked up, there were a million bright stars that lit up the entire sky. It even lit up the path we were on. It was so magical. I was more impressed with the sky than I was with the art work that we could barely see. 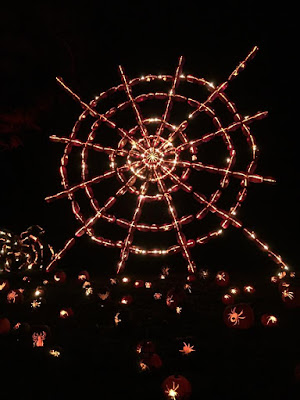 Thing is, she was more impressed by God's creation than she was with a manmade carved out pumpkin patches full of zombies and dinosaurs. The whole time, this little girl was just looking up at the sky, not noticing the lit up and scary pumpkin faces. Somehow, she made me forget about my own anxiety, which made me look up into the sky, reminding me that God was with us. I believe angels come in many different forms. This little girl was indeed, my angel.

The line started to move slowly, as we were herded in like cattle. I didn't mind though. My agoraphobia was gone. I was enjoying the crisp fall air, and I was actually admiring and appreciating all the work that went into these hand carved pumpkins and scary sceneries. The property itself was surrounded in old stone paths and beautiful hills of greenery -- it was so magical. I began to see things wth a childlike wonder. I got excited over different sculptures and a house that was lit up in different colors with jack o'lanterns that sat on every ledge. 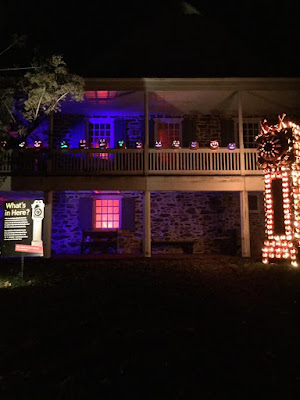 I also heard my mind say, "This is not a means to get from here to there, it is to enjoy the NOW which is all you have. Stop suffering." And I did. I stopped suffering through it, and started to enjoy every moment. We then came to a huge tent that probably held about 300 people in it. Madelene and I had to hold hands so that we wouldn't lose one another. Again, you're talking about a severely agoraphobic person who does not like to be in the midst crowds. But somehow, it made me feel connected. It made me feel like I was one with all of them. We were all at this event together, enjoying everything it had to offer. The energy of the entire event was so incredibly positive and upbeat. Even the workers were excited to be there. The people who guided you to park were dancing as they led you into your lot.

I could've complained the whole time and let the negative thoughts seep in. Instead, I saw a different way of looking at something that would've typically put me into panic mode. I did it in fear, and when I didn't resist, it didn't persist. The fear left me -- left me with a childlike wonder -- left me with a warm and calm feeling that yes, I can do this again.